The character of Ziggy was originally created back in 1968. Ziggy is regarded as a lovable comic character that runs into a lot of misfortunes in his life. While not the most popular comic character, Ziggy has remained pretty popular throughout the years which has lead to quite a bit of merchandise. One of those pieces of merchandise is A Day With Ziggy Game. Having never read any Ziggy comics I did not have high expectations for the game since it looked like another generic spin and move game. I was intrigued by one of the game’s mechanics though so I held out a little hope. A Day With Ziggy Game has an interesting mechanic for a spin and move game but ultimately ends up as another luck driven game typical of the genre.

How to Play A Day With Ziggy Game

A player begins their turn by spinning the spinner. The player will move their playing piece the corresponding number of spaces clockwise around the board. 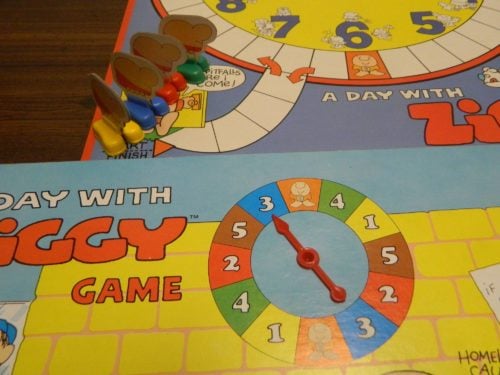 This player has spun a three so they will move forward three spaces.

If a player spins Ziggy on the spinner or the player lands on a Ziggy space, they draw the top Ziggy card. 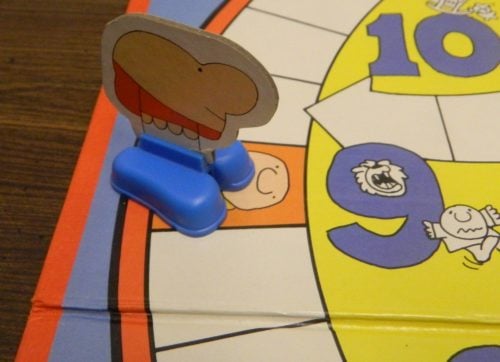 This player has landed on a Ziggy space so they will draw a Ziggy card.

The player reads the card and takes the appropriate action. 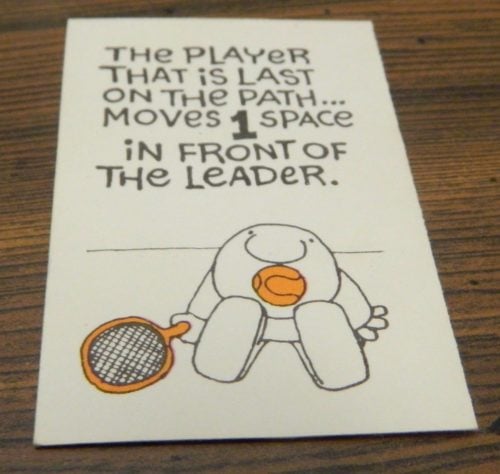 A Ziggy card has been drawn. The player in last will move one space in front of the leader. 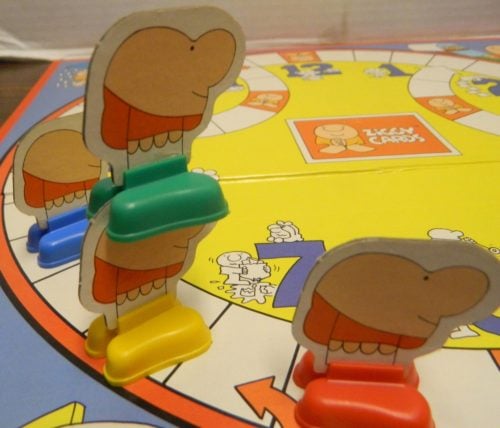 When a player lands on a space that features an arrow, the player must follow the path that the arrow points to. 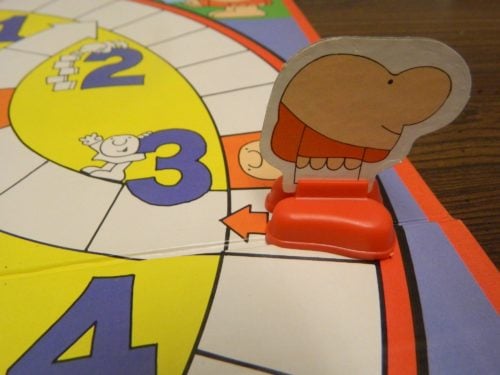 The red player has landed on a space with an arrow so they will have to travel down the path that the arrow points to. 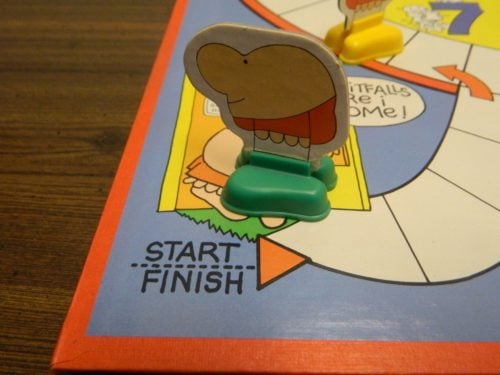 The green player has reached the finish line so they have won the game.

My Thoughts on A Day With Ziggy Game

Heading into A Day With Ziggy Game I knew it was going to be a lot like your typical spin and move game. Players take turns spinning the wheel and moving around the board. The reason that I have never been a huge fan of spin/roll and move games is that there is usually very little to the actual gameplay. Outside of cheating there is no way to impact your odds of winning the game since it all comes down to who rolls/spins the best.

The one hope that I had for A Day With Ziggy Game is that it actually has a mechanic that I really haven’t seen much in other games from this genre. While I knew the piggyback mechanic wasn’t going to revolutionize the game, I thought it was interesting since you don’t see a lot of games that have used it. Especially back in 1977 I don’t know if there were any other games that had used a similar mechanic. I give the game’s creators credit for actually trying to add something new to the game. Most of the licensed games from this era were fine with just being quick money grabs that took a basic roll/spin and move game and pasted the licensed theme on it. The creators of A Day With Ziggy Game actually put some effort into creating something new.

While the piggyback mechanic is unique, I don’t know what to think about it. I like that it makes the game feel a little different from the other games in the genre. It is kind of fun being able to ride on another player’s coattails as they move around the gameboard. The problem is that the mechanic gives players that are able to use it a pretty big advantage in the game. By piggybacking on another player you basically get an additional turn. In our game this usually only lead to a couple free spaces but it could lead to players getting four or five free spaces. If a player could piggyback on two players at the same time they could get even more free spaces. I wouldn’t have a problem with this if landing on another player actually involved some skill but it relies entirely on luck. This makes the game rely on even more luck than the typical spin and move game.

It is not just the piggyback mechanic that adds a lot of luck to the game. I actually think the Ziggy cards rely even more on luck. While there are some cards that only move you forward or back a couple spaces, there are plenty of cards that totally change the game. There are several cards that take players immediately to the front or back and there are cards that let players swap positions. I don’t mind the cards adding a little randomness to the game but they go way too far in my opinion. A player could end up winning the game solely because they drew the right card at the right time.

The cards could also have used a little more clarification at times. The cards are easy to follow but it feels like the designers didn’t consider all of the possibilities when creating the cards.  Here is a quick example to show you what I mean. Several of the cards in the game have a player move their pawn forward to the next hour or back to the previous hour (the gameboard is set up like a clock). For most of the game this isn’t an issue as it is really straightforward. When you get near the entrance/exit though these cards become a lot more contentious. At the beginning of the game you could go back an hour and end up on one of the last spaces before the exit. At the end of the game you could be sent forward an hour and end up moving past the exit. If you follow the cards directions to the word you would have to allow both of these situations which would totally break the game. I am guessing that neither were intended by the designers since one lets a player win in a couple turns while the other basically guarantees that the player has no chance of winning the game. Before playing the game players are going to have to create house rules to address these issues.

After you take away the piggyback and card mechanics you are left with your typical spin and move game. The game relies on a lot of luck as all you do is spin and move. This leads to a boring experience for adults. With how simple the game is though I could see young children enjoying it. The game is simple enough that younger children should have no trouble playing the game. The game has a recommended age of 7-10 but I am guessing the only reason that is it not younger is due to having to read the Ziggy cards. In addition to being simple the game is really short. I would say that the game takes at most 15 minutes to play.

As far as the components I would say that they are pretty typical for this type of Milton Bradley game. Most of the components of made of cardboard except for the plastic feet. The quality is okay but also feels kind of cheap. I am not a big fan of the spinner being attached to the cardboard divider as while it makes it harder to lose, it is a hassle passing the large cardboard divider around the table. I would say that the best thing about the components is that they actually do a good job supporting the game’s theme. Fans of Ziggy will like the game’s artwork. I think the game deserves a lot of credit for the cards since each card includes a unique picture on the text side which is more than I expected from the game.

Should You Buy A Day With Ziggy Game?

I had hopes that the piggyback mechanic was going to differentiate A Day With Ziggy Game from other spin and move games. While I give the game credit for coming up with a unique mechanic, it doesn’t really add a whole lot to the actual game. It can give players a pretty big advantage in the game but ultimately just adds even more luck to the game. The Ziggy cards find a way to add even more luck to the game since one card can drastically change the outcome of the game. This is in addition to the luck inherit in a spin and move game which makes the game rely almost entirely on luck. The only redeeming qualities for the game is that it is easy to play and takes only around 15 minutes to finish. The game also does a good job utilizing the game’s theme for the components.

Unless you love Ziggy or generic spin and move games, I can’t see you enjoying A Day With Ziggy Game. If you love Ziggy or for some reason really like 1970s licensed games you may get a little enjoyment out of the game. I still would only recommend picking up the game if you can get a really good deal on it.

If you would like to purchase A Day With Ziggy Game you can find it online: Amazon