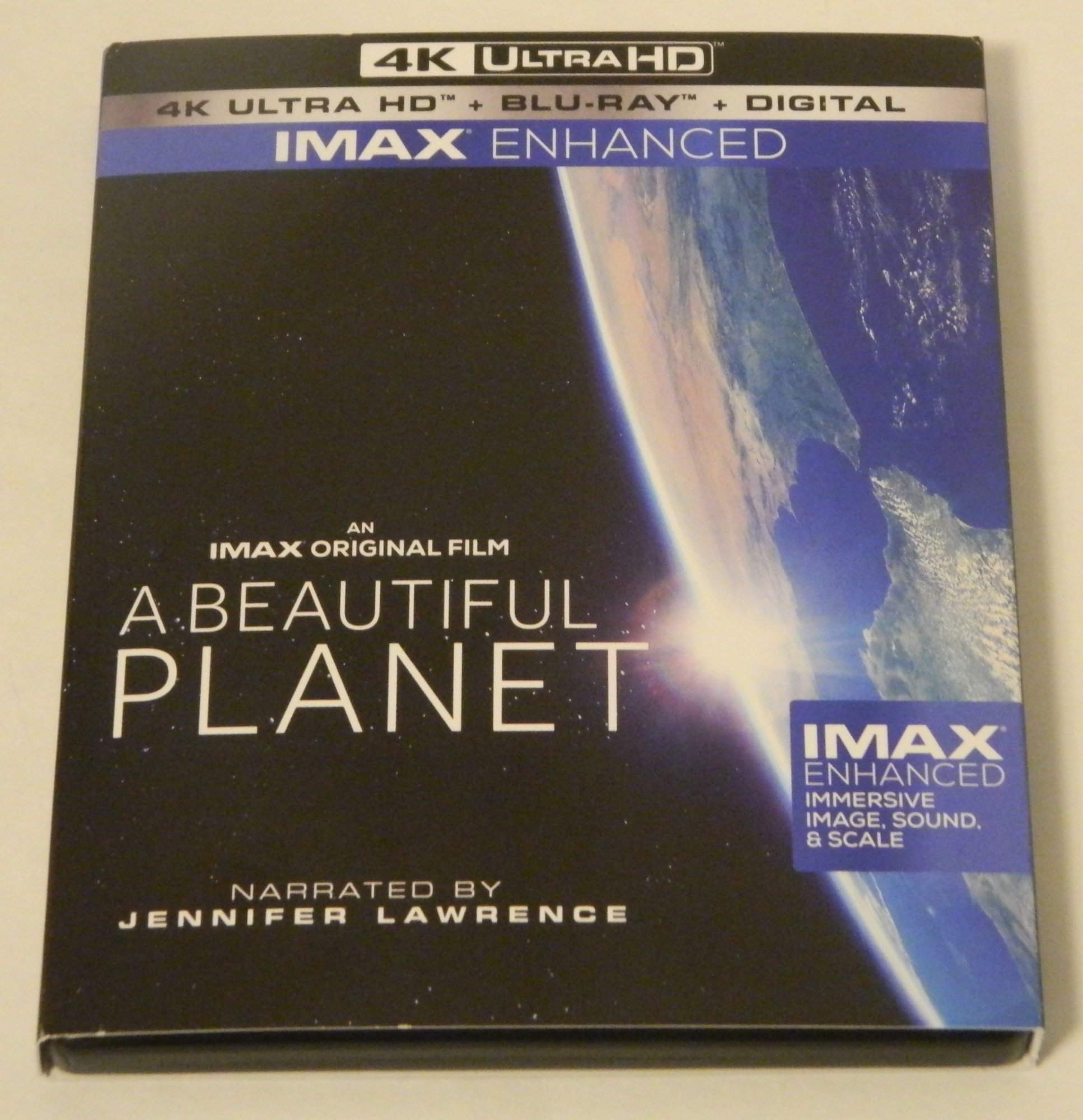 IMAX films are usually some of the best movies to test out a new format or home theater setup as they are always amongst the nicest looking and sounding films out there. For my first 4K Ultra HD viewing, I chose A Beautiful Planet. While the difference between 4K Ultra HD and Blu-ray is nowhere near the jump that DVD to Blu-ray was, A Beautiful Planet is a gorgeous film that I would highly recommend watching. It looks amazing in both 4K and Blu-ray so even if you don’t have a 4K player, it is still worth a purchase.

A Beautiful Planet was released on IMAX back in 2016 but is just now getting its first home video release on 4K Ultra HD and Blu-ray via Mill Creek Entertainment. Along with Journey to the South Pacific (which was released on the same day as this title), it is one of the first two 4K Ultra HD titles released by Mill Creek Entertainment. The concept of A Beautiful Planet was to have astronauts (from Expeditions 42-44) on the International Space Station (ISS) film our gorgeous planet from above. However, A Beautiful Planet wound up being basically two films in one. Half of the focus of the film is on the beautiful aerial views but plenty of time is also spent on the astronauts’ lives on the ISS as well.

The aerial footage of our planet is gorgeous but I’m actually glad that they decided to focus on the ISS itself as well. While the footage is breathtaking, it probably wouldn’t be enough for 46 minutes of run time. It would have likely got boring after the thirty minute mark. The International Space Station content is quite compelling featuring fun stories like the missing torque wrench and how the astronauts celebrate the holidays (they leave Santa’s milk and cookies out in the airlock in case he shows up). The ISS content is kind of brief but there are definitely some anecdotes I hadn’t heard before (and I’ve already watched a few documentaries about the ISS). However, if you want a really in-depth view of life on the ISS, watch A Year in Space or one of the many other documentaries on the subject.

The biggest draw for most people that A Beautiful Planet has to offer are the gorgeous vistas that shooting from the ISS can provide. There is some very cool and amazing footage in this release, from a scene showing what thunderstorms look like from space (absolutely stunning) to the stark difference between North and South Korea (very striking). You also get to see a hurricane from space, various night shots of cities (though they could have offered a few more of these), an amazing aurora scene, and a cool (but terrifying) simulation of what our planet would look like without water. Considering the astronauts’ lack of experience with filmmaking (though they did train with IMAX cameras before leaving for the ISS), they all did a pretty great job of cinematography. I’m sure a real cinematographer could have done an even better job but that would require them being in pristine shape, training like an astronaut, and knowing their science in order for them to be useful on the ISS. I kind of doubt that would be possible.

Considering the beautiful shots in this film and the fact that this is a 4K Ultra HD release, video quality is obviously a very important element to my recommendation (probably the most important aspect). Luckily, the video quality is amazing and exactly the kind of pristine quality you would expect from an IMAX release. A Beautiful Planet is absolutely one of those releases you would use to show off your new 4K Ultra HD player. Every scene is gorgeous with absolutely no issues that I could detect. If you don’t have a 4K Ultra HD player just yet, don’t worry as the Blu-ray included in this release looks amazing as well. 4K is a much smaller step up in quality from Blu-ray than DVD to Blu-ray was. While I could tell the difference between the two discs in this release, it wasn’t a huge one as the Blu-ray looks amazing as well (one of the best looking Blu-rays I’ve seen in fact).

A Beautiful Planet also offers DTS X sound. Unfortunately, I don’t have a very good audio setup in my home theater just yet so I can’t really fairly judge the film in this area. From what I could tell though, the sound seems pretty solid. This release also offers three bonus features, though all of them are very short:

A Beautiful Planet offers a good mix of beautiful footage of our planet shot from space and a look at life on the International Space Station. While the ISS content isn’t as in-depth as other documentaries on the topic, it is still fun to watch and helps break up the overhead views of our planet to keep those scenes from becoming boring. A Beautiful Planet is gorgeous both on 4K Ultra HD and Blu-ray (you get both in the same release), so even if you don’t have a 4K setup just yet it is still worth purchasing. Highly recommended.

A Beautiful Planet was released on 4K Ultra HD and Blu-ray on December 11, 2018.