One of the most surprising games that I played in 2016/2017 was 5-Minute Dungeon. What I liked so much about the game was that it was an innovative dungeon crawling card game where each dungeon only took five minutes to complete. The game does such a great job creating a cooperative dungeon crawl as players work together to play the corresponding cards to defeat the monsters and obstacles that stand in the way of the final boss. I ended up giving the game a 4.5 and I regularly debate whether the game deserved a 5/5. Well its time to head back to the dungeon as a new expansion for the game is launching on Kickstarter on May 22nd. 5-Minute Dungeon Curses! Foiled Again! takes the already excellent gameplay of the original and adds in some intriguing twists to make the game more challenging.

In addition to the normal setup for 5-Minute Dungeon, these additional steps are needed for the expansion.

When a curse card gets turned over it is set to the side of the boss mat. One player then turns over the next card in the dungeon. The curse card stays in play until a player is able to successfully remove the curse. Multiple curse cards can be in play at the same time. 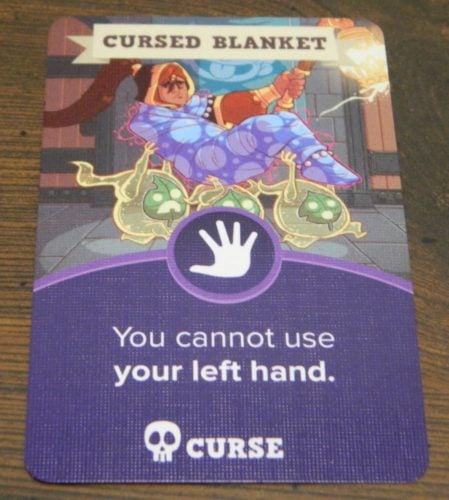 When this curse goes into effect none of the players can use their left hand.

If at any time a player disobeys an active curse, the player has to place their entire hand into the pile of used cards (not the discard pile). The player also has to take back their illegal action if possible.

For each dungeon the players will have access to one artifact card from each colored hero not used by one of the players. These cards give the players a one time use special ability that they can use at any time during the dungeon. When the players want to use the artifact they flip the card over and take the corresponding action. Once an artifact has been used it cannot be used again until you get to the next dungeon. At the start of each new dungeon flip all artifacts to the colored side to show that they can be used again. 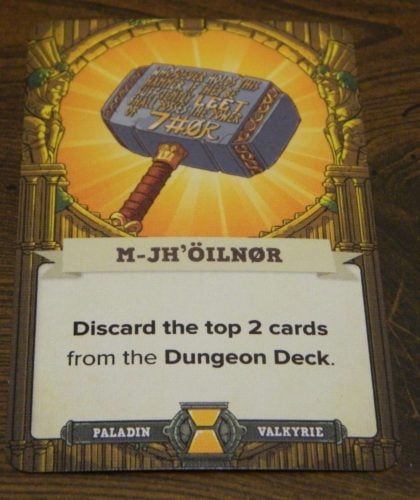 The players can use this artifact card to discard the top two cards from the dungeon.

The druid/shaman have infinity resource cards which count for an unlimited number of resources of the pictured color. 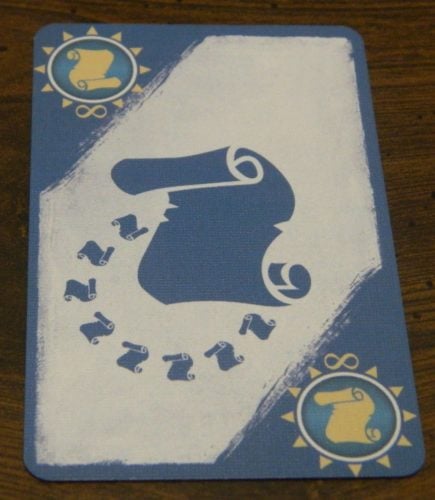 This card will act as an infinite number of scrolls.

Instead of rehashing what I said in the original review, I want to spend this review of 5-Minute Dungeon Curses! Foiled Again! talking about what the expansion brings to the table. The expansion basically brings four new things to the game.

First lets look at the expansion’s namesake, the curses. Basically the curses act like event cards that stay in effect until a player plays a card or uses their ability to remove the curse. I was actually a little surprised by how much the curses added to the game. They do a really good job mixing up the gameplay and throwing a wrench into your strategy. When a curse card comes up it can totally change how you are going to approach the game until you are able to get rid of it. To keep some of the surprise intact I won’t go into detail of all of the curses but I want to give you a quick glimpse of two of the curses you can find in the expansion.

One of the first curses you will encounter is the “Cursed Blanket”. The Cursed Blanket prevents you from using your left hand until you remove the curse. Being right handed I didn’t think this would be that big of a deal but I quickly realized it is a bigger deal than I was expecting. It is quite hard trying to hold cards in your hand and playing them at the same time when you only have one hand available.

Another interesting curse comes in the second boss fight with the curse “Waffles Waffles!”. Waffles Waffles! limits your vocabulary in the game to the word “waffles”. If it wasn’t already obvious to you, it is hard to communicate strategy with the other players if the only word you can say is waffles. You either are going to have to be really creative in how you use the word waffles or you will have to find new ways to communicate with your teammates.

While I won’t spoil the other curses, I will say that there are even more sinister curses the further you advance in the game. These curses are one of the main reasons that 5-Minute Dungeon Curses! Foiled Again! makes the original game more difficult. If you liked the original game but are finding the game to be getting too easy at this point, the expansion does a really good job making the game more challenging for players who are already really familiar with the game.

The curses are just some of the new boss cards that are added to each dungeon during setup. Each dungeon boss has their own set of five cards which are always added to the dungeon deck and for the most part make the game more challenging. I would say that most of the boss cards are event and curse cards but there are a couple additional mini-boss cards thrown in as well. These cards really up the difficulty of the game as they are some of the hardest cards in the dungeon deck. The game’s instructions recommend you be familiar with the original game before using them. I strongly second this recommendation as they will make it hard to complete a dungeon if all of the players aren’t already familiar with the game.

After the boss/curse cards, I would say that the second biggest addition in the expansion is the addition of the sixth set of heroes: the druid and shaman. By adding a sixth set of heroes it allows up to six players to play the game at the same time while also giving players more choices for which hero they want to play. In general I would say that the druid/shaman deck is a balanced deck as it doesn’t have a color that is favored over the others. Based on the character’s special abilities and action cards I would say that their emphasis is on getting rid of curses and allowing players to take cards out of their discard pile.

The thing that I like most about the druid/shaman though has to be the infinity resource cards. The infinity resource cards count for as many symbols of the corresponding color as you need for the current dungeon card. These cards are really powerful when you need two of more symbols of the same color. They are particularly useful against some of the mini-bosses and final dungeon bosses. The only problem I had with them is that they make you want to save them for as long as possible even when it is more prudent to use them rather than save them. I can see the druid/shaman being a hero that one of the players are likely going to use each game.

The final addition to 5-Minute Dungeon Curses! Foiled Again! is the addition of two action cards to each of the five original hero decks. Two cards might not sound like a lot but they likely will be the two most powerful cards in their corresponding decks. While there are only two action cards for each deck, I like the variety they provide and they can really help the players when they get into trouble.

So now that we have gone through all that 5-Minute Dungeon Curses! Foiled Again! has to offer, what did I think of it? Well if it wasn’t already clear I enjoyed the expansion quite a bit. The expansion doesn’t drastically change the game but it does a good job adding some new mechanics that tweak the gameplay for the better. The expansion also increases the overall difficulty of the game which will probably be welcomed by people that have mastered the game. Basically if you liked the original game like I did, I think you will really enjoy the expansion as well. On the other hand if you didn’t really care for the original game, I don’t see Curses! Foiled Again! changing your mind.

While I really enjoyed 5-Minute Dungeon Curses! Foiled Again! I did have a few minor issues with the game.

With how much I liked the original 5-Minute Dungeon I had high expectations for its first expansion 5-Minute Dungeon Curses! Foiled Again! Despite my high expectations I was not disappointed. Curses! Foiled Again! might not drastically change the core gameplay but it does a really good job adding some tweaks to the formula while keeping the main gameplay intact. For the most part I would say that the expansion can be considered hard/expert mode for 5-Minute Dungeon as most of the additions make the game more challenging. The curses/boss cards add some of the most challenging cards to each dungeon which makes the dungeons harder and more entertaining. I really liked the addition of the druid/shaman as it allows six players to play at the same time while also giving the players an interesting new hero to use. The artifacts and new action cards also give the players some new interesting powers to help them overcome their challenges. Basically if you liked the original 5-Minute Dungeon I think you will really enjoy 5-Minute Dungeon Curses! Foiled Again!

The Kickstarter campaign for 5-Minute Dungeon Curses! Foiled Again! launches on May 22nd, 2018. For more information about the game check out its official website.