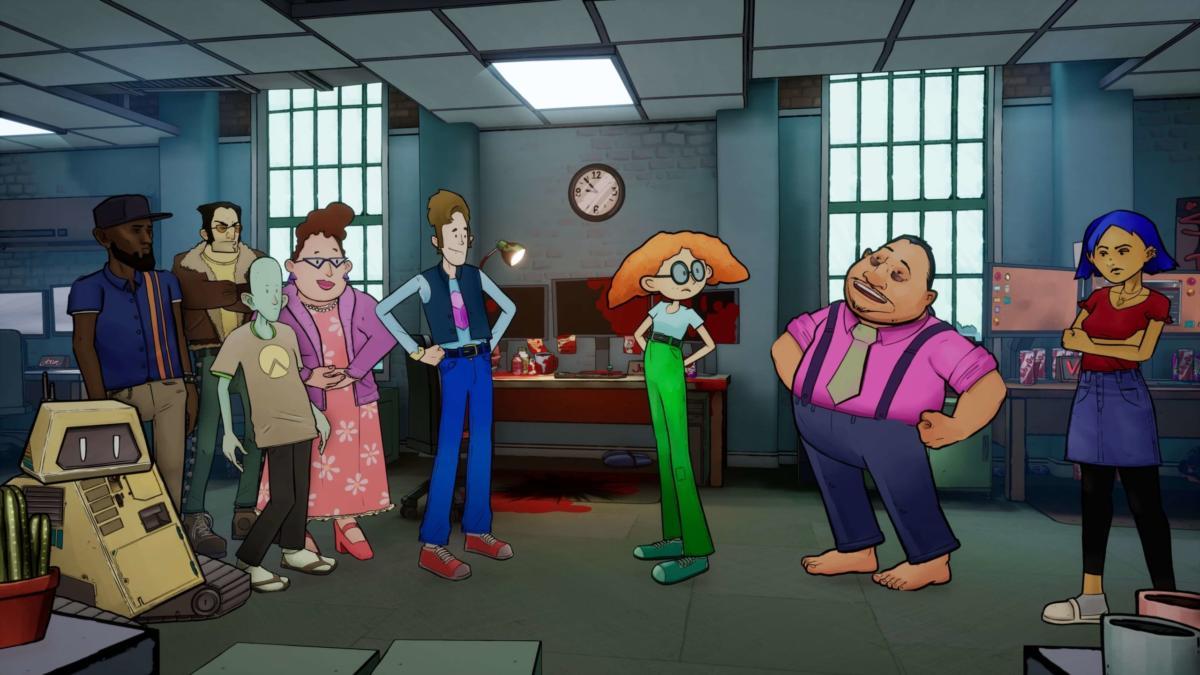 Last August the first season of 3 out of 10 released on PC as an Epic Games store exclusive. Billing itself as the first video game sitcom I was intrigued. The idea of making a story driven humorous video game in the style of a television show seemed like a really good idea. I ended up never getting to check out the game on PC, but with the today’s launch on the Nintendo Switch I was finally able to check it out. A name like 3 out of 10 doesn’t inspire a lot of confidence, but it far exceeds it’s title to create a funny video game sitcom filled with fun minigames.

3 out of 10 follows the indie video game studio Shovelworks Studios. As the title of the game implies, the studio is not known for making high quality games. In fact the studio has never made a game that scored higher than a 3 out of 10. The first season features five episodes focused on the studio’s development of their latest game Surfing with Sharks. Can the team finally make a successful game, or are they destined for another critically panned game?

When I first saw 3 out of 10 I honestly thought it looked like it would be a point and click adventure game. The game does have some adventure elements as you are able to explore the environment, talk with other members of the studio, and find Easter eggs to learn more about the game’s world and increase the number of stars that you earn. Outside of these elements though the game isn’t really a point and click adventure game. There really isn’t any puzzle solving and most of the exploration elements are optional.

Instead 3 out of 10 feels like more of a collection of minigames. Basically the minigames are built around the weekly hi-jinks that the studio gets into. They don’t really fit into a particular genre. Some try to replicate old video games, while others are built around genres more popular today. There are some basic puzzle games as well. Honestly it is kind of hard to describe the minigames as they are all quite different. The one thing that they all have in common is that they are quick (all take a couple minutes at most), and they only use a handful of controls.

With how many different minigames that 3 out of 10 features, they are not all created equally. Genuinely I had fun with all of them, but some were better than others. Most of my favorite mini games were built around classic video games. As a fan of video games since I was a kid, I could easily tell the inspiration for some of these games. In a way the mini games kind of remind me of Mario Party as all you need to know can be laid out on a simple static screen. Generally the premise behind them are quite silly, but they are pretty fun. Their difficulty depends on how much you care about stars as you can proceed no matter how poorly you do in a minigame. In some games it is quite easy to get all of the stars, while others require quite a bit of work.

While the minigames are a major element of 3 out of 10, I will say that I thought the driving force behind the game was its story. In a lot of ways the game is driven by its narrative. The game claims to be the first video game sitcom and it feels like it. While playing the game it kind of feels like you are playing an interactive sitcom. The story basically revolves around a video game studio that will rush any game to market no matter how good or bad it is in order to stay in business. The studio is filled with a bunch of quirky characters which means the story is mostly about the hi-jinks that they get into. While the story somewhat tries to recreate what it is like working at an indie video game studio, there are times that it relies on cartoonish elements as well.

I honestly think the story is the greatest selling point about the game. The story is obviously a comedy that is trying to make fun of the video game industry in general. This includes the process of making video games as well as popular video games and the community in general. I think a general knowledge about how a video game is made will help with your enjoyment of the story, but it is not required. 3 out of 10 is a genuinely funny game. The jokes might not always work, but it does a really good job making fun of the industry. The game features a bunch of quirky characters and enough ridiculous plots that it is hard not to enjoy your time with the story. I genuinely laughed quite a bit while playing the game.

The game’s enjoyable story continues into the overall theme as well. The game uses a quirky style, but I think it works well for the game. The character designs are creative and the game does a good job making boring office buildings interesting to look at. The game also includes a surprising number of cutscenes which look really nice. The game’s overall style honestly reminds me a lot of an animated television show.

I really enjoyed playing 3 out of 10. It is a little unfortunate that the game is pretty short though. How much time you will get out of the game kind of depends on what type of player that you are. This mostly revolves around how much you explore and how dedicated you are to getting all of the stars. Acquiring stars doesn’t seem to have any real impact on the game outside of bragging rights. The minigames usually only take a minute or two to complete. You really only have to attempt it once before you can move on with the story. If you want to acquire all of the stars though, it likely will take quite a bit more time. Some will only take a couple of attempts, but at least for me there were some minigames that required quite a few attempts in order to get all of the stars. The first season includes five different episodes. If you do the bare minimum I would guess you could finish most episodes within 15-20 minutes. To get all of the stars I would guess most episodes will take 30-60 minutes. I wish the game was longer as I was really enjoying it.

With the first season of 3 out of 10 being free on the Epic Games store, I was curious what extras the Nintendo Switch game would have as it retails for $10. It does feature a number of special features that kind of feel reminiscent of a DVD/Blu-ray. The game includes the soundtrack, and concept art like a lot of special editions. There is also a big head mode. The biggest feature is probably the free roam mode which allows you to find secrets and hear from the developers about the process that went into designing the first season.

I honestly don’t think I have ever played a game quite like 3 out of 10. It may look like your typical adventure game, but in practice it feels like more of a collection of minigames. The minigames are quite varied with some based on classic video games and others being more traditional minigames. Some of the minigames are better than others, but I generally found them to be quite enjoyable. The real selling point is the game’s story though. The game is trying to be the first ever video game sitcom and it succeeds in that task for the most part. The game mostly makes fun of the video game industry through a failing indie video game studio. I was genuinely surprised by how funny the story can be at times. Honestly the biggest issue that I had with the game is that it is just kind of short.

If you don’t really care for minigames or don’t care for narrative driven games, 3 out of 10 likely won’t be for you. If you are always up for some fun minigames combined with a funny story though, I think you will enjoy 3 out of 10 and should consider picking it up. I honestly can’t wait for the second season.