Since my copy of the game did not include the instructions and I couldn’t find a complete set of the rules anywhere, this description of the rules comes from various bits and pieces found on the internet. If there are any errors in these rules, feel free to leave a comment and I will gladly change them. 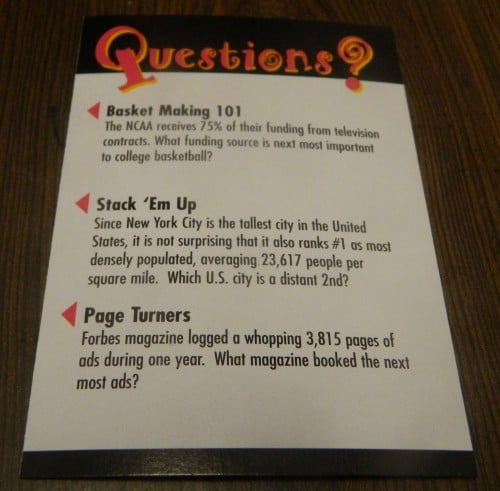 Here is a picture of a card from 2nd Guess. The current player is allowed to pick one of the three questions to try and answer.

Play continues until the predetermined number of rounds or score is reached. Whoever has the most points wins the game.

Are you sick of trivia games that insist on always providing the “best” answer? Why doesn’t second place get more love? Well the 2000 Great American Puzzle Factory game 2nd Guess decided to rectify that. In 2nd Guess the object is to try and find the second best for every question. For example a question in 2nd Guess is as follows: “Steven Spielberg and George Lucas rejuvenated the movie industry in the 1970s. “Star Wars” was the unquestionable biggest box office smash for the decade. Which 70’s movie was the 2nd in big box office bucks?”

While 2nd Guess tries to do something “new” with the trivia genre, it fails to be anything more than a below average trivia game.

The biggest problem with 2nd Guess is that it is just plain boring. Outside of the gimmick of having to pick the “second best”, the game adds nothing to the trivia genre. Unless you are one of the few people who have never played a trivia game, you have pretty much already played 2nd Guess. You just ask and answer questions earning points for correct answers. Since there are so many trivia games on the market, a trivia game needs to stand out in some way in order to be of any interest. 2nd Guess just doesn’t stand out in any way.

In addition to not adding anything to the genre, the questions in 2nd Guess are just kind of boring. I don’t know what it was but it just seemed like none of the questions from our game were particularly interesting. Due to the premise of the game, all of the questions had to be about subjects where there is a second best. Most of questions seemed like they were just taken from a top five/ten list. A lot of questions also have needless “flavor” text which adds nothing to the question. For example one question in the game I played started with talking about sushi and moved onto asking what was the second most expensive city in the world to live in. That is kind of a stretch as well as a waste of time since the question could have just as easily asked what city was the second most expensive to live in.

2nd Guess’ components are nothing special. The game comes with 220 cards/660 questions which is not bad. The cards are made from pretty typical card stock. The multiple choice markers are made of a pretty thin cardboard and could very easily crease/tear.

The biggest problem with the components is that 2nd Guess didn’t seem to put a lot of care into the questions. In the short time that I played the game, my group discovered a couple grammatical and spelling errors. While the occasional grammar and spelling error is acceptable, I find it alarming that we found several errors in the few cards that we played. Unless we just happened to pick all of the cards with errors, there is likely quite a few more cards that have errors. While this doesn’t break the game, it shows a lack of polish that is disappointing.