In the past we have looked at quite a few party and word games. That is not particularly surprising as both genres are quite popular in the board game industry. Being a fan of party games and word games to a lesser degree, I am always willing to try out new original party word games. When I first saw 25 Words or Less I can’t say that I had high expectations for the game. It honestly looked like another very generic word game. After reading through the rules though I could tell that the game had some interesting ideas that could have made for a good party word game. 25 Words or Less has a good framework for a fun party word game that is unfortunately derailed by overly difficult word cards which ruin what otherwise could have been a pretty good game.

How to Play 25 Words or Less

25 Words or Less! is played in rounds. The round begins with one of the clue-givers taking the top card from the game board. Both clue-givers look at the card and study all of the words. 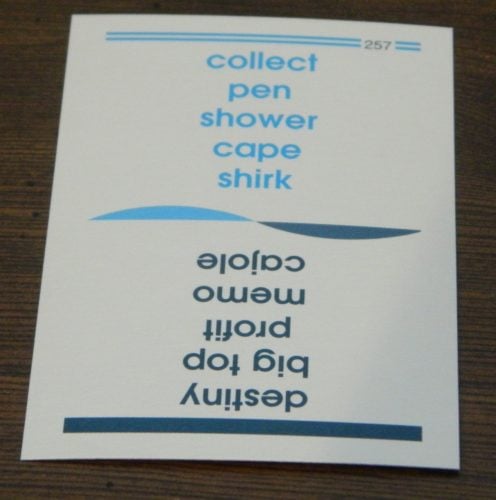 For this round the clue-givers will have to describe to their teammates the words collect, pen, shower, cape and shirk. The two players will bid on how many words they need to successfully describe all five words.

The two clue-givers will then bet on how many words they need to get their teammate(s) to guess all five words. Bids start at 25 words. Whichever clue-giver places the lowest bid will control the card for the round. The other clue-giver will serve as the judge. The sand timer is placed on the number corresponding to the lowest bid. 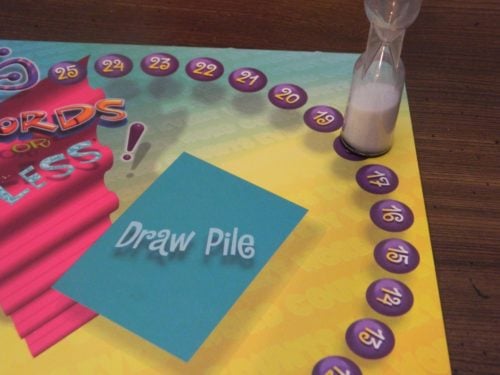 The two clue givers have bid with the lowest bid being for 18 words. The sand timer is placed on the 18 space on the gameboard.

If a player violates one of these rules, they will lose the round.

All of the clue-giver’s teammates can make as many guesses as they want with no punishment for incorrect guesses. The clue-giver can keep giving clues until the timer reaches the zero space or they run out of time. If the clue-giver gives more clues than they bid, their team automatically loses the round.

A round of 25 Words or Less! can end in a couple different ways:

If neither team has ten cards, another round is played. A new clue-giver is chosen for both teams.

The first team to acquire ten cards wins the game.

My Thoughts on 25 Words or Less

When I first saw the box for 25 Words or Less it looked like another generic word game. After playing the game though I noticed it had some interesting ideas. The heart of the game is similar to almost every other party word game. Your goal is to give clues to your partner(s) in order to get them to guess the words on the current card. The catch in 25 Words or Less is that there is a limit on how many clues you can use to describe the words to your teammates. Specifically you have 25 or less words to get the job done.

This limit on the number of clue words that you can use to describe the words actually has a pretty big impact on the game. Instead of judging players based on how well they can describe words, the game tests how efficiently you can describe the words. Players have only a couple clue words to describe each word on the card instead of using whole sentences. At first you might think that it would be hard to adequately describe a word with just a couple words. It turns out that it is not as hard as you would think. You would be surprised by how many words you can describe with only around three words. There are some words that are quite hard to describe in so few words though. This leads to quite a sense of accomplishment when you can get your teammates to guess a word with only one or two clue words.

While the clue giving portion of the game is the main mechanic in 25 Words or Less, I think the bidding mechanic might be just as important. The bidding mechanic determines which team will get to play the round and how many words they will have to describe the words. The player who bid lower gets the opportunity to try and win the card. The bidding is interesting as the players having competing objectives. The player who ultimately gets to play the round wants as many words as possible to make the round easier. The player who ultimately loses the bidding though wants to bid the number of clues down to make it harder on the other player. Balancing these two objectives creates some interesting back and forth between the two clue-givers.

When you combine these two mechanics together, 25 Words or Less has some interesting ideas for a party word game. People who like party word games could have fun with the game as it is easy to pick up and play. The mechanics are simple enough that you can learn them in minutes. The only thing preventing younger children from playing the game is the requirement of having a decent vocabulary in order to take advantage of the limited number of clues. While the game itself is simple, 25 Words or Less can still provide a challenge to people that play a lot of word games. I really liked the concept behind 25 Words or Less and I could see having fun with the game.

The problem is that all of 25 Words or Less’ potential is ruined by the cards themselves. This might vary by the version of the game, but at least for the version of the game that I played (2000 edition) I thought the cards were terrible. What ruins the cards is that some of the words on the cards are way too difficult for this type of word game. I would say almost every set of words has at least one really hard word. The words are either celebrities that some of the players aren’t that familiar with or words that people don’t use often making them hard to describe. These difficult words are a problem because you are limited on how many words you can use for clues. The hard words will either use up most of your allotted clue words and in some cases you wouldn’t get your teammates to guess the word if you had unlimited clues.

These difficult words basically ruin the entire game. What is the point of bidding when neither player thinks they can get all of the words within 25 clue words. The game ends up coming down to who can get the other team to attempt the most cards. As you are unlikely to successfully complete most cards, whichever team passes on more cards will likely win the game. This is not particularly fun concept for a board game.

If you only have access to the newer versions of the game though, I would highly recommend implementing some house rules in order to offset the very difficult words. If neither of the clue givers like the current card and don’t even want to bid 25 words, you should consider drawing a new card. Otherwise the clue-givers can agree on only having to get four or three words. This would allow you to avoid the hard words that make the cards so difficult. This might make the game quite a bit easier but the players can adjust by bidding lower which should offset only having to get four of the words.

On the topic of house rules, I am kind of curious of how 25 Words or Less would play if you eliminated the timer as well. The timer is mostly used in order to force players to make quicker guesses so you can’t guess every single word that goes with every clue that is given. At times the timer rushes players especially when they are trying to come up with clues for the harder words. To offset no longer having a time limit, I could see limiting your teammates to only making one or two guesses per clue given. Instead of having to guess the correct answer quickly, clue-givers would have to give good clues so their teammates would guess the correct word right away. I am not sure how this would work but I think it would be an interesting house rule to try with the game.

As far as the components are concerned they aren’t terrible but they could have been quite a bit better. As I already mentioned, the cards could have used some work as most of them are way too hard. The cards are kind of dull as well. I appreciate that the game includes two rounds on every card but I think the game could have made the cards double sided which would have added quite a few more rounds to the game. There is nothing particularly special about the cards either as you could use cards from any other word game which features five words per card. The gameboard and timer are solid but nothing special. I thought it was kind of clever to move the timer around the gameboard to indicate how many more clues the clue-giver has remaining though. This makes it much easier to keep track of how many clues the player has given and how many they have left to give.

Should You Buy 25 Words or Less?

25 Words or Less is an interesting case of a game that had quite a few things going for it that is ruined by the cards. The concept of bidding for the number of words you can use to describe five words is an interesting idea that has several layers to it. Having to describe words with just a couple words is a good idea as it requires creative use of your clues. 25 Words or Less would never have been a great game but it had the potential to be a solid to good party word game. That is unfortunately all ruined by the cards being way too difficult. Almost every card has at least one word that is going to be very hard to describe in just a couple words which ruins the game’s whole concept. You will basically have to come up with your own house rules in order to get past these issues. Otherwise you will need to pick up one of the older versions of the game as the cards are apparently easier which should fix some of these issues.

I have to say that it was kind of hard to give a final score to 25 Words or Less. The gameplay itself is interesting and should be fun for fans of party word games. There is no way I could overlook the problems with the cards though which pretty much ruin the game. With some of the older versions of the game having easier cards though, I had to factor that in as well. My final rating for 25 Words or Less is a combination of all of these different factors. If you can pick up an older version of the game (pre 2000) and the cards are truly easier, I could easily see adding a half star or even full star to my final rating.

If you would like to buy 25 Words or Less!, you can find it online: Amazon, eBay