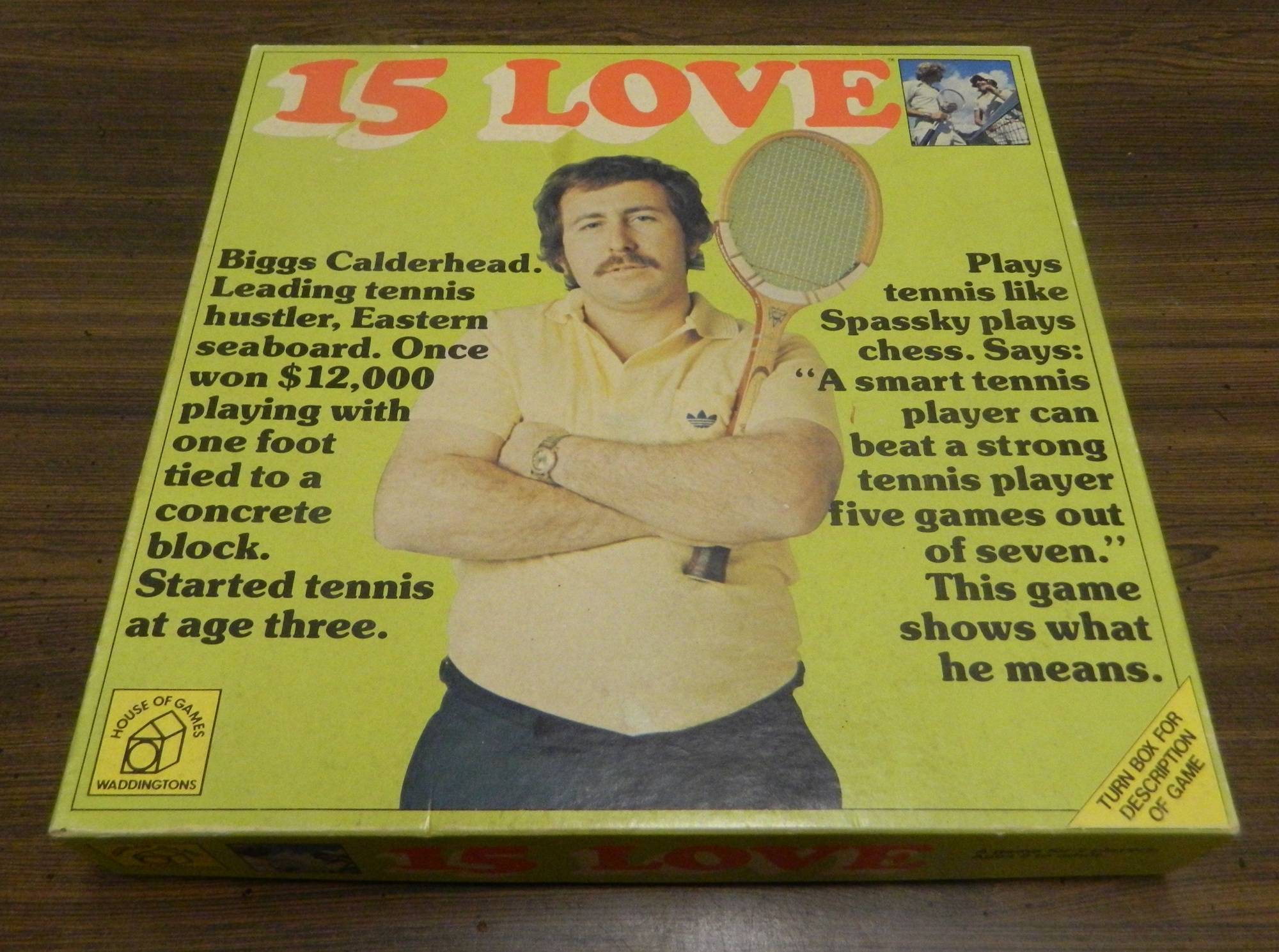 The sport of Tennis has been around for hundreds of years. While not the most popular sport, tennis still has a pretty strong following. As far as tennis is concerned I occasionally play it but I would never watch it. While I knew there were some tennis board games created in the past, I was surprised when I saw how many have actually been made. One of those games was 15 Love created by Waddingtons in 1974. 15 Love succeeds in doing a good job recreating tennis but ends up being a pretty boring experience.

If there are four players each player will choose a team and will control one of the players on that team. With only two players you can choose whether you want to play doubles or if you want to play singles. These rules will be written with doubles in mind. The changes for the singles game will be addressed at the end of the rules. Each team takes one set of the dice. The teams roll their dice with the team rolling higher getting to serve in the first game.

The serving team begins each point by rolling both of their dice. In order to successfully serve the ball the player will have to roll a six, seven or eight as any other number can’t place the ball onto a valid space. If the player rolls one of these numbers they will move the ball the number of spaces rolled. Players can move the ball forward, left diagonally, right diagonally or a combination of all three. The ball needs to be moved into the front court on the opposite side of the board and cannot be hit into the rectangles along the sides of the board. If the ball is successfully served, the player pawn that served the ball can be moved one space in any direction.

If the serving player rolls a five the ball won’t be served but it doesn’t count as a fault. Any roll outside of 5-8 counts as a fault. If a player gets two faults (without successfully serving the ball) they will forfeit the point to the other player.

If the pawns can’t reach the spot of the ball, the serving team scores a point.

When a pawn reaches a ball they can choose to roll one or both dice. The number they roll will determine how many spaces they will move the ball. The ball is moved in the same way as the serve. If the ball lands on one of the spaces on the other side of the board (including the rectangles along the sides of the board), the player has successfully returned the ball. The pawn that hit the ball can then move one space in any direction. The other player then tries to return the ball in the same manner.

The player that is unable to successfully return the ball loses the point. The pawns are then set up for the next serve.

Once a player has won a game the other team serves in the next game. Once a team has won six games they will win the set if they have won by at least two games.

The first player to win two sets wins the game.

Here are the differences in gameplay if you choose to play singles instead of doubles:

My Thoughts on 15 Love

The other option is more of a simulation of tennis. This is the type of tennis game that I would classify 15 Love as. Instead of actually hitting the ball back and forth you are simulating a game of tennis. You roll dice to move players around the court and to hit the ball back and forth. Instead of physically playing the game you try to strategically hit the ball where your opponent(s) can’t reach it to score points.

The problem with a lot of board games that simulate sports is finding the right balance between being loyal to the sport while avoiding getting lost in unnecessary mechanics. This can be a difficult balancing act for a lot of games. You want to make sure that the game isn’t missing any of the mechanics that truly define the sport. If something important is missing it won’t feel like the sport at all. You don’t want to add mechanics that don’t really add anything fun to the actual game though.

One of the most enjoyable things about 15 Love is that it does a really good job balancing these two extremes. The game includes all of the necessary mechanics and yet doesn’t get bogged down with mechanics that don’t really add any fun to the game. This is a good thing because it makes the game quite easy to pick up and play. If you are at all familiar with tennis you can basically jump right into the game. All you will have to learn is how you can move the ball and players which is really straightforward. The game has a recommended age of 8+ but I think children under eight could probably play the game as well.

With the game being so straightforward though the game does end up relying mostly on luck. 15 Love is one of those games where the player who rolls better is going to win the game. While there is some light strategy, your decisions are usually pretty straightforward. Basically you want to hit the ball to the spot that is the farthest away from the other teams pawn(s) since it makes it harder for them to return the ball. Otherwise you probably want to keep your players as close to middle of your side of the court as possible to increase your chances of reaching any ball hit to your side of the court.

The only area of the game that has some strategy is choosing whether to use one or two dice to return the ball. While this mechanic is really simple it actually adds some strategy to the game. There are a lot of times where your decision will be made for you based on the circumstances. The decision can become interesting in some situations though. Rolling one die can be risky as you might not be able to get the ball over the net. If you are successful though you might be able to hit the ball to an area where the other player won’t be able to reach it. You could also choose to roll both dice to try to get the ball into the back of the other player’s side of the court away from their pawns.

While I liked the choice between using one or two dice, I wish 15 Love would have included more mechanics like it. I think 15 Love would have benefited from giving players more options. I think a mechanic that would have allowed players to take safer or riskier shots could have really improved the game. Safer shots would make it easier to get the ball over the net but also make it easier for the other player to return it. Riskier shots would be harder to make but would also be harder to return. To implement this though the game probably would have had to use non-standard dice. By adding a mechanic like this though the game could have had a risk/reward mechanic which would give players more impact on the outcome of the game.

I applaud 15 Love for including rules for both doubles and singles. Both versions of the game play basically the same though with only slight tweaks. So which is better? I wouldn’t say either is significantly better than the other. Doubles seems to make it easier to return the ball which leads to more back and forth. Singles seems to lead to less back and forth as it is easier to hit the ball to an area further away from the other teams pawns. Basically the best option is dependent on what you would prefer. I would not recommend playing with more than two players though since with two players on each team there will be a lot of waiting around for the next time you get to roll the dice.

I give 15 Love quite a bit of credit for creating an accessible tennis game that is pretty authentic to the sport. The biggest problem with the game though is that it feels more like you are watching tennis than playing it. 15 Love is kind of a boring game. Basically you roll the dice to hit the ball. Then the other player rolls dice to try and hit it back to you. This goes back and forth until one player can’t return the ball. As the strategy in the game is usually really obviously it just feels like you are going through the motions playing the game.

This isn’t helped by the fact that 15 Love is not a short game. While you can stop the game at any time, if you play by normal tennis rules the game is going to take at least an hour to complete unless one player dominates. 15 Love is not the type of game that most people are going to want to play for at least an hour. With how repetitive the gameplay is I think most players will get sick of it and want to quit early. I can see diehard tennis fans wanting to complete the game but I see most people quitting after the first set is completed.

Finally I can’t say I love 15 Love’s components. While I appreciate that the pieces and dice are made of wood, they are nothing special to look at. Outside of the gameboard the components look like they could have been taken from any other board game. While this is to be expected from a game from 1974, I think more could have been done with the components. While on the topic of components I have to talk about the box. I honestly think 15 Love has one of the ugliest boxes I have ever seen for a board game. I want to know why anyone thought this choice for the box would help sell the game.

15 Love is an interesting game because it does a lot of things right and yet messes up on the most important thing. 15 Love actually does a pretty good job creating a simulation tennis board game that is still accessible and easy to play. The game does a good job keeping all the major parts of tennis while avoiding getting bogged down by unnecessary mechanics. I like that 15 Love gives players a choice of using one of both dice when returning the ball. I just wish the game gave players more choices as the strategy in the game is pretty obvious most of the time. This forces 15 Love to rely heavily on luck and leads to a somewhat boring game that takes too long to finish.

If you would like to purchase 15 Love you can find it online: Amazon