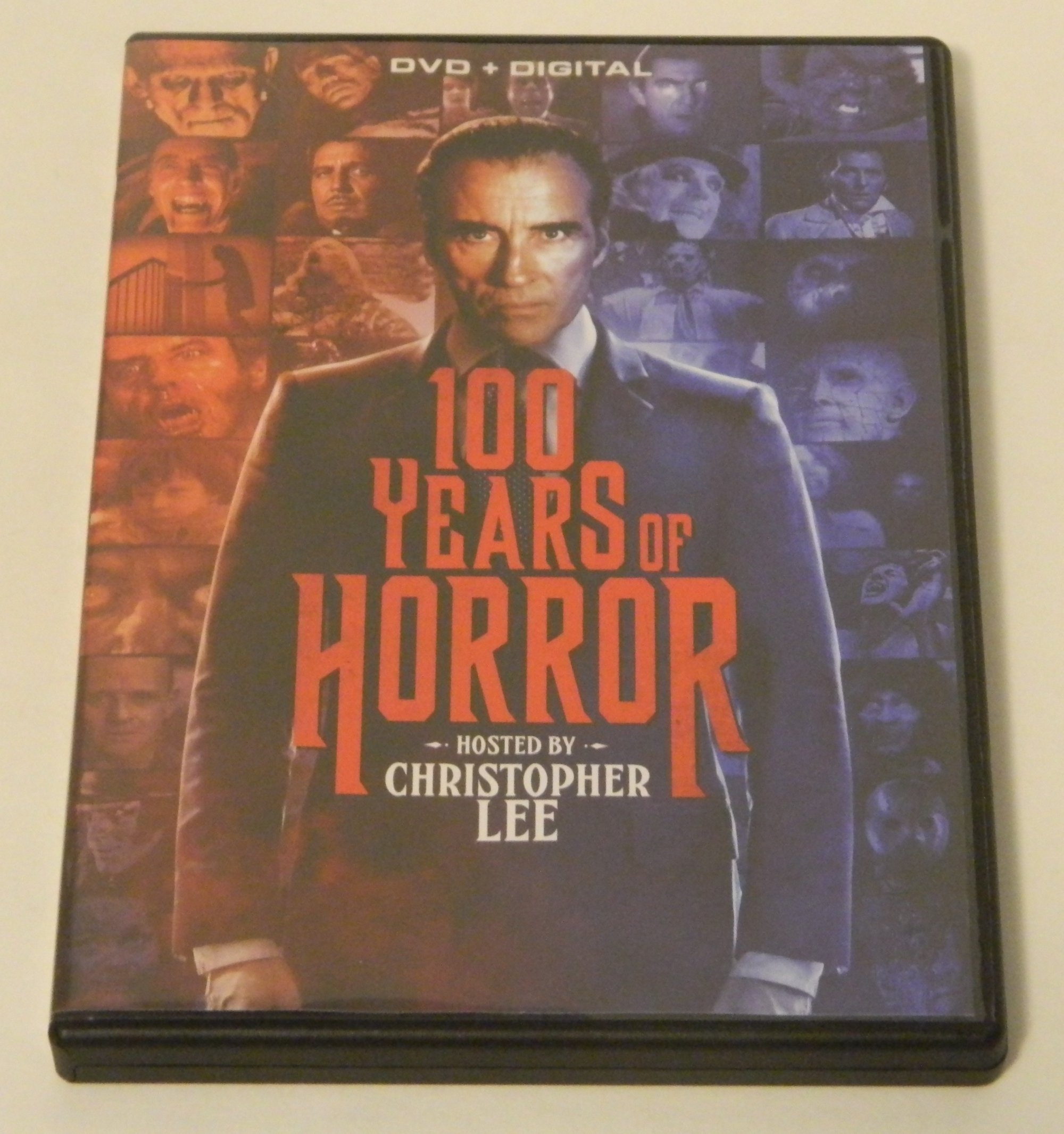 While I wouldn’t exactly call myself a hardcore fan of horror films, I have seen and liked quite a few older classic ones like Frankenstein and Nosferatu. I personally prefer the older, more cheesy style of horror films which are just creepy and atmospheric, rather than the ultra gory and scary ones of today. However, while I have seen some of the classic films featured in this collection, most of them are completely new to me (though a large percentage of them are on my list of movies to watch in the future). I am a big fan of documentaries though, so I had to give 100 Years of Horror a try.

100 Years of Horror is hosted by Hammer Films horror legend Christopher Lee. The series consists of 26 half-hour episodes that first aired in 1996. Each episode features the filmography of a specific monster or theme of some sort. Episode themes include Dracula, other vampires in film, Frankenstein, Bela Lugosi, ghosts, scream queens, and aliens. Episodes are heavy on footage from the films but also include interviews with people like Roger Corman, Hugh Hefner, Bela Lugosi Jr., Michael Carreras (Hammer Films producer), and Christopher Lee himself. The only problem with the formatting of this series is that a large amount of the clips included come from film trailers since they are the only footage in the public domain for these films. While this is a little disappointing, it would have cost a fortune to license footage from hundreds of different classic horror films so it is completely understandable. Early episodes mainly focus on Universal Monsters and Hammer Films but later ones get more into B-movies and lesser known films (but few if any horror films from after the ’70s are included).

Horror films are a niche themselves, but add in that this is a documentary series and you have a rather small niche to appeal to. Luckily, I fit into that niche pretty well. I love documentaries and I do like the occasional cheesy horror film. Overall, I would say that 100 Years of Horror held my interest pretty well. I wouldn’t exactly call it a must-watch but it is solid for those interested in horror history. It especially works well as a primer for viewers looking to get into older horror films since it is sort of a guide for them to see which films they should watch first. Christopher Lee is a pretty great narrator with his deadpan delivery and eagerness to poke fun at some of the bad horror films featured (including a few of his own). There is plenty of interesting archival footage included, like screen tests for Dracula, interviews as old as 1933, outtakes, and even an old Boris Karloff home movie which has the only footage of “Frankenstein” smiling. Each episode goes pretty in-depth with the featured monster but some like Dracula probably could have had even more than 25 minutes of content.

100 Years of Horror has been released on DVD before but the only other version with all the episodes was released way back in 2006 by Passport Video, has been out-of-print for years, and is listed on Amazon for $35 at the time this review was written (compared to the less than $10 this release sells for on Amazon). The video quality isn’t very good (the series was likely a very low-budget production that is now over 20 years old) but I’m guessing it isn’t any worse than the older release (though since I don’t own it I can’t compare the two). However, I really wasn’t expecting the video quality to be very good in the first place since older documentaries like this usually look pretty terrible. No bonus features are included on 100 Years of Horror, but I didn’t really expect any to begin with. For those worried about Mill Creek Entertainment and their use of sleeves, fear not, the three discs in this collection are stacked (which isn’t ideal but still a heck of a lot better option than sleeves). While it isn’t a big deal, I also want to point out that I love the box art for this release. Box art is never going to convince me to buy or skip a title on DVD or Blu-ray, but I’m glad Mill Creek put some effort into it anyway.

As a fan of documentaries and older horror films, 100 Years of Horror made for a pretty interesting watch for me. I know the niche of horror fans who also love history and documentaries is probably pretty narrow but if you fit into it, this is probably worth a watch. The only real problem with the series is that it focuses too heavily on trailer footage (though that is completely understandable because of the staggering licensing fees the production company would have had to pay to license footage from the films themselves). The video quality is also pretty lackluster but there might not even be higher quality versions of the episodes available. While I wouldn’t recommend 100 Years of Horror to people who don’t fit into the old horror/history documentary niche, I would recommend it for those who do.