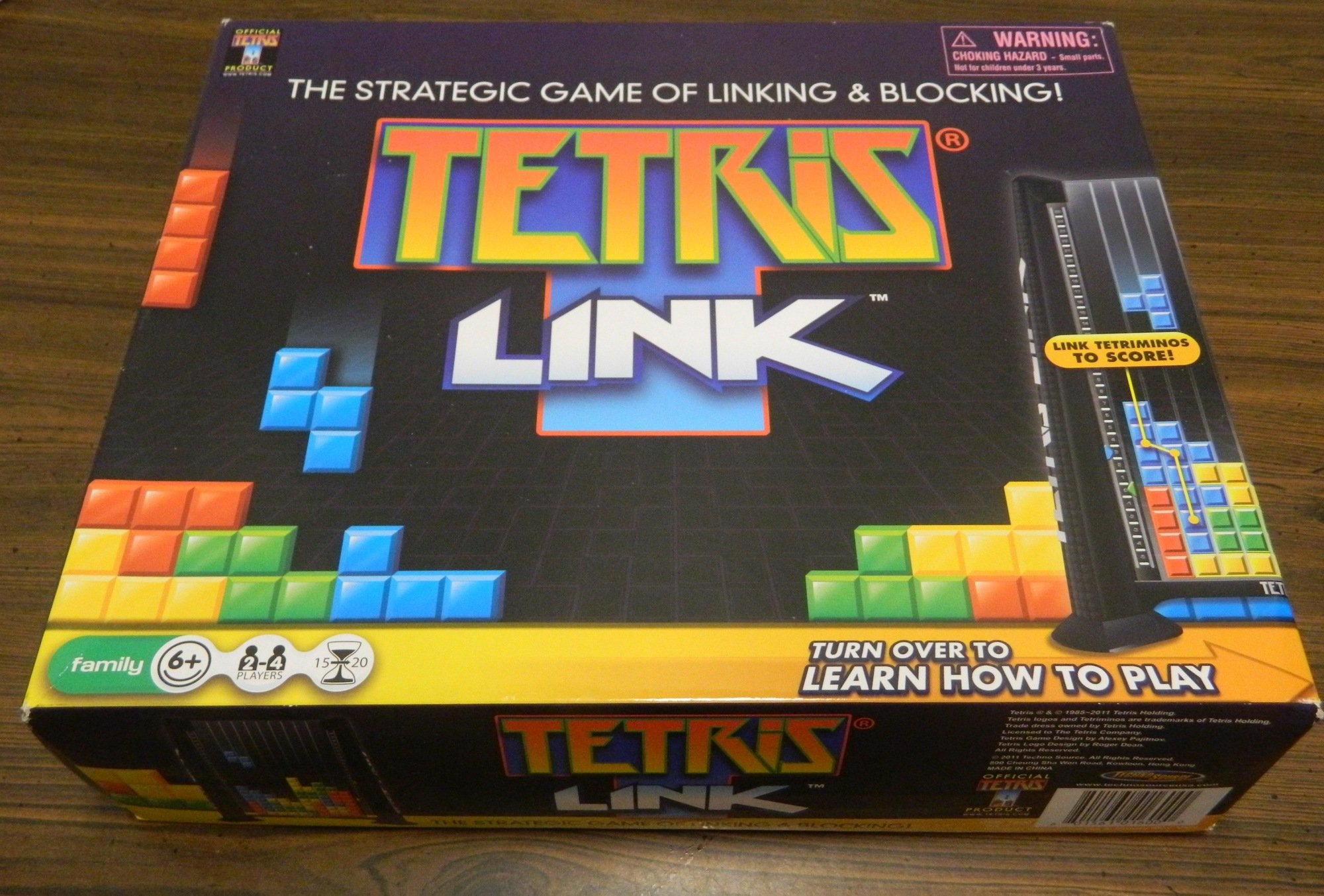 Each player chooses a color and takes all of the pieces of that color. Everyone sets their score on the sides of the gameboard to zero points. Each player rolls the die to determine who plays first. The first player to roll the Tetris Link logo gets to play first.

To begin a player’s turn they roll the die to determine which piece they have to use for that round.

If the player rolls the Tetris Link logo they get to choose which piece they would like to play.

Players drop their piece into the gameboard hoping to connect to their other pieces in the gameboard. In order to score points players need to connect three or more of their pieces together. When a player connects three pieces together they get three points. Every additional piece that is connected to a group of three or more pieces is worth an additional point. Players can play pieces in different areas and eventually combine them in order to score points. The player scores points for all pieces added to a group that weren’t already scored. Points earned are tallied on the score sliders on the side of the gameboard.

Players can loose points when placing pieces. Players lose one point for each empty space under the piece they just played. There is a max of two negative points for each piece played.

Being one of the most popular classic video games of all time, it should come as no surprise that many people have tried to make a board game based on the video game Tetris. At this time there are seven different Tetris board games that have been made. Most of the games aren’t rated particularly high since they usually don’t do a great job recreating the video game. Today I am looking at Tetris Link. Tetris Link takes some liberties with Tetris’ gameplay but is still a solid board game.

The best way to describe Tetris Link is Tetris meets Connect Four. You are essentially playing a game of Connect Four with Tetris pieces. You drop Tetris pieces into a gameboard similar to Connect Four trying to connect your pieces without leaving any empty spaces.

While I haven’t played any of the other Tetris board games, I have strong feeling that Tetris Link is either the best or one of the best Tetris board games. The game does diverge quite a bit from Tetris but I think that was a good idea. I don’t really think you could make a board game that totally recreated Tetris in the first place and I don’t know why you would want to since you could just play the video game which would be much easier.

I had fun with Tetris Link because it is quick and simple. The game only takes 15-20 minutes to play and you don’t have to put a lot of thought into the game. This makes Tetris Link a good filler game when you don’t have a lot of time and don’t want to think too hard. Tetris Link is the type of game that I would bring out every so often to play a game or two.

I would classify Tetris Link as a light to moderate strategy game. How you place your pieces has a huge impact on your success in the game. You need to figure out how to connect your pieces while also messing with the other players. It is usually pretty obvious where you should place your piece on any given turn but if you make a mistake you will really hurt your chances at winning.

I really don’t know what to think about the die determining which piece you have to play every turn. I hate that all the die does is add luck to the game. Players will lose the game because they don’t roll the right shapes at the right times. You have to be smart in how you place your pieces but there are many situations where there is nothing you can do based on your roll of the die. It kind of feels unfair but I really don’t know what else the game could have done.

If players could just choose whichever piece they preferred on their turn, the game would be pretty dull since there would be an obvious piece to play every turn. Since you would always have the optimal piece for a situation, there would be no creativity in figuring out how to use a sub-optimal piece. In three and four player games it would be way to easy to block off the other players by using the perfect piece for the situation. Adding the randomness of the dice forces players to think on their feet and be willing to change their strategy.

Tetris Link tends to stay very competitive. In the game I played all of the players were within a couple points of one another. One player was even able to go from last place to being one point away from winning the game within the last couple of turns. Unless you make a lot of terrible moves or the players end up ganging up on you, all of the players should stay competitive in the game. Even though I like that the game stays close, the one problem is that luck will usually determine who will win the game. Near the end of the game if you roll the wrong shape you could end up losing one or two points knocking you out the game. If you roll well you could get the perfect piece that will give you one or more points.

Tetris Link supports two to four players but I think the ideal number of players would be three. I have only played the game with four players. The problem with four players is that the game is kind of chaotic. There are too many players playing in too small of space. Players are constantly running into each other cutting each other off. This means that it is really easy to gang up on a player and the player that is ignored the most will probably win the game. If you really like a competitive/cutthroat game, I think you will really like the four player version of the game.

At the other end of the spectrum the two player game doesn’t have close to enough confrontation. There is too much space on the gameboard for only two players. Each player could essentially take a side of the board and barely run into one another. I have a feeling it would be hard to cut off another player even if you tried your hardest. This means that a player should be able to connect every single one of their pieces. The player who lost the fewest points will almost always win the game. Since losing points is usually due to the roll of the die, the winner of the game will likely be the player who rolled the best.

The components for Tetris Link are good for the most part. The gameboard is very sturdy and well designed making it easy to figure out where a piece will end up dropping. The Tetris pieces are also quite nice. The game has plenty of Tetris pieces since you won’t even use most of them outside of the two player game. The only real complaint I have with the components is with the die which feels kind of cheap with stickers on the different faces of the die.

Tetris Link is a solid but unspectacular game. While it takes some liberties with Tetris’ gameplay, I think it does so for the betterment of the game. Tetris Link is a fun little filler game that I would play every so often. The game is quick and easy to play and remains competitive to the end. The biggest problem with the game is that is relies too much on luck since the roll of the die will likely determine who ultimately will win the game.

Tetris Link won’t be for everyone. If the game doesn’t look interesting to you, it probably won’t change your mind. If you like games like Tetris or Connect Four though I think you will like Tetris Link. If you can find the game for cheap I think it is worth picking up.