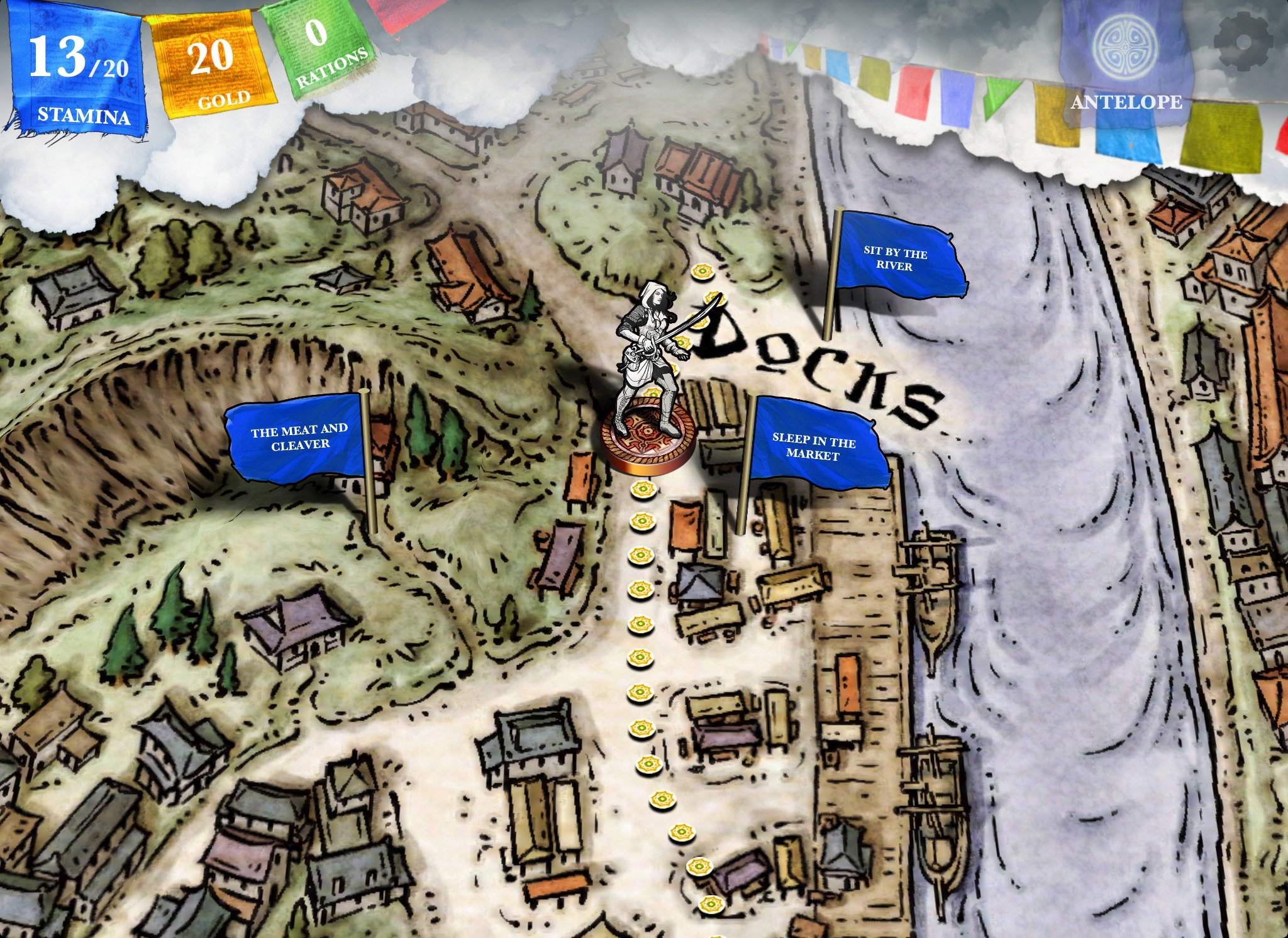 Sorcery! is a four part fantasy adventure where you take control of a male or female hero who is out to save their land Kakhabad from approaching danger. Sorcery! is an interactive story where every decision you make in the game has a direct impact on what will happen to you next.

In part one you begin your journey through the countryside. You will encounter strange creatures, unique characters and interesting decisions as you make your way towards the city of Kharé.

A while back we at Geeky Hobbies reviewed the game 80 Days which was created by Inkle Ltd. About a week ago we received a review copy of inkle Ltd’s newest Steam release Sorcery! Parts One and Two which released today on Steam. While the first three parts of Sorcery! have been on Android and iOS for a while, today I am looking at the Steam release. Having really enjoyed 80 Days I was excited to give Sorcery a chance since I have always been interested in these type of choose your own adventure games. Despite the game not being for everyone, there isn’t a lot to complain about when it comes to Sorcery Parts One and Two and I actually think it is better than 80 Days.

Sorcery plays like a choose your own adventure book a solo tabletop RPG with less die rolling. I remember loving choose your own adventure books when I was a kid. For those of you not familiar with them you would read some of the book and would then be presented with a decision on how you wanted to proceed. Your decision would take you to another part of the book which would continue your adventure. Sorcery plays a lot like that but with more interactivity and a lot less page turning.

Simply put there is a lot of reading in Sorcery! which is why I would say that Sorcery! is not going to be for everyone. The game has an interesting story but it is not an action game. You can take as much time as you want in the game and the game’s length will mostly depend on how fast you read and how fast you can make decisions. I would say around 90% of the gameplay involves reading the story and making your decisions on how you want to proceed. While the game does rely a lot on reading, the game does include various images and some well designed game maps that give you a good picture of the adventure you are partaking in. The game does require quite a bit of imagination though. Fans of tabletop RPGs are probably going to love this aspect of the game. If you hate reading though you probably aren’t going to like Sorcery!

The story is the star of Sorcery! This type of game couldn’t succeed if it didn’t have an interesting story. The story is your typical fantasy adventure story but the game does a good job making it unique. The game has some interesting characters, locales and events that you encounter along your journey. If you like story rich games and like a fantasy setting I can’t see you being disappointed with the story in Sorcery!

Since the game has a branching storyline two players are likely not going to have the same experience in the game. While everyone’s game will have some of the same key elements, the subplots and side quests completed along your journey are likely to change in different playthroughs. While I haven’t explored the alternate paths much in part one, there are a lot of branching paths so I am guessing that the story takes a lot of twists and turns based on the decisions you make. I have played through most of part two though (more on this later) and while the beginning and end seem to be pretty similar, the journey between those two points can vary significantly.

One thing I give the game a lot of credit for is including the rewind feature. If you change your mind and want to change one of your decisions you can rewind back to any part of the game that you want. This is very reminiscent of the old choose your own adventure books where you could just go back to a previous page if you didn’t like the outcome of the decision you made. This option takes a lot of stress out of making decisions in the game because if you don’t like the outcome of your decision you can just choose the other option. This is especially key since you will encounter situations where your character will die in unexpected ways. When you hit one of these points in the story you can just rewind and avoid the death. Some players may find this cheating but I think it is a good idea since it gives players more options.

Other than the reading and the choice making, the game features three other mechanics.

Early on I felt the combat was a little slow. The more you play the game though the combat starts to grow on you. It is not the strength of the game but it does a pretty good job working with the story telling aspects of the game. For the most part the combat involves trying to guess what the computer is going to do. Sometimes the game gives you an indication in the text presented but other times you need to just guess what you think the computer is going to do. The good thing is that the game lets you re-fight any battle which is a good thing if you really struggled in a battle that you shouldn’t have struggled with.

The second main mechanic outside of the story is the idea of using magic. Magic can be used to help out at the beginning of a battle or can be used to help solve some of the puzzles and decisions you are presented with throughout the story. Each spell uses some of your health/stamina and some spells require using special objects that you acquire on your journey. Spells are is cast by using a three letter incantation. Most of these are pretty easy to remember but I kind of wish there was a way to reference your spellbook while casting spells so you didn’t have to keep going back to the spellbook and then return to casting your spell if you can’t remember one of the spells.

The final main mechanic outside the reading/decision making is the game Swiddlestones. Swiddlestones is a dice game that is introduced in part two which is a way to get money and information out of the characters you meet in the city. Swiddlestones is essentially the game of Liar’s Dice that uses four sided dice instead of six sided dice. Basically you bet against the computer on how many of each number were rolled between the two players. Swiddlestones is a pretty good distraction but gets boring after a while. Once you get a hang of how to play the game it is really easy trick the computer and win which makes it a great way to make a bunch of money in the game.

So today the first and second part of Sorcery! were released on Steam. The third part is supposed to be released soon with the final part being released later this year. Being an episodic game it shouldn’t come as a surprise that the game doesn’t have a real ending at the end of part two since the story is meant to be continued in parts three and four. While this is kind of frustrating having to wait for the next part of the game, if you are interested you can play the third part of the game on iOS or Android. I know I am anticipating the other parts of the game being released.

It probably took me around two to three hours to complete part one of the game. For part one I took my time and explored but I just took one path through until I reached the end. I haven’t tried alternate paths yet so this is going to add time to part one. I spent a lot more time with part two mostly because I wanted to get the “good” ending. Unless you are very observant or do a great job guessing which paths to take, you are likely going to spend quite a bit of time finding all the stuff you need to get the “good” ending. The game thankfully has a mechanic that lets you go back and get the clues that you miss without having to restart the entire part over again. In order to find all of the clues needed for the “good” ending I ended up exploring pretty much the entire map which took around six to seven hours.

If you speed run through the game you might not get a lot of play time out of the game especially if you don’t go back and try the other paths. If you take your time though you should be able to get quite a bit of play time out of the first two parts of Sorcery! The first two parts of Sorcery retail for $9.99 on Steam with the game being on sale for $5.99 for the next week. If the game interests you and you take your time in the game I think you should get your money’s worth out of the game.

Should You Purchase Sorcery Parts One and Two?

Does the idea behind an interactive choose your own adventure/solo role playing game sound interesting? Did you enjoy inkle Ltd’s 80 Days? If you answered yes to either or both questions I think you will love Sorcery Parts One and Two. Sorcery Parts One and Two are great games if you are into games that mostly focus on their stories. If you already have the game on mobile though I don’t think the Steam version of the game is much different so unless you want the game on PC as well as mobile there probably isn’t a reason to purchase the game on Steam as well.

If the idea of interactive choose your own adventure doesn’t really appeal to you, Sorcery Parts One and Two are not going to be for you. The game is good because of its’ story so if you don’t really care about a game’s story it probably won’t appeal to you. Sorcery is not an action packed game and it relies a lot on reading text and using your own imagination. If this doesn’t sound right for you, Sorcery probably won’t be for you.