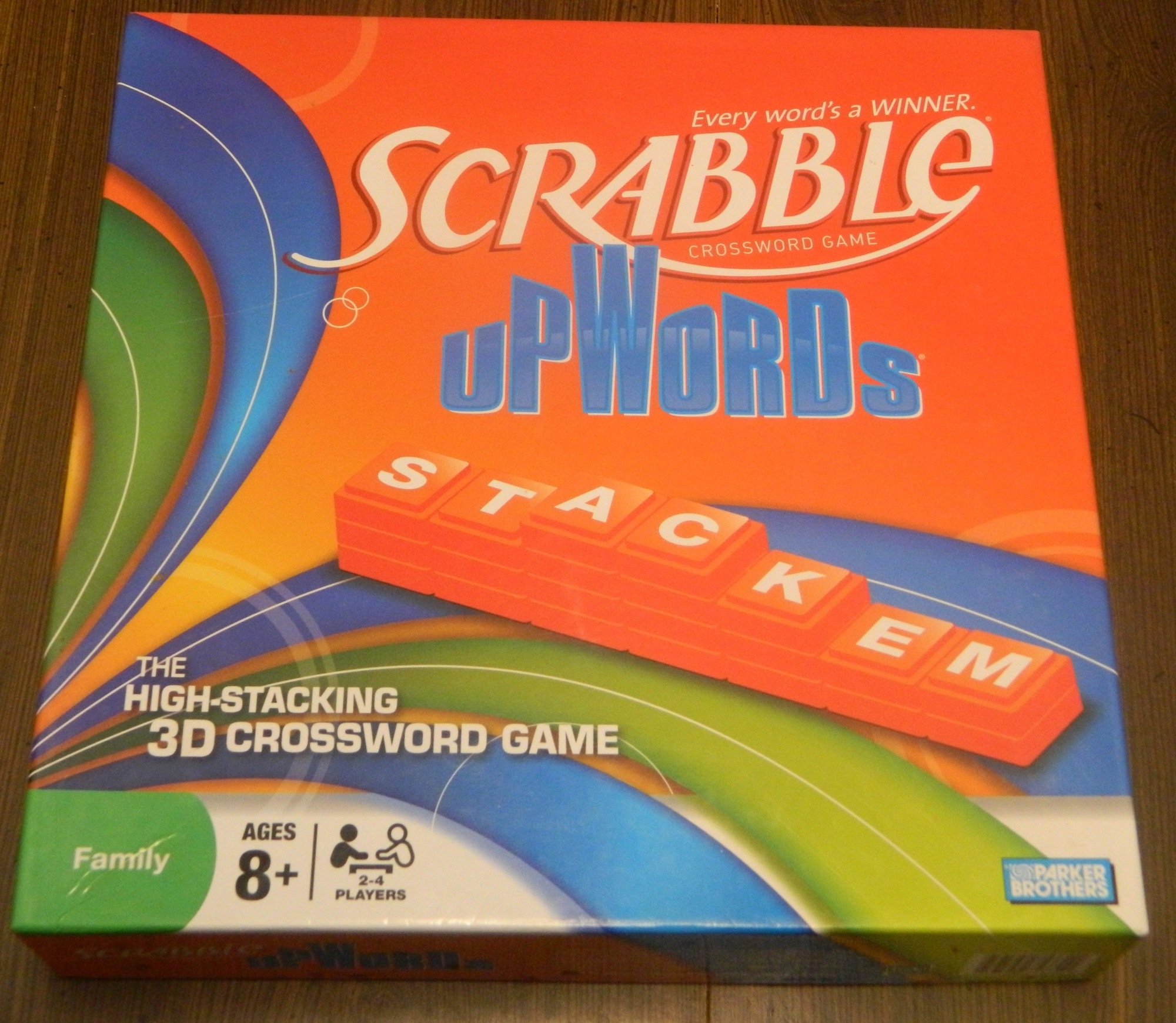 The game begins with every player drawing a tile at random. Whoever draws the tile closest to A gets to play first. Each player then draws seven tiles for their hand.

On a players’ turn they play as many tiles as they would like to either add a word to the board or alter a word already played to the board. The first player must play their first word so at least one tile is in one of the four center spaces. Except for the first player, all other tiles played must be connected to one of the words already played to the gameboard. Tiles can only be played in one horizontal or vertical line (not diagonally).  Words played must be from left to right or downward.

In order to alter words, tiles can be played on top of one another. A stack of letter tiles may not be higher than five tiles high though. You cannot stack the exact letter on top of itself (you can’t play an “A” tile on an “A”tile). When changing a word, you must keep at least one of the original letters. If the letters you add to the board alter words already played to the board, the resulting words must all be legal words.

The following words can’t be played.

If a player thinks a word that was played is misspelled, is not actually a word, or is an illegal word; a player is allowed to look it up in the dictionary. If it is determined to not be a correct word, it is removed from the board and the player who played the word is allowed another opportunity to play a word.

If a player either can’t play a word or doesn’t want to, they can either skip their turn or they can exchange one of their tiles for a random tile. If a player chooses to exchange a tile, they lose their turn.

After each word that is played, tiles are scored. A player collects points for every word they added and/or altered during their turn. Points are scored as follows:

Before the next player starts their turn, the current player draws enough tiles so they have a total of seven tiles. If the draw pile runs out of tiles, players no longer have to draw tiles at the end of their turn. Play proceeds with each player adding words to the gameboard. The game ends if one of the following occur.

Once the game ends, each player loses five points for every tile that they still have on their rack. After penalties are accessed, whoever has the most points is the winner.

Scrabble Upwords or Upwords (as it was originally called) was a game created back in 1981. Over the years it has had quite a few different iterations with slight differences made to the game over the years. The copy that I played was the 2008 Scrabble edition. It appears that the only main difference between my version and the original is that my version has a 10X10 board while the original game had an 8X8 board. I am glad that I played on the 10X10 board since I thought that was a even a little too small.

As I have mentioned in other reviews, I am not a huge fan of words games. I don’t hate them but they aren’t my favorite genre either. I had never played Upwords before so I didn’t know what to expect. The game obviously must have fans or there wouldn’t be so many versions of the game. Its’ current Board Game Geek rating is not particularly encouraging though. After having played the game I wouldn’t call Scrabble Upwords great but it isn’t bad either.

Recently I reviewed the game Nab-It. Looking at the basic rules, both games are very similar. Nab-It is really a re-imagining of Upwords since Upwords is quite a bit older. You play tiles in order to build words. In both games you are able to stack tiles in order to form new words. My biggest complaint with Nab-It was that I did not like the scoring system in the game. Nab-It rewarded players too much for stealing other players’ words instead of building your own words. Building words on the bottom layer was also not encouraged since you rarely score points for them.

What I really liked about Scrabble Upwords is that it fixes this problem. Unlike Nab-It, it is actually better to build your own words on the bottom row since you get two points per tile instead of one. Every tile you play is more valuable on the lowest level. Later in the game you really don’t have much of a choice though since most of the lowest level has already been taken. You then need to adjust your strategy and start altering words in order to take advantage of large stacks which can get you a lot of points.

I had fun playing the game but the game does have some problems.

As it turns out the penalty didn’t have an impact on the game I played. The player who got rid of all of their tiles was in first place so the penalty didn’t change the ultimate winner. Before the penalty points were applied though the game was very close. I believe all of the players were within around 10 points. With the game being that close, I can imagine the penalty at the end of the game having an affect on the final winner a lot more than it should.

Like most tile based game, the luck of the draw will be a determining factor in who ultimately wins the game. If you draw good tiles you have a better chance at winning than someone who draws bad tiles. At one point in the game I played one player only had consonants while another player only had vowels. It is pretty hard to make long words in either situation. In normal Scrabble this is somewhat offset by the fact that harder to use letters are worth more points. In Scrabble Upwords this is not the case since every letter is worth the same number of points. I don’t think an “E” and “Z” should be worth the same number of points.  I am guessing that the game did this to make the game easier to score, but the game should have had a small bonus if you played one the harder letter tiles.The components of Scrabble Upwords are pretty good. I wish the letters were engraved so they would last even if the paint chipped off but otherwise the tiles and gameboard are made of solid plastic. One thing I really appreciate is that the gameboard/box is more compact than other versions of Upwords. The original versions of Upwords are quite large with a big box to go with it. The Scrabble Upwords box is actually quite small which is nice for people who already have quite a few board games.The tradeoff though is that the gameboard and tiles are smaller which might make them a little harder to read for people with poor eyesight.

Overall I had fun playing Scrabble Upwords. It is probably one of the better word games I have played. The game has a good balance between utilizing your vocabulary while also playing tiles strategically. The penalty at the end of the game and the reliance on luck when pulling tiles stops the game from being great though. I would still consider it to be an above average word game.