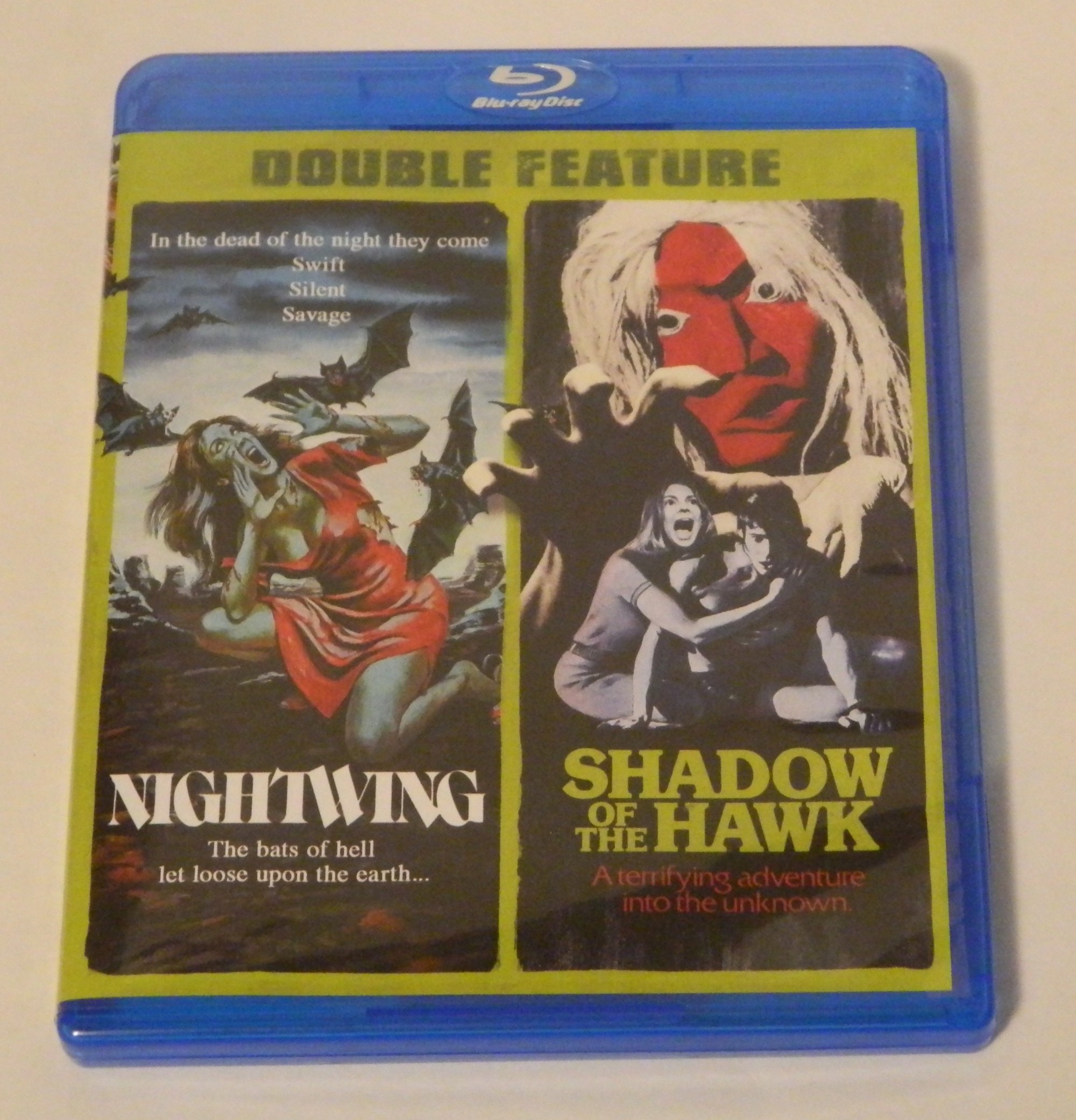 If you have never heard of either of these these two films, I certainly can’t blame you. I definitely hadn’t heard of either Nightwing or Shadow of the Hawk but I decided to give them a chance because I enjoy watching completely forgotten movies to look for hidden gems (just like we do on this blog for older board games as well). Usually movies like these have been forgotten for a reason but I occasionally will find a nice hidden gem and if worst comes to worst, they will usually provide some funny B-movie material to riff on. After watching both of these films, it’s pretty clear there is a reason they were forgotten over the years. While both have a few funny moments, I would say they unfortunately fit into the undesirable category of being not quite bad enough to be B-movies but also not good enough to be worth recommending.

I’ll start off with Shadow of the Hawk (the slightly better movie of the two), a 1976 “horror” film about a Native American Shaman attempting to bring back his westernized grandson to his reservation to become the new Medicine Man of the tribe. Along the way, the two (and a reporter who tags along for no real reason) battle an evil spirit and a black car that is always on their tail.

Unfortunately, most of Shadow of the Hawk is pretty dull with uninteresting characters doing uninteresting things. The main character Mike (played by long-time actor Jan-Michael Vincent) is especially dull to the point where the actor seemed like he either didn’t want to be there or just didn’t have any charisma at all (even though this wasn’t one of his earlier roles). This casting was a bit strange to begin with, as he doesn’t exactly pass as part-Native American. The rest of the cast is fine but they don’t really have anything interesting to do.

The best parts of the film are easily the scenes with the black car and other times where the characters are fighting off the evil spirit. When things are actually happening, the film can be pretty fun. From the occasionally creepy car scenes to an unintentionally hilarious fight with a “bear” (who at times is obviously an actor in a bear suit), there’s plenty to laugh at in these scenes. Honestly, the bear scene might be one of the funniest things I’ve seen in a B-movie thus far (too bad it’s so short). It’s so ridiculous and random and exactly the type of thing that makes me laugh out loud. I also had fun mocking the magical song that is played anytime a hawk appears (even though they never do anything) and the old Shaman occasionally has some funny lines like “That car is evil!” Unfortunately, anytime the spirit is off-screen and the main characters are just talking, the film pretty much turns into snoozeville. Since low-budget films like this have to spread out those scenes to save money, unsurprisingly there are far more boring scenes than good ones.

If Shadow of the Hawk could have cut down on some of the filler, there definitely would have been a fun B-movie here. However, it is at least 20 minutes too long (and it’s only a 92-minute film to begin with) and these boring scenes drag so long that it brings the rest of the film down. Some of these filler scenes should have been cut so we could get to know more about the enemy. Heck, I’m not even 100% sure what it was supposed to be (whether it was supposed to be a witch, wendigo, ghost, or some other creature). One other thing I need to touch on, despite being labeled a “horror” film and there being a few slightly creepy scenes, I wouldn’t really consider this a horror film. I’d say the adventure film genre fits the movie a bit better.

I was mostly interested in Shadow of the Hawk but I also decided to watch Nightwing even though it has an awful IMDB rating (4.7/10 as of the time this was posted). This one is another Native American-themed “horror” film, this time about vampire bats terrorizing an Indian reservation in New Mexico.

The second half of Nightwing is actually more consistently funny than Shadow of the Hawk. The only problem is the film’s first half is even more dull than the most boring scenes in Shadow of the Hawk. It feels like literally nothing happened the first 45 minutes. A bat doesn’t even make an appearance on camera until the 46th minute of the film. If you can get past those 45 boring minutes (I really struggled to do so), the end is actually pretty funny. The bats are oftentimes hilarious to mock. Sometimes they are literally black dots, other times they appear to be stuffed animals but they are almost always laughably bad. These “effects” are hilariously bad most of the time and something you can definitely mock in a riffing setting.

Similar to Shadow of the Hawk, Nightwing‘s main character is also painfully dull. What makes it even worse is that this film actually has an interesting and funny character on the sideline that should have been the main character. That character is Van Helsing-like Phillip Payne (played by David Warner). Almost every scene this character appears in is instantly made more interesting by his presence. This guy hates vampire bats more than Republicans hate Democrats (and vice versa). More than Yankees fans hate the Red Sox. He hates these “freak” vampire bats so much, it’s hilarious. If Nightwing was just Phillip Payne hunting down vampire bats all movie, it would have made for a very fun B-movie. Instead, we get a dull film with a few flashes of B-movie greatness mixed in.

Both Nightwing and Shadow of the Hawk are being released on Blu-ray for the first time. In fact, both only got one DVD release in America and those releases are currently selling for double the Amazon price of this release (and this is a Blu-ray). Unfortunately, neither film looks particularly great on Blu-ray. I wasn’t expecting crystal clear video quality for these two forgotten films but there is plenty of pixelization/noise on both. Of course they both look better than DVD but it isn’t a huge upgrade. However, considering the age of these films and the value price point the release is being sold for, I’m satisfied in this area. No bonus features are included but I wasn’t really expecting any to begin with.

Overall, while both films have their moments (especially the glorious bear scene from Shadow of the Hawk), there are far more scenes that will bore you out of your minds. Unfortunately, I would say both Nightwing and Shadow of the Hawk fit into the middle-of-the-road category. Outside of a few funny scenes, there isn’t really enough to riff on to make them fun B-movies. On the other hand, they aren’t interesting enough to be good films to watch either. Unless you are really running out of B-movies to riff on (or you love films featuring Native American characters), I would probably just pass on these films. However, if you are somehow interested in either film this release is a much better value than the previous releases of these films. You get two films on Blu-ray for half the price of one of the DVDs.

Nightwing/Shadow of the Hawk Double Feature was released on Blu-ray on October 23, 2018.

Buy Nightwing/Shadow of the Hawk Double Feature on Amazon: Blu-ray

Amazon: Buy Nightwing/Shadow of the Hawk Double Feature on Amazon