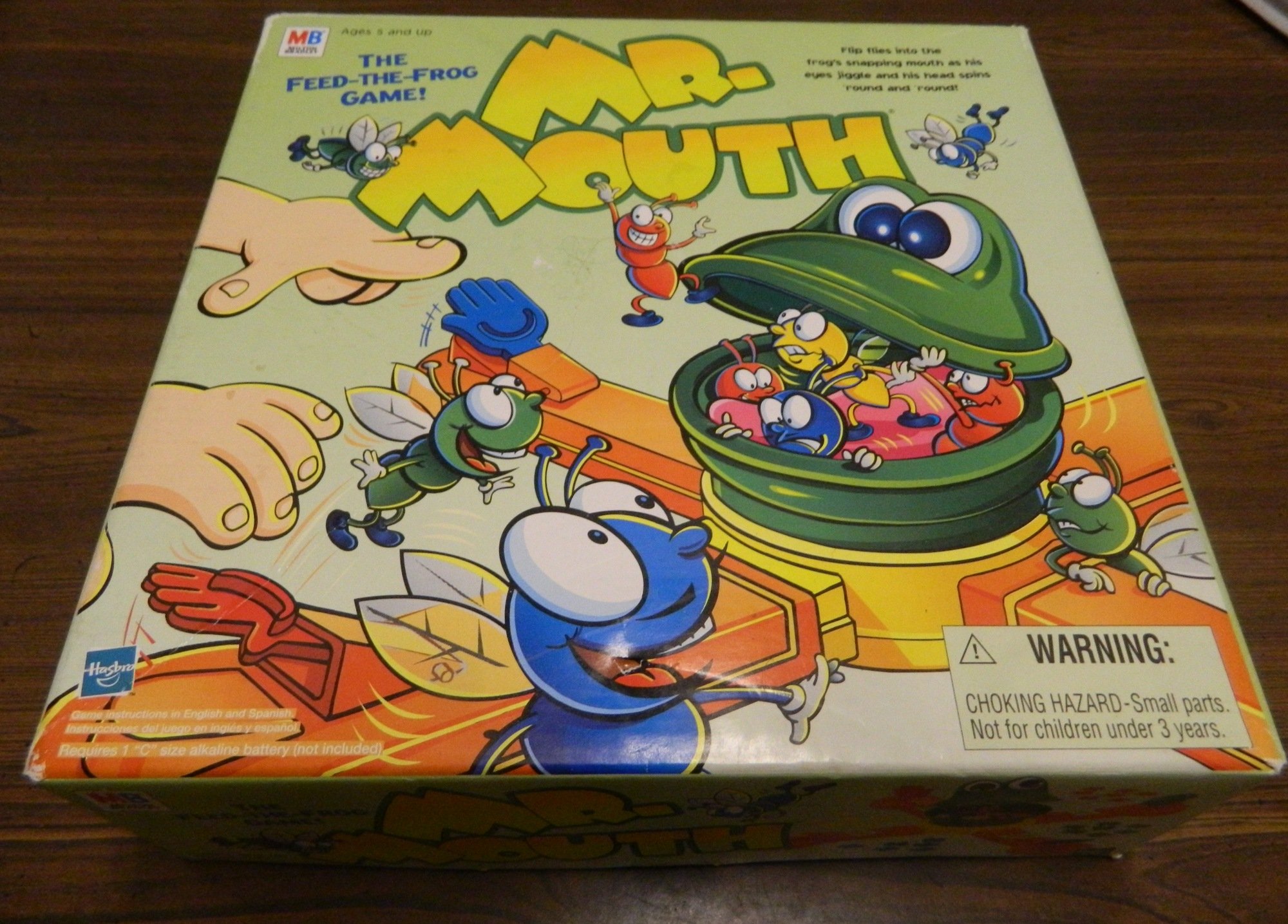 One of the board games I remember most from when I was a child was Mr. Mouth. I can remember playing Mr. Mouth all of the time. Not having played the game for quite a few years though, I was wondering how well it would hold up since games from my childhood don’t have a great track record. While Mr. Mouth is a little too simplistic and can get boring kind of quickly, for a children’s dexterity game Mr. Mouth can still be quite a bit of fun for adults.

Each player chooses a color and takes all ten flies and the flipper of the corresponding color. Players connect their flipper to the base. When everyone is ready, Mr. Mouth is turned on and the game begins.

When Mr. Mouth is facing you, your goal is to shoot your flies into its’ mouth so they stay inside. Players may only shoot one fly at a time. The first player to get all ten of their flies into Mr. Mouth’s mouth wins the game.

Mr. Mouth is such a simplistic game that I don’t know if the game even needs an explanation before playing. Put your flies on your launcher and shoot them into the frog’s mouth. That is all there is to the game. Whoever gets all of their flies into the frog’s mouth first wins. The game is so simple that outside of the possible choking hazard of the flies, there is no reason that children under five wouldn’t be able to play the game.

With a game that is so simplistic you would think that it would be pretty boring for adults. That is not the case though since Mr. Mouth is one of those games that despite being made for young children can also be enjoyed by adults. I know that I loved the game when I was a kid and I still enjoyed the game now. While it is not going to be for everyone, there is just something satisfying about trying to shoot flies into the frog’s mouth.

I think the reason the game can be satisfying for all ages is that the game is quite adaptable for different ages. If you are playing with younger children you could give them less flies making it easier for them without having to purposely lose. For adults they can try to make multiple shots each rotation. A player will usually only be able to make two or three shots each rotation. In a game with just adults and older children, the game could get pretty competitive especially if the players are really good at making multiple shots per rotation.

One problem with Mr. Mouth is that with the game being so straightforward it is the type of game that is pretty easy to master. If you play the game for too long you will be able to know exactly how much energy to put into each shot making it really easy to win the game. After a couple games most players can sink many flies in a row without missing. This leads to the game becoming kind of dull. This is why Mr. Mouth is the type of game that you play for 10-20 minutes and then put away for a different day. I don’t see adults having a lot of fun with the game if they play it for an extended period of time.

The biggest problem with Mr. Mouth is the same problem that all of these “launching” games have. Whenever you miss, flies go all over the place. This leads players to picking up flies off the ground, getting in other player’s ways, or making other players waste their time picking up your flies. This is a big distraction that takes away from the game but there is really no way to prevent it in a game like Mr. Mouth. I can only think of two different ways to minimize this problem. Players can spend their time when Mr. Mouth is not facing them to return flies to the other players. The other option is to stop Mr. Mouth and pause the game to retrieve all of the flies when one player has no flies left in front of them. My group decided to go with the second option which seemed to work pretty well.

Mr. Mouth is far from a perfect game but it is an enjoyable game. Sometimes it is nice to just play an easy dexterity game where you don’t have to put a lot of thought into what you are doing. Mr. Mouth is an accessible game that can be enjoyed by children and adults. There is just something satisfying about launching the flies into Mr. Mouth’s mouth. The game is simplistic though which makes it pretty easy to master and thus a game that you aren’t going to want to play for an extended amount of time. The game also has a problem with retrieving all of the flies that fly all over the room.

If you would like to purchase Mr. Mouth you can purchase it on Amazon. Mr. Mouth (1976)