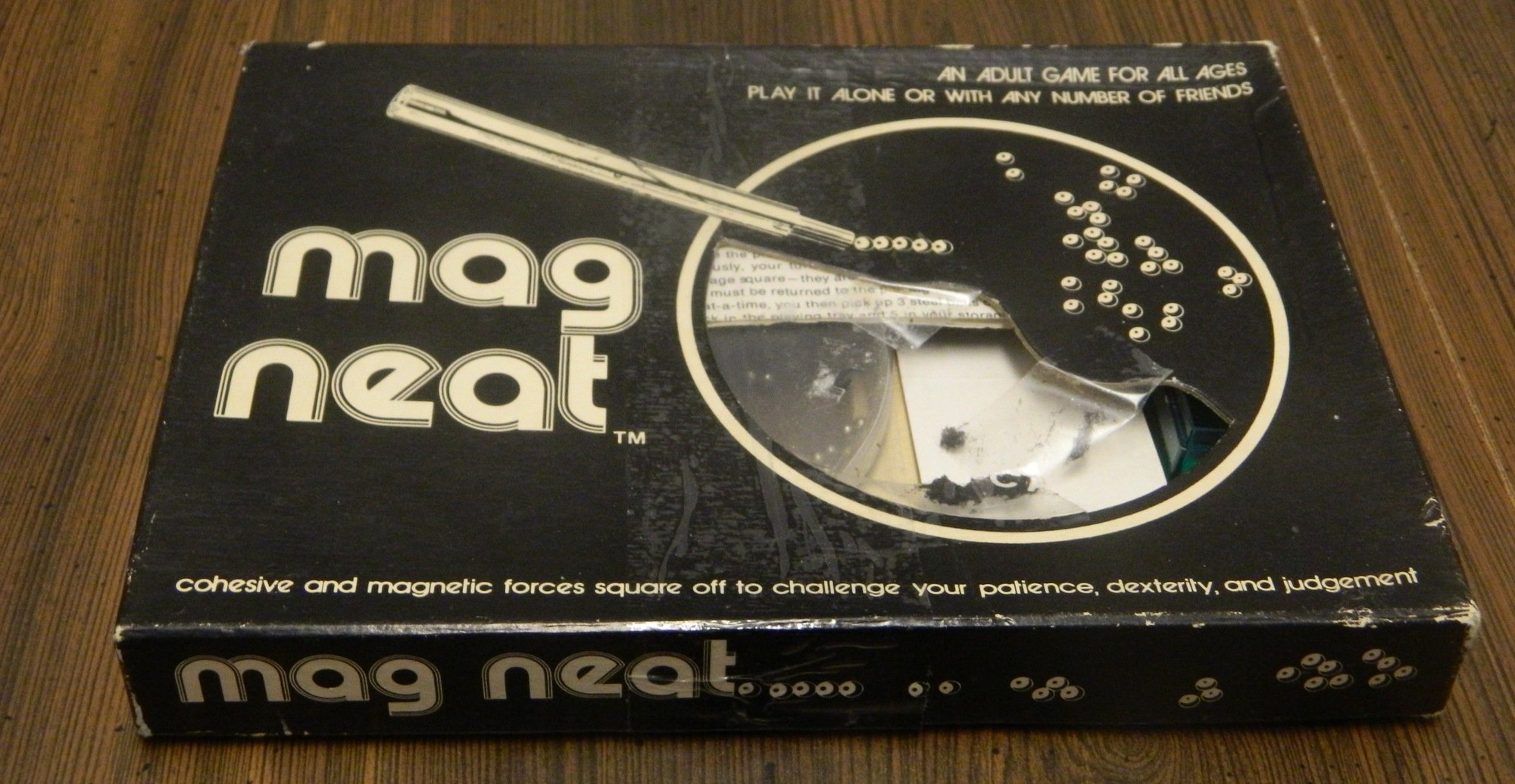 To begin place all of the steel balls in the lid of the plastic round container. Each player also takes a storage square.

To begin each players’ turn, shake the tray to spread out the steel balls. The object of the game is to pick up one steel ball at a time with the magnet. The player gets to keep every steel ball that they successfully pick up one at a time. The balls stay on the magnet until the end of the players’ turn. The player continues to take balls until they end up picking up two or more balls at the same time. When this happens the players’ turn ends. The player takes all of the balls that they were successfully able to take one at a time and adds them to their storage square. If a ball falls from the magnet, the player loses their turn. Play then passes to the next player. Players continue taking turns until all of the balls have been claimed by one of the players. Players then count up their balls to see who is the winner. The big bonus ball is worth ten points while the other balls are worth one point each. Whoever has the most points wins the game.

The game can also be played with the following rule variations to make the game more challenging:

There have been quite a few dexterity games made over the years. While there are quite a few different dexterity gameplay mechanics, there is not a whole lot of variety in each type of gameplay. When I found Mag Neat at a thrift store I wasn’t expecting much from it. It seemed a lot like Pick Up Sticks or Jack Straws. Since it only cost about $0.25 I decided to give it a shot. While not fantastic, I was actually a little surprised by how much I enjoyed Mag Neat.

In general I don’t mind the occasional dexterity game but it is also not my favorite genre of games. Before playing Mag Neat I really thought it was going to be just another very average dexterity game. The concept appeared somewhat original due to using a magnet to grab the balls but I thought the game would be really hard so I wasn’t expecting a lot.

When you first play the game it does seem quite hard. For the first turn or two no one was particularly good at the game since everyone had to adjust to the strength of the magnet and how close they could get the magnet to the balls without picking them up. After some adjusting, the game settled into a very manageable difficulty level. If you are terrible at dexterity games you won’t be good at Mag Neat but if you are at least average at dexterity games you should be fine.

While I think the game’s difficulty is about right, I think the game should have added a risk/reward element to the game. Without adding house rules you are essentially taking no risks in the game. The only way to lose balls that you have already gathered is to have some of them fall off the magnet (this only happened once during the game I played.) Otherwise you really don’t take any risks since you can’t lose balls you have already acquired. By making a risky move the only thing you are risking is ending your turn early. I would maybe consider adding a rule where if you end up grabbing more than one ball at a time, you are forced to put back all of the balls you acquired that turn. This would have forced players to decide if they wanted to press their luck to try and grab additional balls or if they just wanted to play it safe and keep the balls they had already acquired.

What surprised me most about Mag Neat is that it is a lot more fun to play than I was expecting. For some reason it is satisfying to pick up the little steel balls. The game is most entertaining when all of the “free” balls are gone and you need to start using the magnet to try and separate some of the balls that have clumped together. To separate the balls you need to wave the wand over the balls trying to attract them just enough that they start moving. You need to be very careful while you swing the magnet over the balls to avoid picking any of them up. Once you successfully separate one of the balls you need to frantically pick it up as it rolls across the dish to prevent it from clumping up with another group of balls. Several times during the game we ended up pleading with the balls to stay away from the other balls.

Another thing I liked about the game is that it is easy to play and get into. I would say it probably takes at max a minute or two to explain the game to a new player. You could then quickly jump into the game and start playing. New players won’t be as good as more experienced players right away but they should catch up pretty quickly.

While the game is better than expected, it does have some issues.

Another issue with the game is its’ reliance on luck. The gameplay actually requires quite a bit of skill but luck is also important due to how the balls are situated at the beginning of your turn. If you are lucky you will get a lot of balls that are separated from one another. In this situation it is easy to grab a lot of balls and score a lot of points without needing a lot of skill. If you are unlucky and all of the balls clump together though it is much harder to pick up balls. This situation requires a lot of skill to coax the balls away from one another.

Another thing I didn’t like about the game was the fact that the bonus ball is worth way too many points. Getting ten bonus points is a huge advantage for a player. At max you will probably be able to grab ten balls during a turn. Grabbing the bonus ball is like getting at least one free turn. Since the bonus ball is a little harder to grab due to its’ larger size I do think there should be a bonus. I think a more reasonable bonus though would have been five points.

A small complaint I have with the game is the rule that all of the balls you have collected during a round have to stay on the magnet until your turn is over. I like that it makes the game harder and more interesting. The problem is that it becomes hard to determine if a player ended up picking up more than one ball at a time when there are already a lot of balls on the magnet. If the balls were immediately removed from the magnet, it would have been very easy to see if the player ended up picking up two balls at the same time.

Finally the components serve their purpose but are nothing special to look at. The game looks like it was made on a budget. The magnet works well though. The steel balls are kind of small though and could be lost quite easily.

I didn’t expect much going into Mag Neat. Mag Neat isn’t a revolutionary or original dexterity game but it is surprisingly fun. The game is simple to learn and play. If you don’t like dexterity games it won’t change your mind. If you like dexterity games though and would like to try something new, you may want to give Mag Neat a chance. The game does appear to be uncommon/rare though so it may be hard to find.