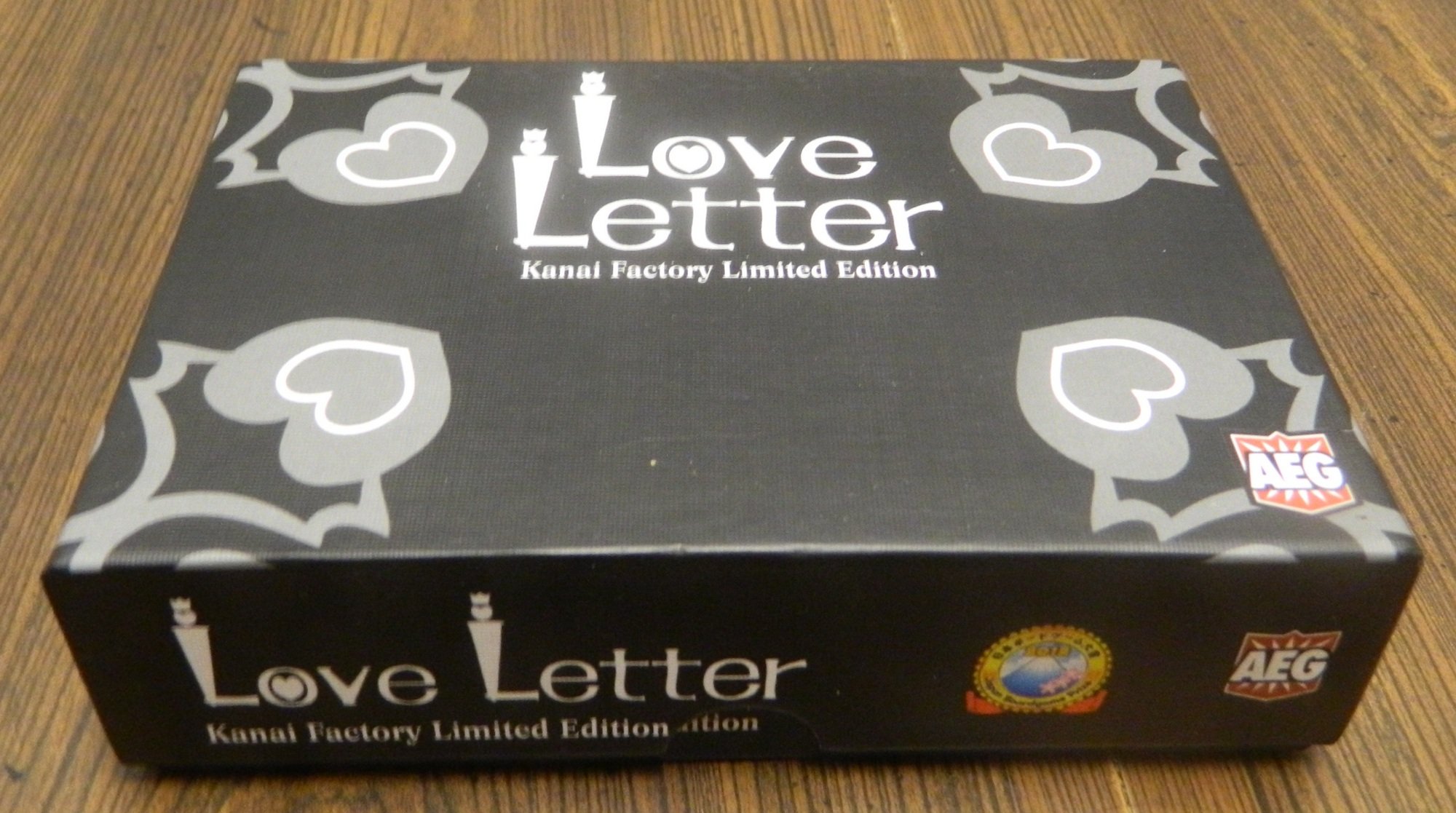 To begin the game if your edition of the game includes multiple princess/prince variations, you need to select one of the cards and the other variations are removed from the game.

Each player’s turn begins with taking the top card from the draw pile. The player looks at the two cards in their hand and decides which card they will play and which they will keep in their hand. The player then takes the action written on the card played (except for the minister card which is explained below). All cards played stay in front of the player who played them so everyone can see them. Play then proceeds to the next player. If a player is eliminated from the round they must place their last card face up on the table.

The game comes with the following cards:

A round ends if either:

The winner receives a token of affection. The card that was taken out before play began is added back to the deck, the cards are shuffled, and a new card is removed from the deck. A new round is then played.

When one player receives their fourth token of affection, they win the game.

Love Letter, first introduced in 2012, has built up a large fan base. As of the writing or this review, it is ranked as one of the 100 best board games of all time on Board Game Geek. With so many board games in existence it is quite an achievement to be ranked in the top 100. I recently found the on sale so I picked it up. I had high expectations due to all of the acclaim that the game has received. After playing the game I think the game is slightly overrated but is still a good game.

I purchased the Kanai Factory Limited Edition of the game. While for the most part the game is the same as other versions of Love Letter, there are some small differences which I will try to bring up in the review.

Love Letter’s greatest strength is how easy it is to learn. You could probably teach the game to someone in a couple minutes. With only 16 cards being used in the game, that is not particularly surprising. A turn includes drawing a card, playing a card, and following the directions on the card. That is how simple the game truly is. Each different type of card has a different ability but for the most part the cards do a great job explaining what the special ability of each card is.

Love Letter is really easy to learn but what makes the game great is that it has quite a bit more strategy than you would expect. You won’t be thinking so hard that your head will hurt but implementing a strategy will help you improve your chances of winning. At its’ core Love Letter is a deduction game. You need to try and figure out what card your opponents are holding so you are able to eliminate them. Due to the limited amount of cards and the fact that everyone knows how many of each card there are in the deck, over time you can begin forming a good idea of what card the other players are holding. One card is taken out of the deck at random so no one can be 100% sure what cards the other players have but you can make a good deduction.

Soldier Cards: The weakest card as far as rank is considered and also the most plentiful card in the deck. You would think only being ranked a one would mean that it is the weakest card in the deck. You obviously don’t want to have a soldier in your hand at the end of the round or when someone challenges you but otherwise I think the soldier is a strong card. Soldier cards are one of the cards that you can use to eliminate other players. If you have either deduced what card another player has or just have a lucky guess you can eliminate another player. The soldiers actually become more valuable later in the game, since with more cards face up it is easier to determine what card the other players are holding.

Clowns: The clown in my opinion is one of the weaker cards since it is only a support card and is the second lowest ranked card. You cannot eliminate any other players with the card. In my opinion the clown’s value comes from using it in combination with another card like the soldier or the knight. Using the clown you can find out what card the other player is holding. As long as they don’t play it before your next turn you can then either use the soldier, knight or wizard to eliminate that player on your next turn.

General: I think the general is one of the weaker cards along with the clown. The general has a high rank which helps at the end of the game or when one player plays a knight card. Otherwise the general’s only real use is when you know a player has a better card than you and you would like to swap hands with them. This is dangerous though since the other player is going to know what card you have and could eliminate you on their turn if they have the right card.

So after the long description of the different cards you are probably thinking that rounds could take a long time as players try to figure out the best strategy. Due to only having two cards in your hand at a time, unless one of the players are the type of people that have to over think everything each round is very quick. Each round lasts probably 2-5 minutes. A whole game of Love Letter will probably take between 10-30 minutes based on how lucky one of the players gets. Love Letter is not the type of game I would play for hours at a time but it is a great filler game. With its’ short playtime and the fact that it only has 16 cards, Love Letter is a great game to take on trips or anywhere where you will have a little time to kill.

Love Letter is a great game but it does have some issues in my opinion that keeps it from being perfect.

First I think the game would have been better served with a couple more card varieties. I am guessing that the creators decided to include only eight different types of cards in order to keep the game simple. I appreciate the game’s simplicity but more varieties of cards would have lead to more strategy.

Second Love Letter can be completely unfair at times and luck does impact the ultimate winner of the game. A couple times during the game I played, people were eliminated before they even got a chance to play a card. There are actually several ways that this can happen. Another player could use the soldier and randomly guess the card that is in your hand. You could also have a low card in your hand and another player could challenge you with a knight. You could also just randomly get the minister and another card with a rank of five or higher and be eliminated before you can play either of the cards. This is quite annoying for the player that gets eliminated since they have to wait through the rest of the round without even doing anything. Thankfully the rounds are quite short so no player should be forced to wait too long.

The final problem I had with the game only applies to certain versions of Love Letter. I thought the minister card could have been better described on the card. The problem with the minister card’s ability is that unlike all of the other cards, the ability is only active when the card is in your hand. Since all of the other abilities are activated when they are played, this could have been noted on the card. I actually played the card wrong several times since I didn’t know if the ability was only activated once it was played (like all of the other cards) or if once it was played it affected the player for the rest of the round. After some quick research online, the ability was clarified (the how to play section above correctly explains how the card works). I think the creators could have done a better job explaining the ability on the card itself though.

Finally I want to quickly discuss the components of the game. I purchased the Kanai Factory Limited Edition version so the artwork is different than the other versions of the game. Personally I thought the artwork was pretty nice but I prefer the artwork in the original version. Other people may prefer the Kanai Factory edition though since it is pretty much just a personal preference of art style. The only real complaint I have with the components is that you really don’t get a whole lot with the game. You get the 18 cards, the instructions, and the tokens of affections which are just red wooden cubes. I always like wooden components but the red cubes only act as score indicators and have no other purpose.

Love Letter is a beloved card game and it is a good to great game. I think it is a little overrated though. The game is simple to learn and play while providing quite a bit of strategy as well. On the other hand it is not the type of game I would play for hours at a time. Love Letter works as a classic filler game.

If you don’t generally like card games where you try to best utilize the ability of the card, Love Letter is probably not for you. In addition if the concept of the game does not appeal to you, the game will probably not be for you. If you are looking for a good filler card game though, you can’t go wrong with Love Letter. As a bonus at the time of this review Love Letter is quite cheap generally hovering around $6 plus shipping.