Being a fan of platformers I was excited to give Iggy’s Egg Adventure a try. The game looked interesting with a theme not used often in platforming games. After playing the game for a while I was about to give up on the game due to some issues I had with the game. I decided to give the game another chance and after fixing those issues I actually started enjoying the game quite a bit more than I was expecting. While at times it is a little frustrating due to the long length of the levels, Iggy’s Egg Adventure is a solid above average platformer. 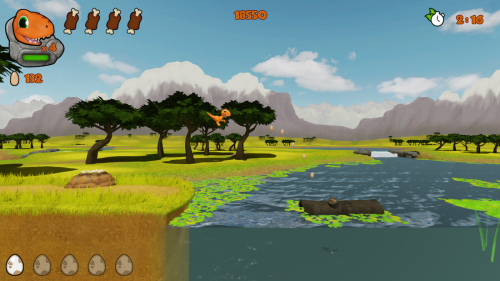 In Iggy’s Egg Adventure you play as the baby raptor Iggy or one of his friends which you unlock later in the game. The evil cavemen have captured your mother and all of her eggs. Your goal is to chase after the caveman in order to free your mother. Your journey will take you through the plains, desert, arctic, jungle, tar pits, and the cavemen’s village.

Iggy’s Egg Adventure is a pretty typical platformer. Most of the gameplay revolves around jumping between platforms avoiding hazards. The game takes a lot of inspiration from other retro platformers. It implements the lives system used in most older platformers. At the beginning of each level you get four lives in order to reach the end of the level. If you fail to reach the end of the level you will have to replay the entire level from the start. To help you gain additional lives, there are tiny eggs scattered throughout the levels that grant you an additional life every time you collect 100 of them. Without putting in too much effort you can usually expect one or two additional lives for a level based on the eggs you end up collecting. For the most part I liked the inclusion of the eggs since the game does a good job using them to help guide the player through the level. They are really hard to see at times though.

The game also includes a little more combat than your typical platformer. Iggy has a normal attack as well as a charged lunge attack. The attacks for the most part work well and are not so powerful that you are impervious to the enemies attacks. While there is some leeway, you need to time your attacks at least somewhat well in order to avoid taking damage from the enemy. I would like to bring up that while the graphics at first might appear to be that of a children’s game, Iggy’s Egg Adventure is not a game for children. It is rated Teen after all. Whenever you kill an enemy some blood does spurt out. The blood is not excessive but I don’t think it is appropriate for younger children either. The other reason the game is not for children is that the game is actually pretty hard which I will get to later.

While Iggy’s Egg Adventure doesn’t bring a lot of new mechanics to the genre, it does a good job with what it has. The levels are well designed and you will always know where you are supposed to go next. You may not successfully get there but you won’t get lost in the levels. Many of the levels have a couple different paths that you can traverse that offer different challenges. These could provide some replayability if you want to try the different paths through the levels.

The main thing with the game is that it is just fun to play. The controls are responsive. The game just does a good job recreating what I enjoy about old school platformers. While the game has some issues which I will get to next, if you like platformers you should have fun playing Iggy’s Egg Adventure.

Why Are These Levels So Long

As I whole I would consider Iggy’s Egg Adventure to be a moderate to hard platformer. The first three worlds are of a moderate difficulty with the later levels progressively getting harder. I would say that the platforming itself is only moderately difficult since it is pretty straightforward and at times the game seems to be a little forgiving with the narrow platforms. The creators made a good decision in this regard since the game would have been really hard due to the plentiful narrow ledges that you have to jump on in the later levels of the game. The boss fights (except for the last one since I am currently on level 6-3) are kind of easy once you figure out the pattern of how you are supposed to kill them.

The main reason the game is hard is the length of the levels. Unless you have mastered a level, each level will probably take at least 7-15 minutes to complete with some levels taking up to 20 minutes. These times are for successful attempts at the level while moving carefully through the level. Like many old school platformers the game uses lives so when you run out of lives you are sent back to the beginning of the level and have to start again. You will likely die multiple times in each level so you may end up spending 30-60 minutes on a level.

The long length of the levels gets frustrating at times. It is annoying when you are only a couple jumps away from reaching the end of the level but you lose your last life. You are then sent back to the beginning of the level and have to replay the entire 10-15 minute level over at least one other time. This happened to me several times. At times the levels seem to have the hardest part of the level at the end so when you die you have to replay the entire level just to get back to the same spot to try that part over again. Since these parts require quite a bit of practice you will end up wasting a bunch of time retracing your steps as you practice that part of the level. I can attribute a significant amount of the time I ended up playing the game to having to retrace my steps after dying near the end.

While I don’t mind having to restart the level after losing my lives, the problem is that the levels are too long. With levels being 10-15 minutes long, they are easily long enough to be spread out into two different levels. This is especially true for the levels that end with a boss. It is really frustrating to complete a 15 minute level and then have to face a boss that could easily kill you forcing you to play the whole level over again. I think these bosses could have easily been turned into their own levels. With shorter levels the game would have been quite a bit easier but also less frustrating.

While I didn’t like the long length of the levels, if you like challenging platformers I think you will like it since it increases the difficulty quite a bit. While most of the platforming is not particularly difficult, the length of the levels require you to make very few mistakes if you want to reach the end of the level before dying. The game gets extremely tense as you near the end of a very difficult long level with only one life since if you fail you will end up wasting at least another ten minutes in order to get back to the same spot in the level.

Generally speaking I usually don’t care about the frame rate of a video game. While some players need everything to run at 60 frames per second, I really don’t care how fast it runs as long as it runs smooth enough that it doesn’t affect the gameplay. The problem with Iggy’s Egg Adventure was that I was regularly only getting 15 frames per second. At 15 frames per second the game was choppy which made the game really hard to play and lead to so many avoidable deaths. What puzzled me about the frame rate is that most of my computer’s specs are at least twice the recommended specs for the game so I shouldn’t have been having frame rate issues with the game.

I fiddled with the graphic settings but nothing seemed to work. This was the point where I was ready to give up on the game. I decided to give the game one last chance because I could tell that the game had potential if I could just get past the frame rate issues. After fiddling with the graphics options a little more I was finally able to get an acceptable frame rate of around 30 frames per second. At least with my computer, the max screen resolution that I could play the game at before having the frame rate plunge was 1024 X 768. While I would have liked to play the game at 1920 X 1080, the game plays fine at 1024 X 768.

I have yet to finish the game (I am on level 6-3) and I am currently at around 11 hours for the game. While quite a bit of the length is due to having to replay the long levels after dying near the end, you do get quite a bit of gameplay out of the game. The game appears to have 18 levels along with a couple boss levels.

In addition to the normal game, the game has quite a bit of replayability. For collectible hunters there are 100 eggs to collect which are used to unlock costumes and additional characters. The characters do play differently so players who enjoy the game may want to explore the levels with some of the other characters in the game. Every level in the game also has a time trial so speedrunners can test their skills.

I have to say that I have had a strange journey reviewing Iggy’s Egg Adventure. At first I really disliked the game due to the frame rate that made the game almost unplayable. I was about ready to give up on the game and at that point the game would have earned a 1.5 or 2 stars. After finding a fix to the frame rate issues I started to like the game. While the game doesn’t really bring a lot of new ideas to the platformer genre; the levels are well designed, the controls work well and the game is fun to play. I just wish the levels were shorter to make the game a little less frustrating since I hate having to repeat 15 minute levels.