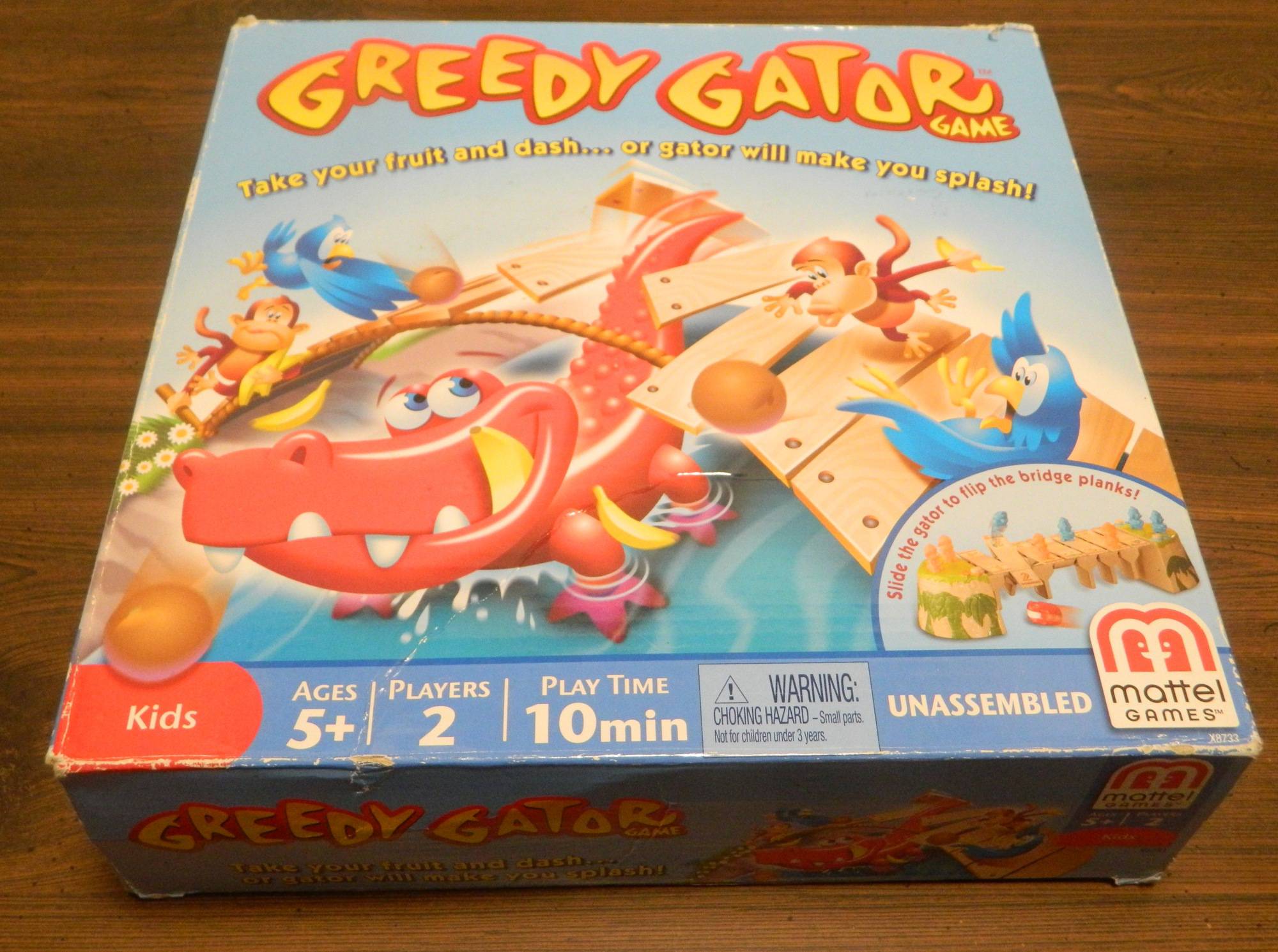 I normally wouldn’t give a game like Greedy Gator much thought. The game was clearly made for children which was emphasized by the fact that the game has a recommended age of 5+. I am typically not a big fan of games designed for children as I don’t have any children to play the games with and children’s games are usually not that good. I was intrigued by Greedy Gator though as it actually had what looked like a unique mechanic. I have played around 800 different board games and after a while you tend to see a lot of board games that utilize the same mechanics. The mechanic of rolling the gator to hit planks on the bridge looked like nothing I had seen in other board games. This mechanic alone was enough to intrigue me to try out a game that I otherwise would never try. Greedy Gator has one unique mechanic that could make for a fun game but unfortunately there isn’t much else to the game.

How to Play Greedy Gator

In level one the players will only use three of their movers. The other movers are returned to the box.

Any movers on the plank that is flipped up will be moved back to their start space. If a mover is knocked off the bridge but its plank was not flipped up, the mover is returned to the space that it was knocked off from.

Once a player has completed their turn, play passes to the other player.

A player wins the game when two of their movers reach the other side of the bridge.

The level two version of the game is very similar to level one. You will still only use three of your movers and only two need to reach the other side of the bridge in order to win the game.

The main difference in level two is that the plank you flip up determines the total number of moves that you can make. You can choose to move one pawn the total number of spaces. You can also split the number between several pawns. All other movement rules are the same as level one.

Level three is played the same as level two except for one change. In level three you will use all five pawns. In order to win the game you have to get three of your pawns across the bridge.

My Thoughts on Greedy Gator

As I mentioned at the beginning of this review, the main reason I even gave Greedy Gator a chance was due to the gator mechanic. Other games have probably utilized a similar mechanic, but I have never played a game that has had a similar mechanic to determine how many spaces you get to move your pieces. Basically you use the gator to hit a plank which determines how many spaces you can move your pawns. By rolling the gator you also have the ability to knock off the other player’s pawns sending them back to start.

While this mechanic is really simple, I thought it was kind of clever. It is surprisingly fun rolling the gator and hitting the bridge’s planks. I would say that it is pretty easy to hit a plank though. Unless you are terrible at aiming you should be able to hit a plank on most attempts. This is why I would highly recommend rolling the gator over a longer area as it should make the game a little more difficult. This should allow skill to play a larger role in the game.

I liked the gator mechanic but unfortunately there isn’t much else to the game. Outside of the gator mechanic you are stuck with a pretty basic roll and move game. You mostly just try to move your pawns to the other side of the bridge. This is a shame because I think the rolling mechanic could have been the basis for a good game. Unfortunately Greedy Gator doesn’t offer much more to create a full experience. This leads to Greedy Gator becoming boring pretty quickly.

The instructions for Greedy Gator refer to there being some strategy in how you move your pawns but it is very basic. Unless I am missing something there is only one strategy that you should implement in the game. It all revolves around the fact that you can’t have two of your pawns on the same space. If you move your pawn onto a space that already has one of your pawns on it, the pawn is moved to the next available space. You can use this to your advantage. Basically you want to build a bridge of pawns from your start towards the other side of the board. You move each pawn one space at a time to take full advantage of the jumping mechanic. You just need to keep moving whichever pawn is furthest back one space which will allow them to jump over the rest of your pawns giving you a bunch of free spaces. If you move all of your pawns as a group you can drastically reduce how many moves you need to use to win the game. I can’t really see any way that you could improve on this strategy.

Since the optimal strategy is so simple that players will catch on quickly, there really isn’t much strategy to the game. It therefore comes down to who rolls better. One untimely miss can lose you the game as each turn is important. Whichever player misses planks more often will likely lose the game. I generally like when games rely mostly on skill but it leads to Greedy Gator becoming pretty boring. The novelty might keep older children and adults interested for a while, but it wears off quickly.

Greedy Gator is not really for older children and adults, but I think younger children could really like the game. I think the game will work well for younger children for a couple reasons. First the game is quite easy to play. As you basically just roll the gator and move your playing pieces, the game is easy enough that children shouldn’t have any trouble understanding the game. An adult might have to first explain how to play the game, but children otherwise only need basic counting skills in order to play the game. The game also does a good job making the game more accessible by including three difficulty levels. This allows parents to progressively make the game more difficult based on their children’s skill level. After your children have a firm grasp on the basic gameplay though, I would probably jump right to the third difficulty as it is not much more difficult than the first level.

I think the other reason why Greedy Gator could appeal to younger children is the theme. The overall theme doesn’t have a lot of impact on the gameplay. You are playing as a group of animals that are trying to transport their food across the bridge while a hungry gator swims underneath the bridge hoping to get some food for itself. The reason that I think younger children will like the theme is that it is quite cute. The gator and animal pieces are pretty cute. The component quality in general is pretty solid where it should be able to withstand the wear and tear from normal play.

Should You Buy Greedy Gator?

I was initially intrigued by Greedy Gator due to the bridge mechanic. I have played a lot of different board games and I can’t remember playing another game with a mechanic like Greedy Gator’s bridge mechanic. Rolling the gator to determine how many spaces you get to move your playing pieces is a clever idea. The mechanic is kind of fun but it is quite easy to hit the planks unless you place the bridge quite a ways from both players. The biggest problem with Greedy Gator is that there isn’t much else to the game. Other than the bridge mechanic, the game is your typical roll and move game. Greedy Gator’s strategy is quite obvious as well which leads to the game becoming boring pretty quickly for older children and adults. I do think the game will appeal to younger children and their parents though. The game is simple enough that young children should have no troubles playing it and the theme should be appealing as well. I think young children could have quite a bit of fun with Greedy Gator.

While I thought the main mechanic was interesting, I can’t recommend Greedy Gator for older children and adults. If you have younger children though I would consider picking it up if you can get a good deal on it.

If you would like to purchase Greedy Gator you can find it online: Amazon