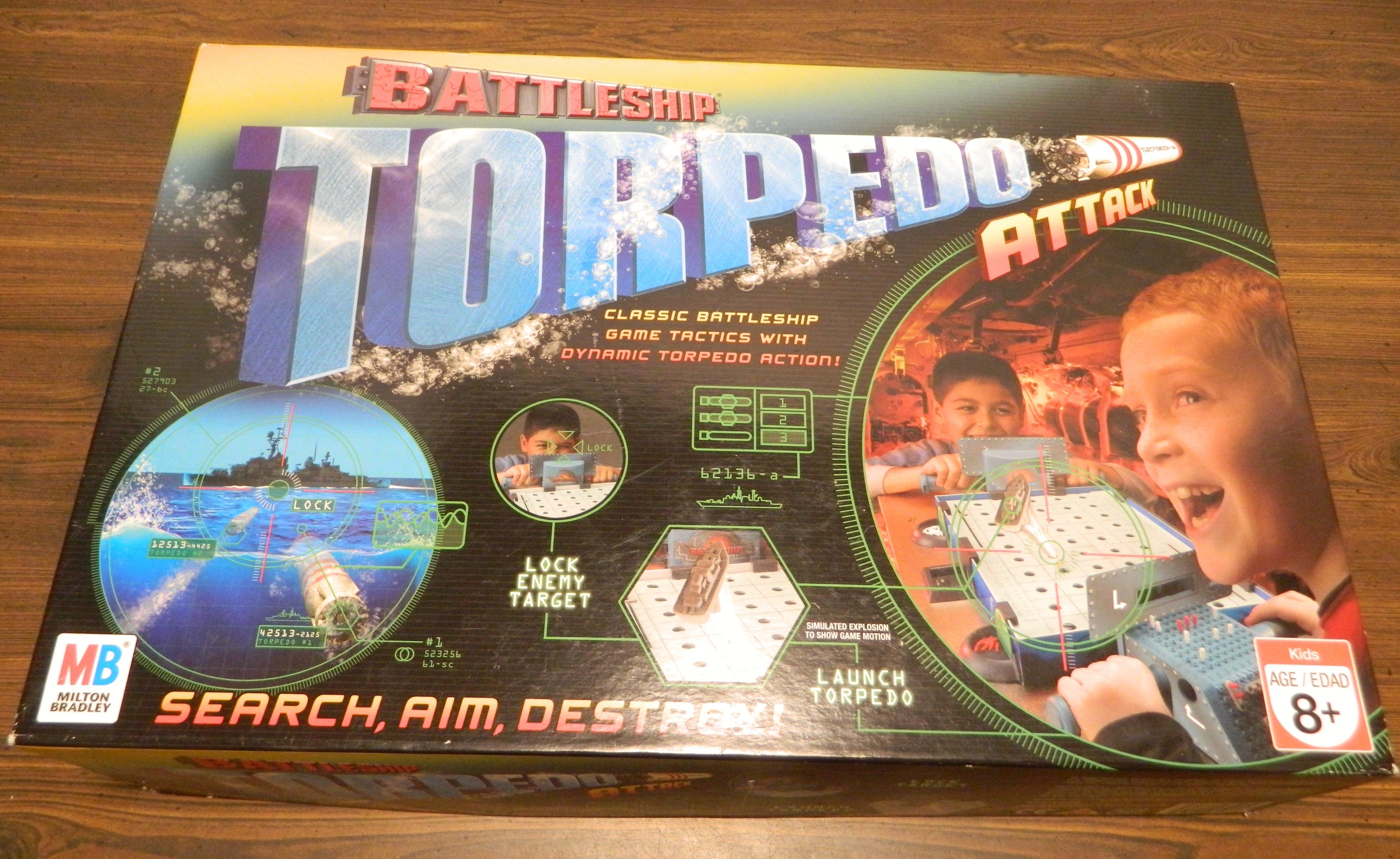 Originally starting as a paper and pencil game back in the 1930s, Battleship gained most of its popularity when it was officially commercialized in 1967 by Milton Bradley. Most people agree that Battleship is a classic board game as most people have played some variant of it at some point. For the game to have survived for almost 100 years it has to be pretty popular. Due to its’ popularity Hasbro and Milton Bradley have really tried to cash-in by introducing quite a few Battleship spinoff games in the past. Today I am looking at one of those spinoff games Battleship Torpedo Attack which was released back in 2007. Battleship Torpedo Attack is unique in that it takes the traditional Battleship gameplay and adds in a mechanic where you actually get to shoot the ships. Battleship Torpedo Attack doesn’t differentiate itself much from the original game, but the shooting mechanics do make it a more satisfying experience.

How to Play Battleship Torpedo Attack

If you are familiar with normal Battleship you can skim this section as it is very similar to traditional Battleship.

On a player’s turn they will call out one coordinate on the grid (B8 for example). The other player will look at their bottom grid to see if they placed one of their ships on that space.

Whether the shot was a hit or miss, the next player will then take their turn.

When a player has found all of the spaces that a ship occupies, the other player will say “ship located”. You will then move to the “Firing Torpedoes” action.

The player whose ship was discovered will place the corresponding large ship on the ocean grid between the two players.

Each space on the ocean grid corresponds to two columns and rows. When placing the ship it will be placed corresponding to the last coordinate that was chosen.

If the player successfully hit the ship they will score points.

The player who shot will return all of their torpedoes to their torpedo launcher. Play will then return to the Locating Ships phase with the other player taking their turn.

If a player scores 1,000 or more points, they will immediately win the game.

If neither player scores 1,000 points, the player who scored more points will win the game. If there is still a tie, the players will have a sudden death shoot out in order to determine the winner.

My Thoughts on Battleship Torpedo Attack

As pretty much everyone has played Battleship at some point in their lives, I am not going to spend a lot of time talking about that aspect of the game. I personally have always had mixed feelings about Battleship. The game deserves credit for being a classic and being accessible for the whole family. The biggest complaint with the game is that it relies on a lot of luck. The player who is better at guessing the location of the other player’s ships will win the game. There isn’t a lot of strategy/skill to the game outside of cheating. The only real strategy you can implement in the game is to take a methodical scattershot approach when choosing coordinates. The best way to methodically search the grid is to check every other space in a diagonal pattern. This significantly reduces the number of shots that you need to take to cover the entire grid. This method will catch every ship except occasionally the two space boat. A player that just randomly guesses can beat you, but using a methodical pattern like this does improve your odds in the game. Basically your feelings towards traditional Battleship will apply to this aspect of Battleship Torpedo Attack.

The one unique mechanic in Battleship Torpedo Attack is the ability to actually shoot the ships once you find them. I was curious about this mechanic as it could have really changed the game. After playing the game I had mixed feelings about it.

On the positive side the mechanic is actually kind of cool. The game actually does a surprisingly good job simulating what it must feel like shooting a torpedo at a ship. The game has players use a periscope component which uses some mirrors to allow you to see under the gameboard. You have to scan the gameboard until you find the peg that holds up the ship you are shooting at. You aim your launcher and then push a button to launch a marble at the ship. If you hit the ship it will shoot out of the board. I have to say that it is surprisingly satisfying when you are able to hit one of the ships. If you miss you will get two more opportunities to sink the ship.

While the traditional Battleship mechanics will get you the opportunity to shoot at the ships, this mechanic plays a big role in whether you will win the game. You can do really well at finding the ships, but if you can’t shoot them you won’t win the game. The game is actually pretty clever in how it divvies up the points to the different ships. The smaller ships are worth considerably more points than the larger ships. These ships aren’t really any harder to shoot. This was done as a way to reward players who are better at finding the smaller ships in the first phase.

The problem is that the shooting mechanics don’t work as well as they should though. First it takes a while to adjust to using the periscope properly. How you look through the periscope will effect your aim. The first time I played the game I ended up missing quite a bit. I tried a bunch of different ways to aim and none of them seemed to work. After the game was over I did a little experimenting and I think I figured out what was wrong with the launchers. Maybe it was just my copy of the game, but I had to aim off center in order to hit the ships. After I made this adjustment I basically hit the ship every shot. I am guessing this is because when they put the aiming reticle on the periscope they didn’t factor in the tilt of the tray placed under the gameboard (to guide the marbles towards the exit hole). When you adjust for this though aiming actually becomes pretty easy.

At the end of the day the shooting mechanics do improve upon the original Battleship. Instead of a game that mostly relies of guessing the right coordinates, there is a little skill in shooting the ships. Shooting the ships is also pretty fun. The problem is it doesn’t drastically improve the game. I think this comes from a few things. First they just don’t play a big role in the game. You will probably spend at least 80-90% of the game with the traditional Battleship mechanics. There is also the fact that the shooting mechanics are pretty basic. Once you get the aiming quirks down, it is pretty easy to hit the ships on your first attempt. The shooting mechanics do improve on the original Battleship, but I don’t think they do enough to make Battleship interesting for someone who has never cared for the game.

Before wrapping up I wanted to quickly talk about the game’s components. There are some things I liked and others that I think could have been better. Outside of the aiming issue I was actually  impressed with the launchers. They are easy to use and work really well. Most of the components are made of pretty solid plastic so they should last. For some reason the game doesn’t include many red pegs though. I don’t know why the game couldn’t have included more since you likely will have to remove the ships that have already been destroyed from your grids just so you can reuse the red pegs. I also think the game could have benefited from having some lights and sounds that would activate when you hit one of the ships as well. This would have added to the game’s cost, but I think it could have added quite a bit to the experience. The final problem is that it is a pain to fit all of the components back into the box. This is due to the bottom half of the box being shorter than the top due to it being used as part of the gameboard. You have to do a good job packing the components into the box for them to all fit and the box shut properly.

Should You Buy Battleship Torpedo Attack?

Battleship Torpedo Attack is an interesting spin-off game. For the most part it plays exactly like the original game. About 80-90% of the game is exactly the same as the original Battleship. If you are a fan of Battleship you won’t mind this, but it will turn off people that don’t like the original game. For the rest of the game you will get the opportunity to shoot the ships that you find. This mechanic has some aiming issues and can be kind of basic once you figure out what you are doing. It is hard not to have fun with the mechanic though as it is satisfying shooting the marbles and hitting one of the ships. For this reason I think Battleship Torpedo Attack is better than the original Battleship.

If you would like to purchase Battleship Torpedo Attack you can find it online: Amazon

Attack of the Jelly Monster Dice Game Review and Rules