Board Games » Reviews » Trivia » Are You Smarter Than A 5th Grader? Board Game Review and Rules 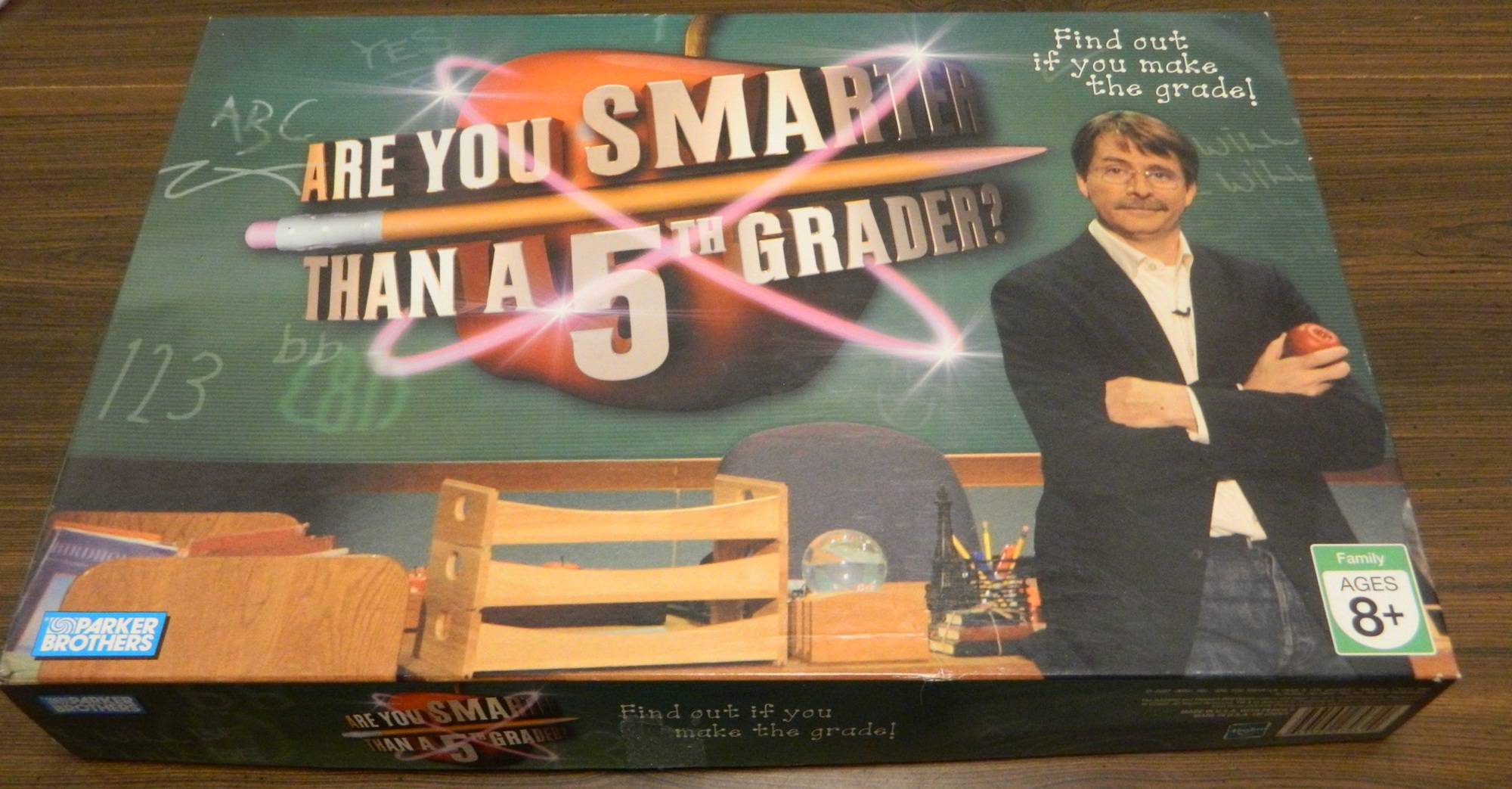 For those of you unfamiliar with Are You Smarter Than A 5th Grader? it was a gameshow that aired in the United States between 2007 to 2011 as well as in 2015. The basic premise of the show was that it was a trivia gameshow filled with questions about topics that children usually learn before the fifth grade. Real fifth graders were also present to offer help to the contestants throughout the game. With the show being quite popular for several years it is not surprising that eventually Parker Brothers made a board game version of the show. It also should not come as much of a surprise that the board game is basically exactly what you would expect, a solid trivia board game that plays exactly like the TV show.

How to Play Are You Smarter Than A 5th Grader?

The current contestant gets to choose which grade/category they will answer next. The category of each card is printed along the top of the card. If the player has already answered two questions from a grade they cannot answer anymore questions from that grade. Once the player has chosen a card, the card is placed into the card reader sleeve.

If at any point a player wants to quit after reading the question but before reading the answer they can. The player no longer acts as the contestant but the player gets to keep their playing piece on the space of the highest level that they reached.

If a player needs help with a question they have three different help options that they can use. Each option can only be used once by each player though. The game can end in two different ways:

My Thoughts on Are You Smarter Than A 5th Grader?

I will admit that there is not a lot to say about the Are You Smarter Than A 5th Grader? If you have ever seen the gameshow before you should have a good idea of what the board game plays like. The players take turns as the contestant while the other players answer the questions by themselves to provide occasional help for the contestant. When one contestant has finished their turn the role moves to the next player. Unless someone wins the $1,000,000 each player gets to play as the contestant once and whichever player wins the most money wins the game.

Not surprisingly Are You Smarter Than A 5th Grader? is a very generic trivia game when you break it down. Basically it is like every other trivia game except that the questions are based on knowledge taught to children in the first through fifth grades. Outside the small mechanics that follow the TV show, it plays exactly like every other trivia game. Unlike a lot of trivia games though it might appeal more to a family with younger children since the questions are easy enough for younger children. It probably won’t really appeal to trivia fans though.

The reason it won’t really appeal to trivia fans is that the questions are quite easy for the most part. With the questions being based on facts learned in the first through fifth grades you wouldn’t think the questions would be that hard. Before playing the game I was a little curious about the difficulty of the questions since the questions on the show were more difficult than you would expect since the show tended to pick topics that most people had forgotten a long time ago. The board game doesn’t follow the show in this respect though as most of the questions are quite easy. This is mostly because the questions rely more on general knowledge which you are less likely to have forgotten. Honestly most adults shouldn’t have much trouble with a lot of the questions. Unless you are unlucky and get a question you don’t know early in the game, most adults should be able to make it pretty far in the game. While this means the game won’t be that challenging for adults, it might actually work pretty well as a trivia game for kids as they should do much better in it than most trivia games.

While the game is for the most part a basic trivia game the worst parts of the game come from when the game tries to emulate the TV show. For some reason the designers of the game thought it was a good idea having each player take turns as the contestant. This creates problems as players are basically forced to sit around waiting for the other player to finish their turn. The other players can answer all of the questions but their answers don’t really matter unless they have to help out the current player. Helping out the other players is pretty pointless since the $1,000 reward you get for helping another player will rarely ever actually play a role in who ultimately wins the game. I don’t know if it is just me but I think it is kind of boring sitting around watching someone else play the game.

I really don’t understand why the designers decided to have all the players take turns as the contestant. There are a couple ways that the game could have handled each player playing as the contestant. First the game could have let players take turns answering questions. Each player would be playing by themselves but switching between the players would prevent players from having to wait so long for their own turn. Other than reducing the wait times for the other players, no player would get an advantage by going first or last. As everyone would be advancing at the same time no player would know how much money the other players would earn. This would have diverged from the gameshow but it would have improved the game.

The other potential solution to this problem is just to have all of the players play at the same time. A big problem with the official way of playing the game is that the game lasts way too long. If every player has to play through the game separately the game can get pretty long as each player could take 10-15 minutes as the contestant. If you have four players the game could take 30-50 minutes which is way too long for the game. To combat the length I would recommend that all of the players play as the contestant at the same time. Each player would be playing by themselves but everyone would answer the same questions. Each player would write down their answers and reveal them at the same time. If the players wanted to use a help the rules might have to be slightly tweaked but otherwise the game would play exactly the same while being more engaging and shorter.

As far as the components are concerned, Are You Smarter Than A Fifth Grader is pretty much what you would expect out of a trivia game made by Parker Brothers. You get two gameboards, some markers and trivia cards. The component quality is what you would expect out of a 2000s Parker Brothers game. The game comes with 300 cards with each card being double sided. Since there is only one question on each side of the card, this means that there are 600 questions. The game has a decent amount of questions but I think the game’s replay value could have been better.

Should You Buy Are You Smarter Than A 5th Grader?

Are You Smarter Than A 5th Grader? is basically what you would expect out of a trivia game based off of a gameshow. The game follows the basic formula of the show as each player takes a turn answering questions trying to earn as much money as possible. The questions are a little on the easier side which makes the game work better for families with younger children but will likely turn off trivia game fans as they likely will breeze through the questions. The biggest problem I had with the game is that it just takes too long as players basically have to sit around waiting for each player to complete their turn as the contestant. Otherwise Are You Smarter Than A 5th Grader? is a very generic trivia game.

If you don’t like trivia games there is no reason to pick up Are You Smarter Than A 5th Grader? If you are a trivia buff the game also will probably not be for you since the questions will be too easy for you. If you have younger kids that like trivia games though or you really liked the TV show, it may be worth picking up the game if you can get a good deal on it.

If you would like to purchase the Are You Smarter Than A 5th Grader board game, you can find it online: Amazon

Are You Smarter Than A 5th Grader?