History of the Tiger Electronics Ltd

Tiger Electronics was founded in 1978 by Randy Rissman, Gerald Rissman, and Arnold Rissman in Vernon Hills, Illinois. In its’ early days the company mostly made electronic items like phonographs. As the company grew it started branching out into electronic games and toys which is what the company is most known for. Tiger Electronics made their name with their extensive brand of LCD games that people either love or hate. Tiger Electronics had a lot of other successful products though including the 2-XL Robot, Brain Warp, Furby, Giga Pets, Lazer Tag,  Skip It, and the the Talkboy (made popular by the movie Home Alone).

After working with Hasbro for quite a few years, Tiger Electronics was eventually acquired by Hasbro in 1998 and is still a division of Hasbro to this day.

I would like to note that the following lists are as accurate as I could find. As Tiger Electronics released many games over the years I have probably missed some. If you are aware of any games that I am missing feel free to leave a comment and I will add them to the list as quickly as I can. 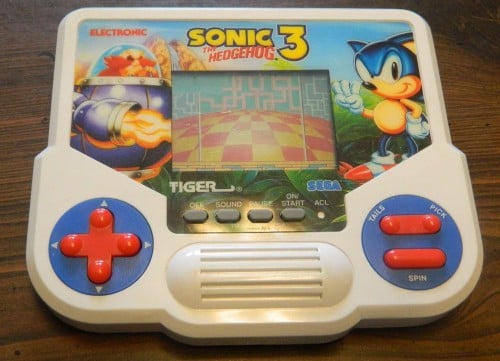 Growing up as a child of the late 1980’s and 1990’s I remember the fad of the Tiger Electronics “video game” handhelds. I had several of them as a child and I loved playing them. As a video gamer who never had an original Game Boy I didn’t have much for options for portable gaming until I got a Game Boy Color so I had to settle for the Tiger handheld games. I didn’t really mind since I really enjoyed the games.

Like most things from your childhood though, Tiger Electronic handheld games are not nearly as enjoyable as you remember them. While I loved the games as a child it is really hard to play them for longer than a couple minutes at a time today. The games are pretty bad. The games get really repetitive and without the instructions it is really hard to even figure out what you are supposed to do in most of the games. You mostly just press buttons hoping to press the right buttons at the right times to “win”. The Angry Video Game Nerd’s look at the Tiger Electronic handheld games does a good job summarizing the many problems with the games (the video does have some strong adult language).

Most of Tiger Electronics’ handheld games utilized a LCD screen and a couple buttons. The games worked by having the different elements of the game printed on the game screen. Your character and the enemies would appear on the screen  when the game lighted up various sections of the screen. This meant that you only had a couple of options of what you could do at any given time. Basically you could move left, up, and right one space and then after a short period of time would return to the starting position. In addition to movement the games usually included a jump or attack button which you could use to attack enemies or avoid them. Most of the games had a couple different levels and the goal was to avoid/destroy enemies to successfully make it to the end of the level. This was easier said than done because you usually had no idea what you are supposed to be doing in the game and the controls are far from responsive. Basically if you got past the second or third level you were pretty good/lucky at the game.

The main reason for their success is generally attributed to their price. Tiger’s handheld games were considerably cheaper than the Game Boy. Each game itself was cheaper and since each game was standalone you didn’t have to buy a system like the Game Boy to play the games. This was probably pretty attractive to cash strapped parents that wanted to buy a portable game for their children.

The other main reason for their success was the fact that Tiger was the master of utilizing franchises. Most major movie franchise and quite a few TV shows had their own LCD game. Tiger even got the handheld licenses to many video game brands like Castlevania, Double Dragon, Duke Nukem, Ninja Gaiden, Sonic, Street Fighter, and Virtua Fighter. It’s too bad Tiger didn’t put more work into actually making good games to go with all of the franchises they were able to license.

While Tiger Electronics handheld games weren’t that great, they will still hold a spot in my heart as I can still remember how much I loved them as a child.

This list is particularly long so if you are looking for a specific title you should consider using your web browser’s search function which can be accessed with Ctrl+F on PCs and Command+F on Macs.

Beauty and the Beast

Beauty and the Beast Wrist Game

Cabbage Patch Kids Butterfly Chase (Thanks to Kitty in the Comments)

Castlevania Symphony of the Night

Jordan vs. Bird One on One

Kings of the Beach

Ninja Turtles: The Next Mutation

The Perils of Mickey

Pokemon I Choose You Challenge

Punch Your Lights Out

The Simpsons Bart vs Homersaurus

Snow White and the Seven Dwarves

Spider-Man Revenge of the Spider-Slayers

Star Trek The Next Generation

Tim Burton’s The Nightmare Before Christmas

Where in the World Is Carmen Sandiego

Who Wants to Be A Millionaire

While most of Tiger Electronics games where standalone games, Tiger eventually started to branch off into cartridge based games which started with the Quiz Wiz line of games. The Quiz Wiz was a traditional trivia game that used different cartridges that contained trivia questions centered around specific topics. While I can’t find any information about how successful the Quiz Wiz line of games were, sixty different cartridges were released so the game had to have been somewhat successful. Here is a 1994 advertisement for Quiz Wiz.

Complete List of All Quiz Wiz Games and Cartridges

Cartridge #5 Ripley’s Believe It Or Not

Cartridge #8 All About Science