The object of the game is to try and get rid of all of the cards in your hand in order to win the round. Every player starts the game with 100 points.

Each player is dealt the following number of cards: 2-3 players (7 cards), 4 players (6 cards), 5-6 players (5 cards). The rest of the cards form the draw pile. The first card from the draw pile is flipped face up in order to start the discard pile. The current dealer chooses one of the three elements on the face up card (shape, number or color) that the next player will need to play. If the card is a word card, the dealer picks one of the visible elements on the card. 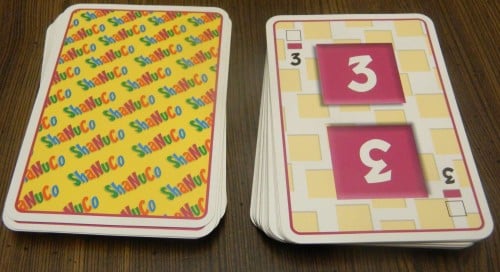 When a player plays this card they get to choose whether the next player will need to play either a three, purple or square card.

If the draw deck is ever depleted, the discard pile is shuffled and used as the new draw deck.

When one player plays their last card they win the round. They gain 25 points while the other players lose points equal to the face values of the cards still in their hand (10 points for any special cards). After five rounds whoever has the most points wins.

Just looking at the box for Shanuco should immediately remind you of UNO.

Shanuco draws so much inspiration from UNO that I would call it an UNO variant. For the few of you not familiar with UNO/Crazy Eights, the basic premise is to get rid of all of the cards in your hand by matching either the color or number of the top card on the discard pile. Add in a couple special cards and you have the basics of UNO. Shanuco takes this basic gameplay and tries to distinguish itself by adding two additional mechanics.

First Shanuco adds a third element to every card. In addition to number and color, each card also has a shape on it. I found this idea interesting. By having more elements to match, there would be more options for every player. This could have added some more strategy to the game and could have reduced some of the luck that is prevalent in UNO.  The problem with adding another element is that by itself, it would have made the game too easy.

To fix this problem the game added the second new mechanic which was that the player who plays a card gets to pick one of the three elements on the card that the next player has to match. This rule over-corrected the difficulty though and at times it is too hard to find a match. This rule  gives you less options than you have in UNO since you are only able to match one element. If another player knows that you don’t have a certain element, you are in trouble since they can keep trying to force you to play a card of the element that you don’t have.

In my opinion the rules for Shanuco were not written particularly well. The rules are not that complicated but they are written in a way that makes the game sound a lot more complicated than it actually is. Some sections in particular are written where if you don’t pay close attention you may misread it and mess up part of the game.

Some of the rules are also not thought out. Take the show card for example. The show card allows you to look at another player’s hand. While the card can be used on any player, I could find few instances where you would play it on anyone other than the next player. By playing it on the next player you can see what cards they have. With this knowledge you can pick an element that they don’t have and force them to draw a card.  If you play it on anyone else, the knowledge gained is pretty pointless since you can’t really affect any players other than the next player.

Just like most card games, luck plays a big role in the game. Shanuco has little to no strategy since you are just playing cards to the table and hoping to guess an element that the next player does not have. Getting the right cards and guessing well are the two main ways to win the game. Since luck is so important, you get the feeling that your actions didn’t have a lot of impact on the game.

The components of Shanuco are okay. The card stock is pretty thick so the cards should be at least somewhat durable. The simplistic artwork does make it easier to see the different elements on each card. The artwork is bland and boring to look at though. I also think the cards are way too big. They are probably close to twice as large as a normal playing card. With the cards being so big it is hard to hold the cards in your hands and to shuffle them. I don’t know why the cards couldn’t have been the normal size of a playing card.

Shanuco tried to take the UNO/Crazy 8’s formula and add some elements to it in order to improve the game. The additions had potential but both failed to really add anything new to the game. If you don’t like UNO, you definitely won’t like Shanuco. If you like UNO, you are better off just playing UNO. The only way I could recommend Shanuco is if you found it really cheap and were willing to try and find ways to tweak the rules in order to fix some of the issues with the game.