To begin the game snap one belly on all of the pigs. Each player takes a pawn and all 20 feed chips of the same color. The pawns are placed at the start line. In four and three player games each player puts two of their feed chips into one of the pigs. In a two player game both players put two chips in two different pigs. Every pig is then randomly placed on one of the colored blankets in the middle of the board.

The youngest player starts the game by rolling both dice. The number indicates how many feed chips the player will need to feed to the pigs. The color die indicates one of the two pigs that the player must feed chips to. The player gets to choose the other color. If the “?” is rolled the player gets to pick both pigs that they will feed chips to. The player has to feed at least one chip to both selected pigs. The extra chips can be distributed between the two chosen pigs in whatever quantity the player wants to. When feeding the pigs the entire chip must enter the pig before moving onto the next chip. 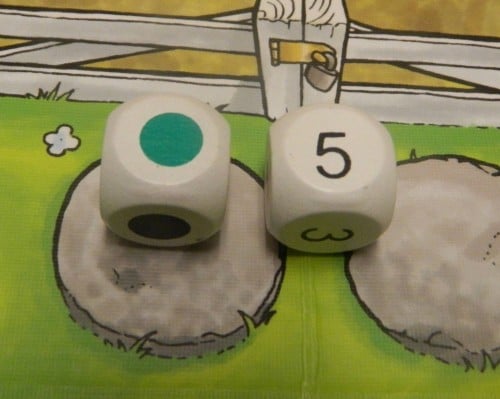 In this scenario the player rolled a five and a green symbol. The player must use five chips with at least one chip being inserted into the pig on the green blanket. One of the chips will also need to be placed into one of the other pigs. The last three chips can be put into either of the two pigs selected.

If the player has played all of their chips for the round and no pig’s belly has popped (fallen off), play passes to the next player. If while playing a chip a pig’s belly pops, the player’s turn is immediately over. All of the chips in the pig’s belly are sorted by color. The player who popped the belly does not get any spaces for their chips. The other players get to move their pawn forward one space for every chip in the pig that popped. The belly is then popped back onto the pig and the next player starts their turn. 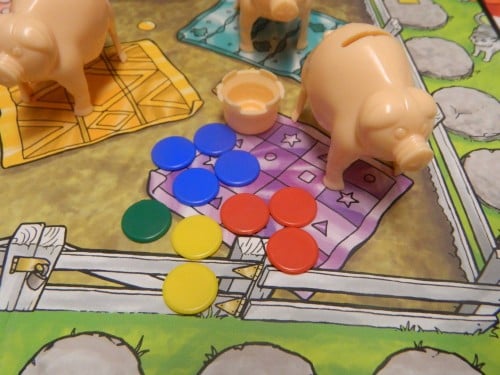 One of the players has popped the pig’s belly. Whoever popped the belly gets zero spaces. Otherwise the green player would get one space, the yellow player two spaces, the red player three spaces, and the blue player four spaces.

The game continues until someone reaches the finish line. That player wins the game. If two players reach the finish line on the same turn, whichever player would have moved farther along the track wins the tiebreaker. If the players are still tied whoever has the least amount of chips in front of them (has the most chips still in the pigs) is the winner.

Klaus Teuber, most known for creating Settlers of Catan, is well known in the board game industry. I would consider myself a fan of Klaus Teuber since Settlers of Catan is one of my favorite board games and I also enjoyed Wacky Wacky West. Pop Belly was produced by SimplyFun a company that for the most part makes children/family games. While I am not a big fan of family/kids game since I don’t have any children of my own, SimplyFun does tend to make solid games. While Pop Belly is not the type of game I would generally play, I was intrigued due the aforementioned reasons. While Pop Belly has some interesting gameplay ideas, it is just too simple to keep your attention.

Due to the dice not directly impacting movement, the game has a little strategy to it. Obviously you want to feed the pigs that have the most space left in their bellies. If a pig looks to be full there is no reason to put chips in it unless you are forced to due to the dice roll. You may want to try and spread your chips around a little though to avoid putting all of your chips in one basket. If you put all of your chips in one pig and you end up popping that pig, you are going to lose a lot of spaces. Pop Belly is far from a strategic game, but I like that the game found an interesting way to add some simple strategy to a generic roll and move game.

The biggest problem with the game comes from the fact that it was designed for small children. The game is just too easy for adults. The pigs never change positions so after a pig has popped, the players can just remember how many chips the pig can hold. When one of the pigs pop, the next player has a huge advantage since they can just stuff a bunch of chips inside the pig that just popped. If the players can at least somewhat remember how many chips each pig holds, the game comes down to who rolls the best.

The color die has the biggest impact. Since you are forced to place chips in the color you roll, if you roll the wrong color you are going to pop the pig and there is nothing you can do to prevent it. I would say 90% of the pigs that were popped were due to a player being forced to place a chip in an overstuffed pig. How well you roll the color die will determine how well you do in the game.

The number die at least gives the player some flexibility. Rolling high or low could be beneficial for players. If the pigs are mostly empty you want to roll a high number. This will allow you to stuff the pigs with a lot of chips. If most of the pigs are close to being full though you probably want to roll a low number so you don’t make any of the pigs pop.

One thing I did find odd about the game was the theme. Despite being a young children’s game the theme is kind of disturbing if you think about it. Essentially in the game you are stuffing pigs with food until their stomachs explode. That doesn’t really sound like a children’s game to you does it. I doubt any young children are going to think about that though so the theme is pretty harmless.

Finally the components for the most part are nice. I always like when games include wooden playing pieces. The pigs show enough detail to not distract from the game. The only real issue I had with the components where the pig bellies. At times they are kind of hard to snap back on. Younger children may have some issues with this aspect of the game and may need some help. I also could see the stomachs failing to stay on after extended use.

Pop Belly is an interesting game. The mechanics are interesting and could provide some fun. The game does rely a lot on luck though. In addition the game is too easy for adults and older children. After a couple rounds you can figure out the game and it then becomes a game of who can roll best. As an adult Pop Belly is the type of game you can probably enjoy once but will then have no interest in playing again.

Pop Belly was designed for younger children though and I think that is where it will shine. I think younger children will really enjoy the game since it should be the right difficulty level for them. Younger children may need some help though attaching the pig’s bellies after they pop off. While the theme is kind of disturbing when you think about it, I can’t imagine any young children thinking about it enough that it becomes an issue. If the game sounds like something that your child would enjoy, they most likely will enjoy it. 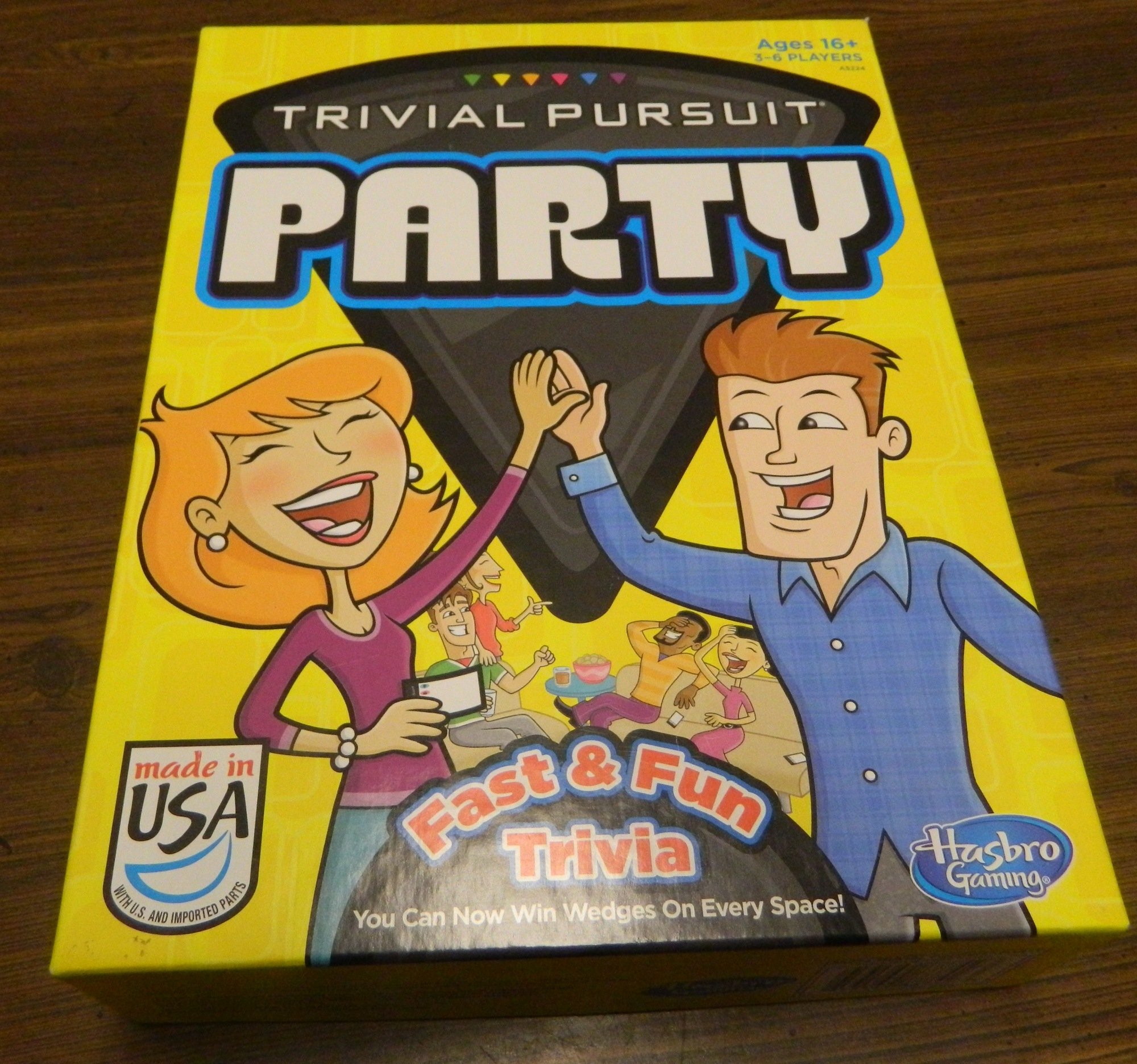 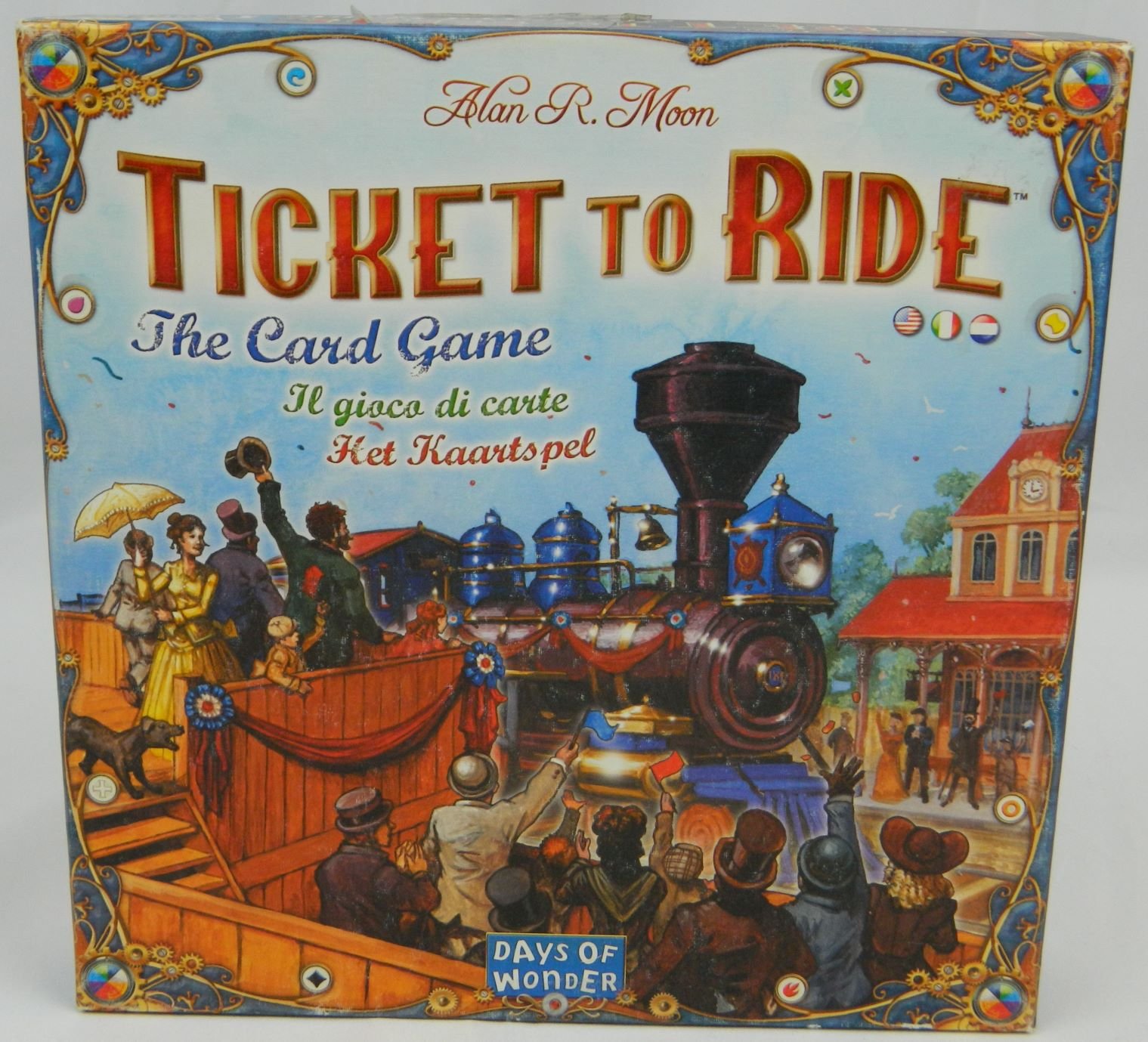 Ticket to Ride The Card Game Review and Rules 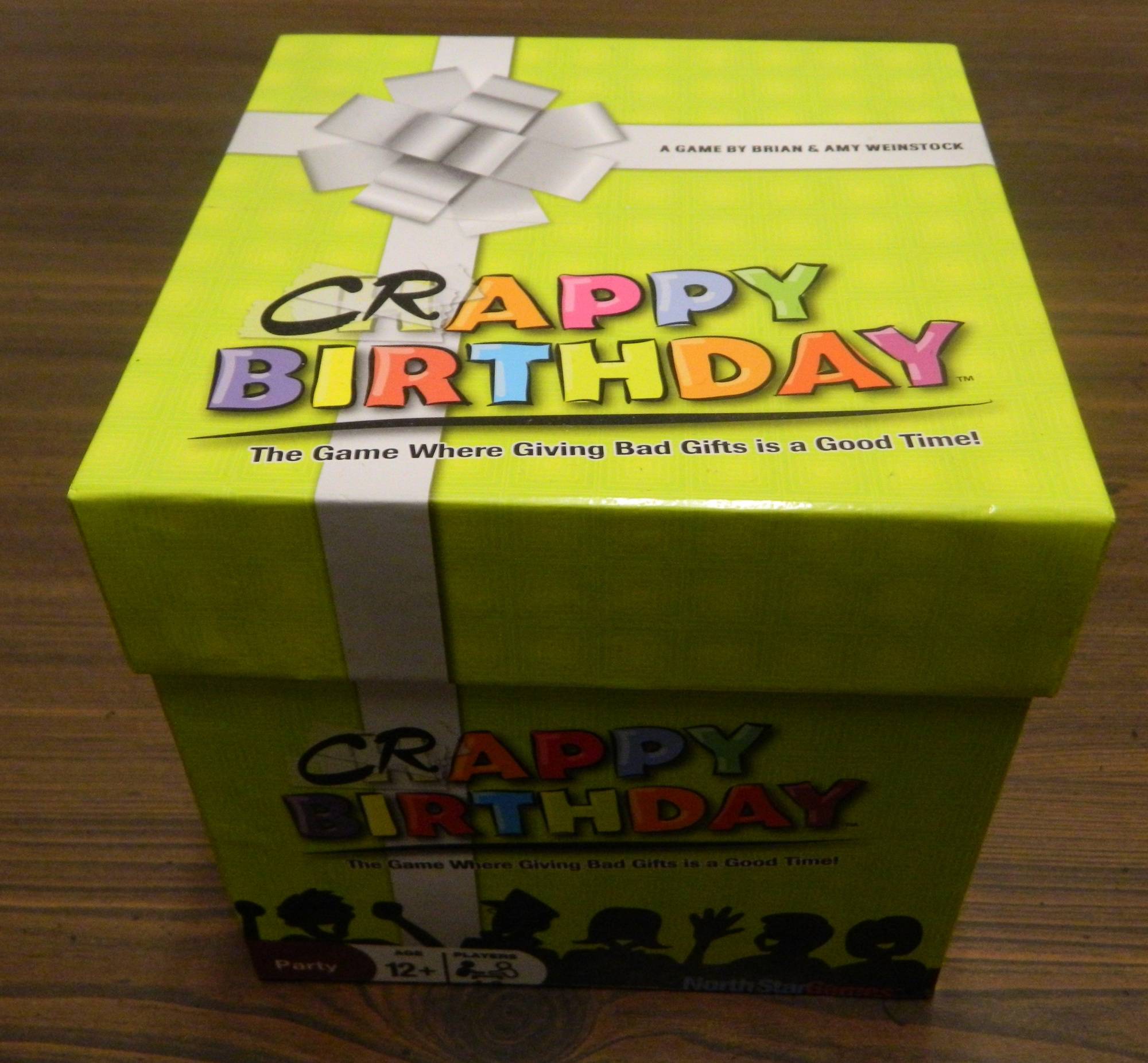 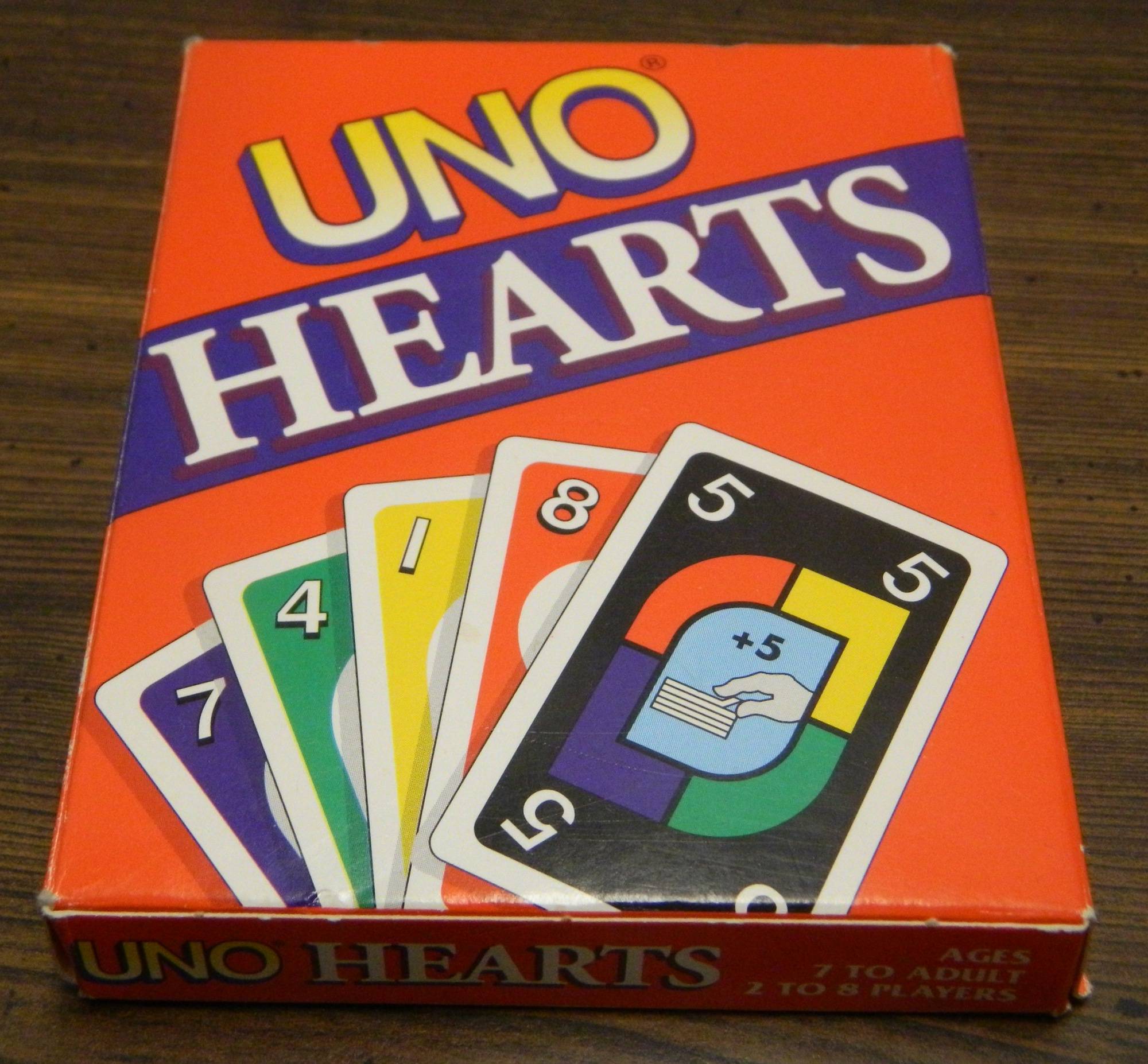 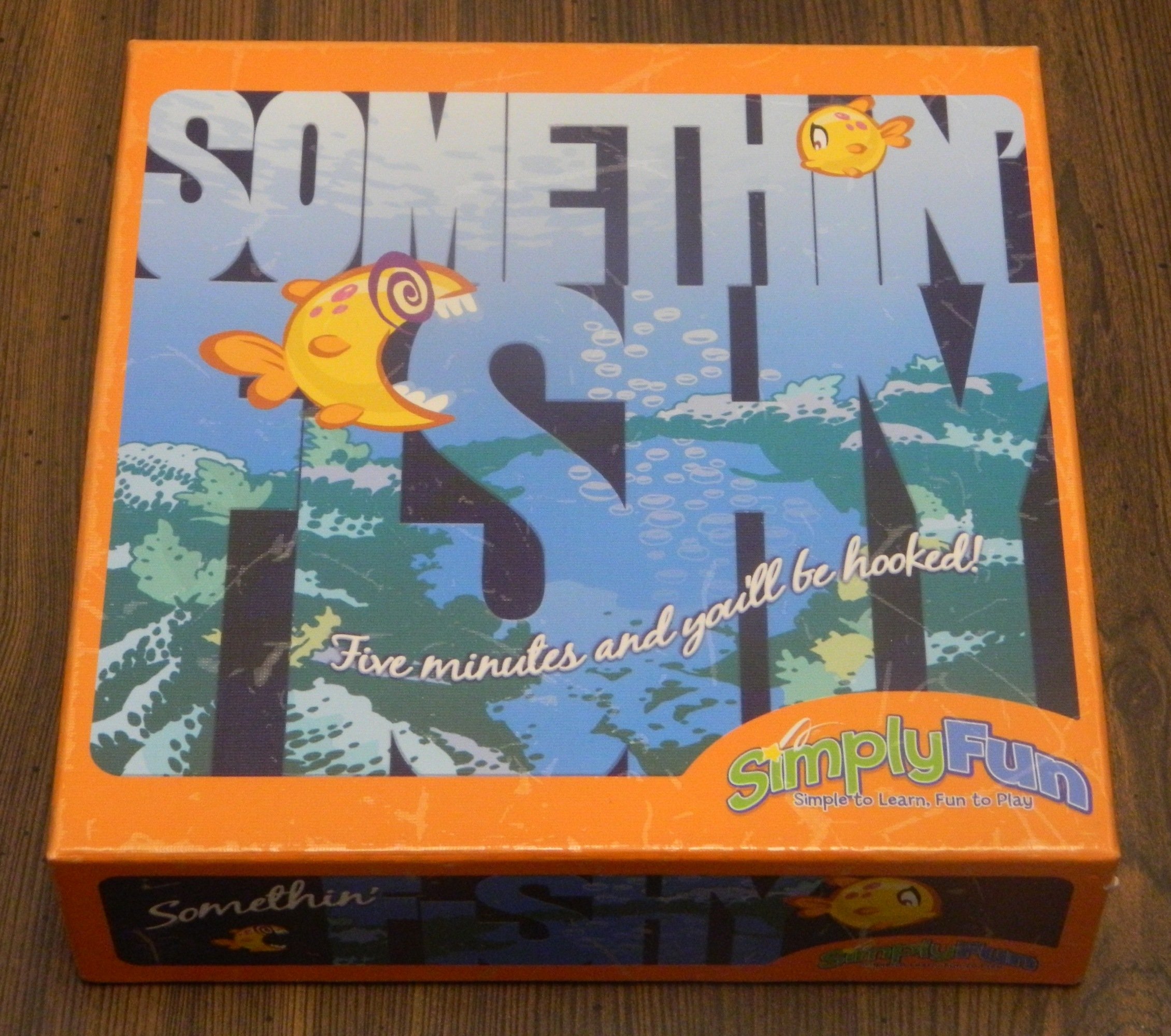