To be the first player to get all of the mice out of their portion of the house.

Everyone counts to three and starts shooting their mice towards the center of the house with the objective of shooting it into one of the other player’s section of the house. All mice are placed onto the launchers lying down and only one mouse can be placed on the launcher at a time. When a mouse is shot into your side of the house, you will have to shoot that mouse into another part of the house along with the mice you start the game with. Since players don’t take turns, players should try to shoot their mice as quickly as possible. 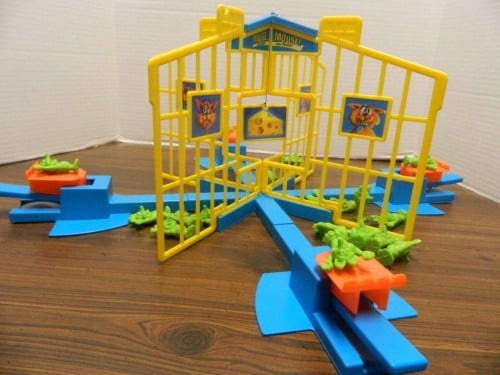 If you are playing with two or three players, any mice shot into the part(s) of the house not being used by a player stay there for the rest of the game.

The game ends when one player has no mice left in their part of the house. They put their hands over the hole to their side of the gameboard and say “No Mice”. This player has won the game. 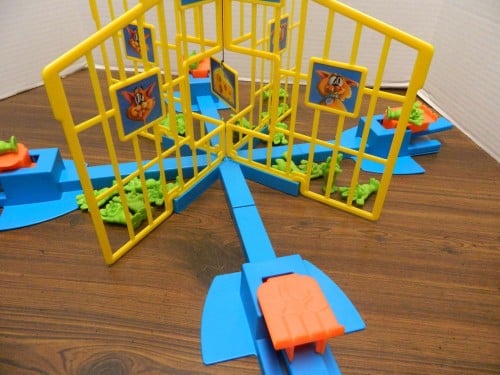 This player has cleared all of the mice from their side of the house. Therefore they have won the game.

There are several games from my childhood that I still remember to this day. One of those games is Mouse, Mouse! Get Outta My House. For some reason I really remember this game despite the game not appearing to be a very popular game since the game was never re-released. As a child though I loved these type of games where you flung objects into the air. While Mouse, Mouse! Get Outta My House is not a fantastic game you can’t deny that it is enjoyable flinging mice through the air.

Despite being a game meant for children, you can still have a surprising amount of fun with Mouse, Mouse! Get Outta My House as a adult. If you don’t like these quirky children’s games you won’t like the game but if you do I think you could have more fun than you would expect with the game. For some reason it is fun flinging the mice as quickly as possible trying to get them out of your side of the house. Even though the game is over 20 years old I think children who like these type of games will still have a blast with the game.

The one major catch is that the game is only fun in really short doses. The typical game of Mouse, Mouse! Get Outta My House takes around 2-5 minutes to complete. If you are looking for a really quick game, this game is it. Due to the short length, you will likely play a couple games. Once you have reached five or six games though you will likely get sick of the game. The game is fun for 15-20 minute periods and then you will want to put the game away for a while before you will want to play the game again.

Being a children’s game, there is a pretty high reliance on luck in the game. Usually you have to get lucky in order to win the game. Mouse, Mouse! Get Outta My House has more skill to it than you would expect and you can get better at it the more you play it. Figuring out how to place the mice on your flipper along with figuring out how hard to hit your flipper does impact how successful you will be at the game.

Speed is also really important in the game. As I mentioned the game generally lasts around 2-5 minutes. Players that can quickly set up and launch their mice quicker have an advantage in the game. How fast the opponent across from you is can be as important as how fast you are. While you could shoot mice towards the players to your left and right, most of the mice you shoot will go towards the player across from you. If you are sitting across from the best player you are not going to have a good chance at winning the game. This is why I would highly recommend switching positions between games.

With so much chaos as mice fly all over the place some strange things are bound to happen when you play the game. In one game two people shot their mice at the same time. These two mice somehow collided with one another in midair and deflected back to their original owners. The funniest experience I had with the game though happened when one player hit their launcher and the launcher came apart flinging parts all over the place. The funniest part was that this launched the mouse back at the player that was launching it. The mouse somehow fell into the player’s pocket. What is the likelihood of that scenario happening ever again?

Finally the components of Mouse, Mouse! Get Outta My House are kind of hit and miss. I really like the mouse figures. I kind of wish they were different colors though so you can see at the end of the game where each player’s mice ended up. The gameboard is quite easy to assemble and the components seem pretty stable. The problem is that the flippers seem to fall apart way too often. One player regularly kept breaking apart their flipper. They weren’t even hitting it that hard. It might be due to age/wear and tear. The best solution is to just hold your flippers together since holding the front of the launcher seems to help the mice fly further anyway. The other main complaint with the components is the outer box for the game is very large which is regrettable for a game that you would only play occasionally. For space conscious people this may be a deal breaker.

Despite being made for children and relying quite a bit on luck, I have to admit that I had more fun with Mouse, Mouse! Get Outta My House than I was expecting. For some reason the game is fun like a lot of these other quirky 1980s and 1990s children’s games. If you like these type of quirky kids games I think you could get quite a bit of fun out of Mouse, Mouse! Get Outta My House. The problem is that while the game is fun, it is only fun in short doses. After about 15-20 minutes you are going to want to put it away for a while before you will want to play it again. 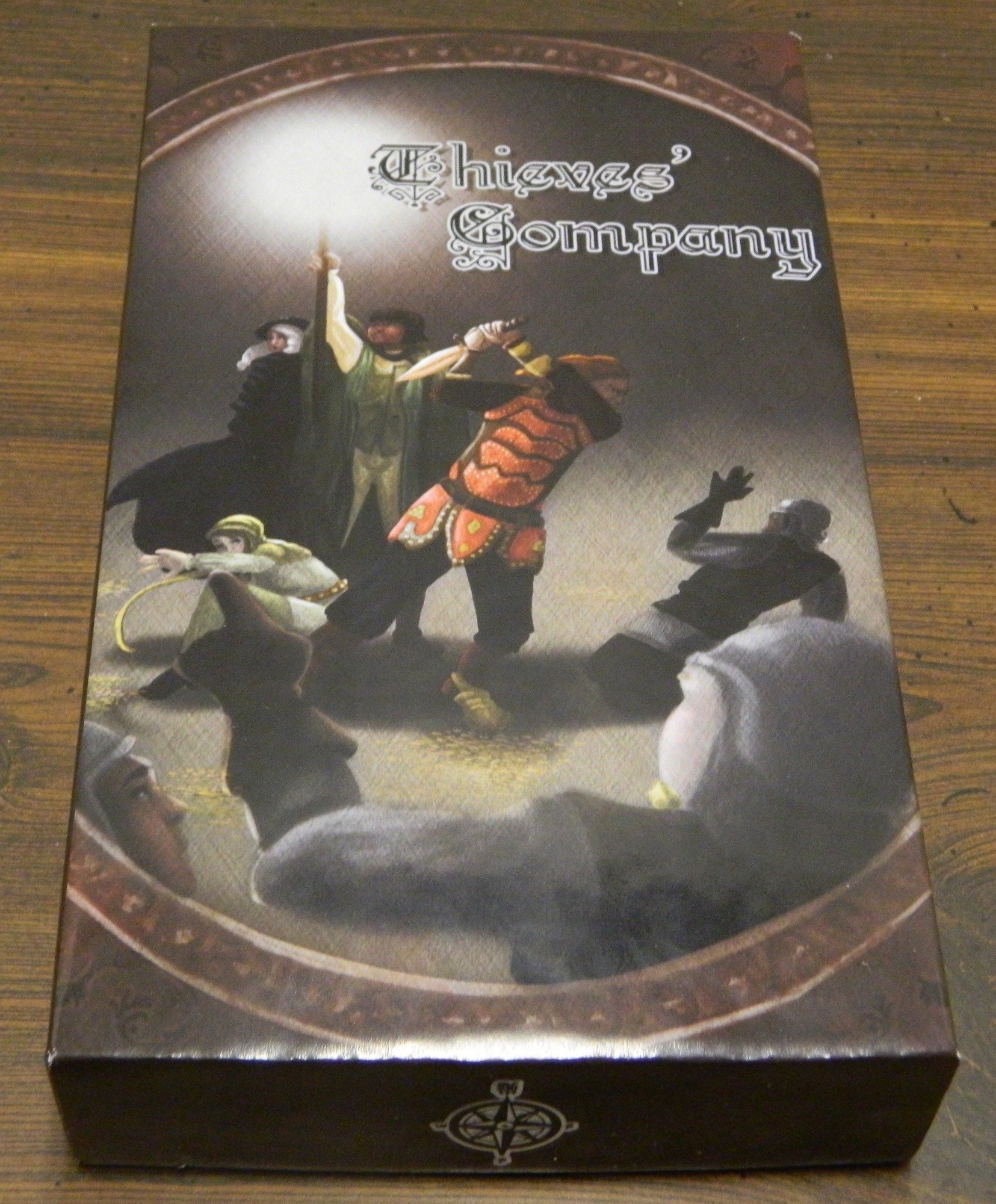 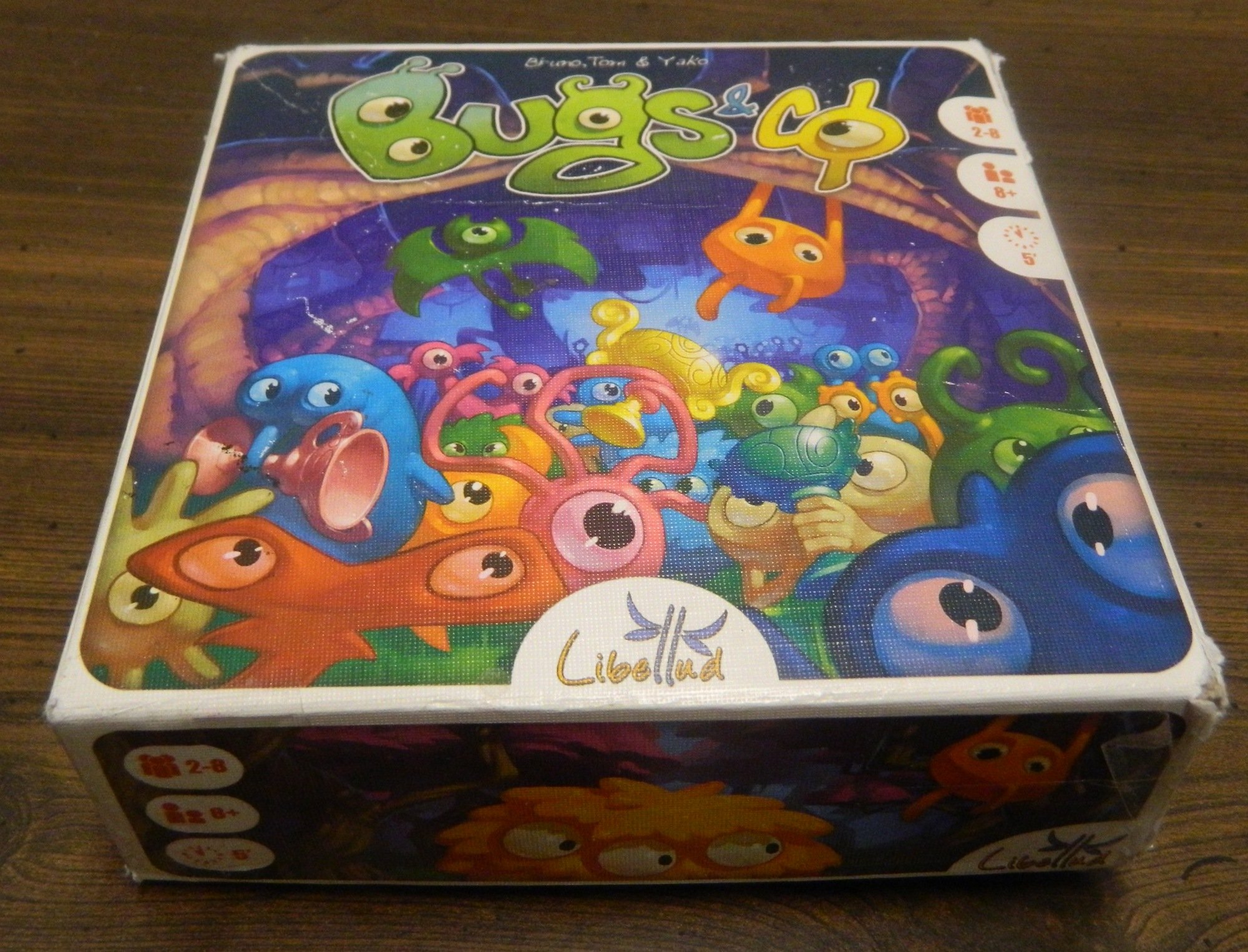