I will fully admit that it is a bit weird to be reviewing a series called Masters of Sex on a blog called Geeky Hobbies but the show isn’t exactly what you would expect from a title like that. Most people who have never heard of the series would probably immediately think it’s porn but even though there is plenty of nudity and sex in this series, it is actually a Showtime period drama about two sexuality researchers. As both a fan of television and someone who loves to learn about basically any type of history, I was intrigued to learn about this topic. After watching a portion of the series (the first season and part of the second), it is clear that while Masters of Sex: The Complete Series is a very compelling drama that is worth watching, it isn’t a great historical account of the subject. Too many liberties are taken for this to be used for learning purposes (though these changes do help improve the drama and entertainment).

Masters of Sex begins in the 1950’s and is about the research two pioneers of human sexuality made in a time when sex was barely even spoken about, let alone studied (especially female sexuality). The series is also about the relationship between those two researchers, William “Bill” Masters (played by Michael Sheen) and Virginia Johnson (Lizzy Caplan). Bill is a genius gynecologist who is attempting to do a groundbreaking study on human sexuality but the university decision makers aren’t happy with his research. He doesn’t care and continues his studies, even after the university shuts him down. By his side is former nightclub singer Virginia Johnson, who lies about being a student to get the job. Over ten years passes over the course of the four seasons Masters of Sex aired, as the two’s research continues to expand and their personal relationships develop. This series is based loosely on a true story. The two main characters are named after the two real-life sexuality researchers but there are some differences between the characters and their real-life versions. Basically, Masters of Sex is one of those series that utilizes real-life events to a certain point but only loosely so it can’t really be considered completely factual. However, there are kernels of truth included (for example, the real-life Virginia Johnson was an actual singer before becoming a researcher but for a radio station, not a nightclub).

It shouldn’t be surprising that a series called Masters of Sex has a lot of graphic nudity and sex. Of course a show about sexuality researchers is going to have a lot of both. In just the first episode alone, there are three different women that go topless and two pretty graphic sex scenes. It calms down a bit after that but there are still plenty of boobs, butts, and sex. If you are skittish about series with a lot of nudity and sex, Masters of Sex is definitely not for you. However, most of it is more artful than smutty.

I will say I was slightly disappointed that Masters of Sex isn’t really a heavily-researched, completely true-to-life story. However, while I wish it was more historical than a dramatic version of the events, some of the changes the series made actually are some of the more compelling elements of the series. By adding new side characters (and/or changing them a bit) and making changes to the plot (sometimes slight, sometimes major), it helps increase the drama and entertainment factor of the series. Overall, I am fine with the creative liberties taken since I will fully admit it makes for a more interesting story. However, those of you who are only interested in this release for historical reasons should probably look elsewhere (as you’ll constantly have to look up online what stuff is real and what storylines were changed or fabricated).

I was actually quite surprised by how entertaining Masters of Sex was. As I wrote earlier, I was expecting to learn more than be entertained. One thing that really surprised me about the series was just how funny it was. I thought it would be super serious with little to no humor but it was much funnier than I was expecting (including the strangely hilarious opening title sequence). The stories are very interesting and the cast is outstanding. Michael Sheen and Lizzy Caplan both do a great job in the lead roles and other great actors like Beau Bridges, Allison Janney, and Ann Dowd are part of the recurring cast.

While I enjoyed all of the episodes I was able to watch before I needed to publish this review, I must note that I didn’t get to the last two seasons which are almost universally considered weaker than the first two. Obviously without having watched them, I can’t confirm whether or not that is true but since there is almost a 20-point drop on both Metacritic and Rotten Tomatoes for those seasons, I’m going to guess those seasons are much more mediocre.

I received the Blu-ray version of Masters of Sex: The Complete Series but Mill Creek Entertainment has also released a DVD version as well. As a show that aired on a premium TV network (Showtime) and a period drama, I figured the series would look great on Blu-ray and it does. The picture quality is very clear. I will say that the series doesn’t do the “period” part quite as well as I was expecting though. To be honest, in a lot of the scenes I really didn’t feel like I was in the ’50s or ’60s. The series uses some period props but it feels more like present day with just a few period items to try to convince viewers that they are watching the ’50s. 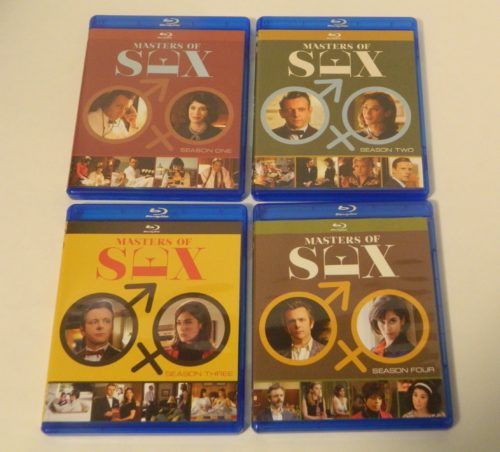 Mill Creek Entertainment did a great job with this release. Their packaging for Complete Series releases has been getting much better and outside of the outer box being a bit less sturdy than I was hoping for, I have no complaints with this release. As you can see from the picture included, each season gets its own Blu-ray case meaning the discs aren’t in sleeves, stacked, or any of the other methods Mill Creek uses to keep the packaging cost down (for Complete Series they really haven’t been using the cheap methods for a few months now). Quite a few bonus features are included on this release (over three hours worth) from a behind-the-scenes featurette and a commentary on the pilot episode to a handful of deleted scenes.

Masters of Sex: The Complete Series has a pretty niche target audience but I would say most fans of prestige dramas should enjoy it. If the topic or story intrigues you, it is definitely worth the price. Four seasons and 46 episodes of a premium TV series for $35-40 (what the Blu-ray is currently going for on Amazon) is a great deal. While they supposedly aren’t as great as the first two seasons, this is also the first time you have been able to pick up seasons three and four of the series on Blu-ray or DVD. Highly recommended for fans of prestige dramas.

Masters of Sex: The Complete Series was released on Blu-ray on August 21, 2018.

You failed to note that to squash the 'Complete Series' onto 8 Blu-ray Discs, vs. Sony's version of seasons one and two spread across a total of 8 Blu-ray Discs, Mill Creek had to do some serious compression, resulting in a degraded image that other reviewers commented on in detail. Hint: buy the Sony releases and note the difference!