The Looney Tunes have been a staple of children’s cartoons since their introduction back in the 1930s. I honestly have never had a particularly strong opinion of the franchise. I find some of their shorts to be funny, but I am not a big enough fan that I have seen all of the shorts or would collect any of the merchandise. With how old and popular the franchise has been, it is not particularly surprising that Looney Tunes has had a number of board games made for it over the years. While I think the Looney Tunes could be used to make a pretty good game, it also is the type of franchise that would be used to make a quick buck off of its fans instead of trying to actually make a fun game. This was pretty much my expectation for the 1966 Looney Tunes game as it seemed like a really generic game as you compete in a race with a number of characters from the franchise. The 1966 Looney Tunes Game is basically what you would expect from a game from its era, a pretty generic draw a card and move game with very little to hold your interest.

How to Play the Looney Tunes Game

You will begin your turn by drawing the top card from the draw pile. The card will have a picture of one of your three characters as well as a number. You will move your corresponding character the number of spaces shown on the card. When moving the following rules must be followed:

When you draw a card that will get one of your playing pieces to a finish space, you don’t need to reach the space by exact count. Once a playing piece has reached a finish space, it will remain there for the rest of the game. If on a future turn you draw a card corresponding to a character that has already reached the finish, you will pass your turn. 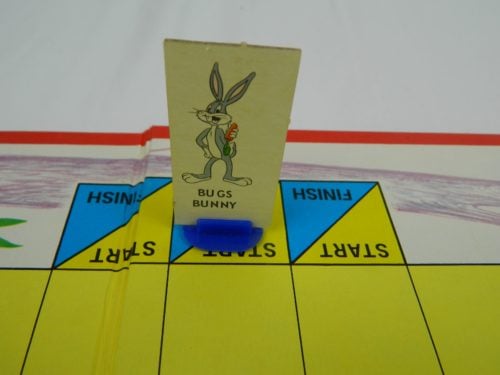 The blue player has gotten their Bugs Bunny piece to their finish space. This player will no longer be able to move Bugs Bunny during the game.

If all of the cards are drawn, the discard pile is shuffled to create a new draw pile.

The first player to get all three of their playing pieces to their finish spaces will win the game. 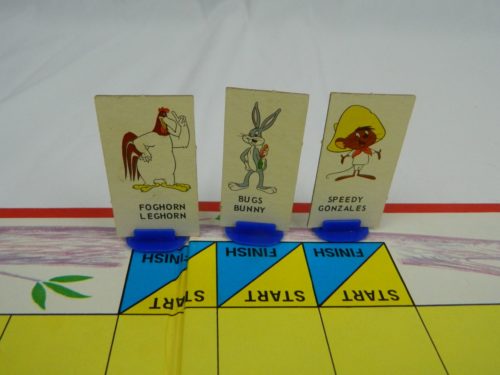 My Thoughts on the Looney Tunes

While I went into the 1966 Looney Tunes Game with an open mind, unfortunately the game was pretty much what I expected it to be. The game’s concept is pretty simple. The objective is to get your three runners across the board and to their finish spaces before the other players. To do this you basically draw a card and move your character the corresponding number of spaces. Movement is simple as you can move any direction except for diagonally. You also have to avoid moving through spaces that feature another character. Basically if you have played one of these type of games before, you pretty much know what to expect.

There is only one thing somewhat unique about the game. Most games in this genre of drawing a card and moving your piece the corresponding number of spaces rely on a simple straightforward path that you must follow as you move towards the finish. Instead of this the Looney Tunes Game utilizes a grid game board. You can choose the direction that you want to move which adds a little decision making to the game. It is usually obvious what you should do though. Move towards your finish while trying to avoid areas where you characters will get trapped.

Where this gets more interesting is that each player’s final objective is in the opposite direction of another player. When playing with four players this creates a congestion problem in the middle of the board as everyone reaches the area at about the same time. I was honestly a little surprised by how congested the middle of the board can get. Players could actually get blocked in where they won’t be able to move. Otherwise you may have to move backwards or to the side just to find a way forward. While you naturally would like to move straight towards your objective, you may be better off moving towards the edges of the board first just to avoid some of the congestion. The congestion can become kind of chaotic at times. While this isn’t enough to overcome the game’s faults, I found it to be kind of interesting.

If the Looney Tunes Game sounds kind of basic to you at this point, it should as it was clearly a game made for children. The game has a recommended age of 7-15, but I would personally probably lower both ages. As long as you have some basic reading skills you shouldn’t have any trouble playing the game. Meanwhile the game is too simple for fifteen year olds to get much enjoyment out of it. Due to its simplicity the game plays quite quickly. The game claims an average length of 20 minutes, but I think it could be even shorter if players make their decisions quickly and the players don’t have terrible luck. The correct decision in almost every situation should be really obvious so each turn shouldn’t take long.

For the most part the game feels like a pretty typical board game from the 1960s which took the Looney Tunes theme and pasted it on in order to hopefully sell more copies. There is nothing particular about the gameplay that really ties it to Looney Tunes outside of the crazy congestion in the middle of the board at times. You could have pretty much pasted any theme on the gameplay and it wouldn’t have really impacted the gameplay. I thought the game’s theming was okay visually and the art will likely appeal to fans of the franchise, but the game otherwise doesn’t really offer anything to Looney Tunes fans.

While I applaud the Looney Tunes Game for actually doing some interesting things for its era, it still has the same fetal flaw as every other game from this genre. Basically the game relies almost entirely on luck. The decisions you make in the game are so obvious that there really isn’t much strategy. The only way your decisions will likely impact the game is if you make poor choices. Meanwhile luck pretty much determines how well you will do in the game. This is because the cards are far from even. Generally you want to draw a higher numbered card as it will let you move further on your turn.

Probably even more important though is what character you end up drawing. Basically all of the players will eventually hit a point in the game where they have gotten one or two of their characters home. At this point they are just as likely if not more likely to draw a card that will force them to skip their turn than actually do something. The ultimate winner of the game will likely come down to who draws the most cards of their last remaining character to get them to the finish before the other players. You could get two of your characters to the finish quickly, but if you don’t draw cards for the third character there is nothing that you can do. Basically whoever draws the best cards is going to win the game.

This reliance on luck really hurts the game. Outside of terrible decisions, any decisions you make in the game likely won’t be able to overcome bad luck. In many ways the game basically plays itself. You are basically left with a game that is quite boring. Outside of the theme appealing to fans of the franchise, the game doesn’t really have anything to it that will appeal to players outside of young children.

As for the game’s components, they are pretty typical of what you would expect from a 1960s children’s board game. You basically get a bunch of components made out of cardboard. The cardboard is typical of the era. The components do their job, but don’t do much more. The artwork is not bad and will likely appeal to Looney Tunes fans. Otherwise there really isn’t anything particularly special about the components.

Should You Buy the Looney Tunes Game?

Unfortunately at the end of the day the Looney Tunes Game ended up pretty much where I expected it to. At its core it is a draw a card and move your playing pieces game. It does have a slightly interesting element as the gameboard is a square grid where players are trying to get to different locations. This creates a lot of congestion in the middle of the board creating a little strategy as you try to figure out how to make it around the other players. Ultimately the game is quite easy and quick to play. Unfortunately since the game has little strategy, the ultimate outcome will come down to who draws the right cards at the right times. Whoever is the luckiest is almost guaranteed to win the game. This leads to a board game that can be kind of dull.

Unfortunately I have a hard time recommending the Looney Tunes Game. Unless you are a big fan of the franchise, I see nothing about the game that will be enough to overcome the game’s issues. If you are a big fan of the Looney Tunes though or have young children, there may be enough to the game that may warrant a purchase if you can get it cheap enough.