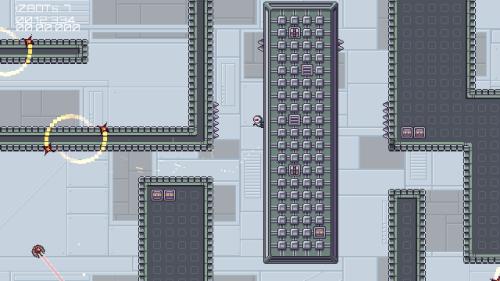 iZBOT is a classic 2D Super Meat Boy-like platformer (and is pretty much a lighter and easier version of that game). The game has sixty levels (split into three stages) and three boss battles but most of them are more of the quick, 30 second type of levels (except for the challenging ones which will take you quite a few tries to complete). Each level has a collectible called hardtogetium (an awesome name by the way) which you will need to get to beat the game 100%. Other than that, iZBOT is pretty much the same as any of the other hundreds of platformer games on Steam.

Pros and Cons of iZBOT: 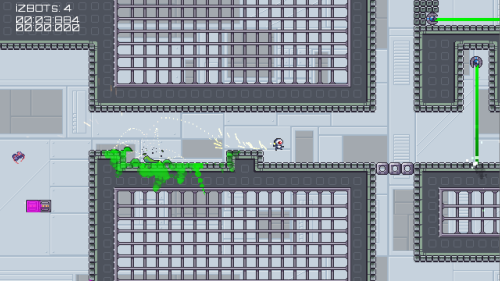 While iZBOT is pretty derivative and doesn’t really bring anything new to the platforming genre, it is still a solid game that I had fun playing. This review was really hard to write mostly because iZBOT doesn’t do anything poorly but it also don’t innovate or do anything amazingly well either. The game is basically an easier version of Super Meat Boy that isn’t quite as polished or unique. It’s worth playing but only if you love platformers and have already played the well-known ones on Steam.

While iZBOT was obviously attempting to be one of those super tough platformers from the NES days (as well as the recent revival of them), it actually isn’t as difficult as it looks. I really didn’t struggle with any of the levels until late in the game. The first stage is simple (it took me about twenty minutes to beat the twenty levels and the boss), the second stage is harder but still mostly pretty easy, and the last stage starts to get hard, especially towards the end of it (although some of the levels in the third stage are still pretty easy, I even beat one of them on my first try). Even if you struggle on a level, most of them take less than thirty seconds to complete so if you die, it really isn’t that painful (this is a good thing because it keeps the game from becoming frustrating). Even the hardtogetium isn’t that difficult to get in most of the levels. Hardtogetium, more like easytogetium.

The bosses also aren’t particularly hard. The final boss took me 33 tries but half of those deaths were before I actually got to him (the last boss level has a short section where you have to outrun something that will you kill you if you go to slow). I’m not saying iZBOT is a simple game (some of the levels did take me like 30-50 tries to complete) but it is nowhere near as difficult as you would think. I would say the difficulty is moderate but definitely fair. If you play a lot of platformer games (and have beaten games like Super Meat Boy), you probably won’t have too much trouble with the game. However, if you aren’t experienced in the genre it might be somewhat difficult for you.

The only exception to the tough but fair difficulty is the last couple of levels. For some reason, the last few levels of iZBOT get a lot longer and much more difficult. While the last few levels of any game are obviously supposed to be the hardest, they are a little too long in this game. The last few levels feel like several late stage two or early stage three levels combined together and you have to complete all of them back-to-back without dying. I wish they were either broken in half or had checkpoints so you didn’t have to do them all over again when you die (because these levels are the only somewhat frustrating thing about the game).

In the early stages of the game, iZBOT’s levels aren’t particularly interesting or unique. Most of them are just run fast, hop from platform to platform, and avoid the enemies type levels. However, towards the middle of the second stage the game starts to offer some more unique level designs, some of which are actually even quite brilliant (see the GIF below for an example of one creative level). If it weren’t for the boring level design in the first half of the game, level design would actually be a huge positive for iZBOT which could have gotten the game an above average score (instead of the completely average three I gave it). Overall, the level design is still solid, I just wish the first two sets of levels were as interesting as the final stage.

© Ruxar An example of some pretty good level design later in the game. While I know it looks pretty tough, it isn’t as hard as you would think and this is a section of one of the hardest levels in the game.

iZBOT is obviously inspired by the platformers of the NES and SNES era and it does a pretty good job of replicating them from a presentation standpoint. The pixel art is solid but not nearly as pretty as some of the other pixel art games I’ve reviewed in the past (there’s nothing wrong with it, it just isn’t as spectacular as a game like DiscStorm). The chiptune music sounds like it came out of an NES game (as it was intended to), but it is just alright. The music is far from annoying, it just isn’t particularly memorable. I love retro video game music but I wouldn’t listen to iZBOT’s music outside of the game (like I do for a lot of games).

iZBOT is $9.99 on Steam which I think is pretty fair but you might want to wait for a small sale before picking it up (just because there are so many platformer games to pick from on Steam). While $9.99 isn’t bad for a game with 63 levels, it did only take me a little over four hours to complete (and that’s with me getting about 80% of the hardtogetium, it should take me just another hour or so to get the rest and complete all of the achievements). That’s $2.50 per hour, which is neither great nor terrible. If you love platformers, you will probably get your money’s worth. However, if you are price conscious it might be a good idea to wait for a slightly better deal because you will only get one or two nights of play out of it.

iZBOT is another entry in an already crowded genre on Steam. To get more than an average score, you pretty much need to offer a completely unique mechanic, a lot of originality, or do something amazingly well. Unfortunately, iZBOT really doesn’t offer anything new. However, since the game is pretty fun to play and is at least average in every area, I have no problem giving it a completely average rating of a three out of five.