A surprisingly popular theme for the board game industry is farming. There have been hundreds of board games created over the years that try to turn growing and selling crops/animals into interesting board game mechanics. I normally wouldn’t find the idea of farming to be all that interesting and yet for some reason I find the theme to be quite inviting for interesting board game ideas. There have been quite a few bad farming games, but there have been some really good farming games as well. When I saw Farming Dice at the thrift store I didn’t really know what to think. It seems like it is one of those games that have been mostly ignored as there are few people online talking about the game. The idea of a farming dice game sounded interesting though since if it was done correctly it could have lead to a really good game. Farming Dice has some interesting and unique ideas for a dice game, but it just feels like something is missing from the game.

How to Play Farming Dice 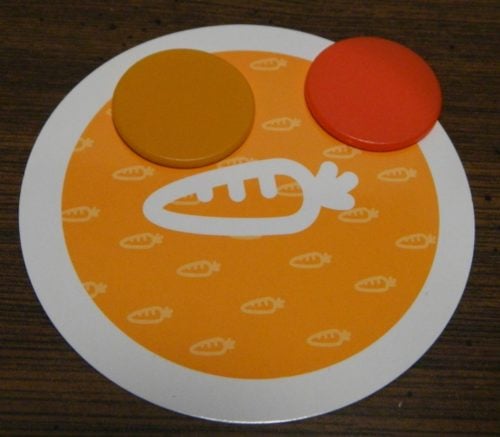 The orange player has two tokens in their pile. They will roll two dice on their turn.

The current player will roll all of their chosen dice at the same time. They will then move tokens around based on what symbols are rolled. 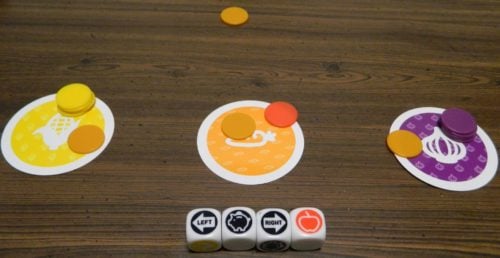 Each token may only be moved once each turn.

After a player has dealt with all of the dice they rolled, play will pass to the next player clockwise.

A player is eliminated from the game when two conditions are met.

The orange player has no tokens in their own pile so they won’t roll any dice on their turn until they acquire some tokens. They will not be eliminated from the game though because their own tokens are controlled by two different piles.

The game ends when only one player remains. That player wins the game. If the bank holds all of the remaining tokens, the bank will win the game.

My Thoughts on Farming Dice

After playing Farming Dice I don’t know exactly what to think about the game. At first glance the game looks like your typical dice game and in some ways it is. You mostly just roll the dice and take actions based on what symbols you roll. Unlike a lot of dice games though there are no particular combinations that you are supposed to roll in order to score points. Instead the game feels like more of a game of survival. Each turn you are just trying to survive and possibly eliminate some of your opponents along the way. Outside of the fact that the gameplay revolves around rolling dice, Farming Dice doesn’t share a lot in common with most dice rolling games. While I have probably played a game similar to Farming Dice at some point, no games immediately come to mind. The gameplay for the most part comes down to manipulating the locations of the tokens which is driven by two things.

First the number of tokens you have in front of you determines how many dice you get to roll. The more tokens that you control the more dice you can roll. If you have no tokens you don’t get to roll any dice and your fate is up to the other players. You would naturally think that the player with the most tokens is in the best position to win the game since they will get to roll more dice. After playing the game I don’t know if that is the case. They will roll more dice, but since most of the sides of the dice have you move tokens to other piles you can lose your pile of tokens pretty quickly. The “lead” in the game seems to change rapidly as one player can have the most tokens and a couple turns later be eliminated from the game. The main thing with tokens is that you want to control your own color tokens and hold at least one token at all times so you don’t have to worry about being eliminated.

This brings me to what appears to be the most important mechanic in the game. Instead of controlling the most tokens, the most important thing in Farming Dice is trying to find ways to group the other players tokens into piles that are not their own. The key to doing well in the game is utilizing the symbols you roll in order to group tokens of the same color together. Getting the other player’s tokens together is important because that is the only way to win the game. Once you get all of the tokens together into a pile that doesn’t belong to the corresponding player you can try to eliminate that player. There aren’t many opportunities to take tokens from other players but if you can prevent giving tokens to this player they will naturally start losing tokens and will be eliminated.

For the most part I would say that Farming Dice is quite simple. You basically just roll dice and move tokens between the different piles. You could teach the game to new players within just a couple minutes. The game has a recommended age of 7+ but I think kids younger than that could play the game even if they might not understand all of the strategy behind the game. Farming Dice is a game that basically anyone can play even if they aren’t a big fan of board or dice games. The game should also be pretty quick most of the time as long as players don’t keep passing tokens back and forth due to dice rolls. I would guess most games will take around 20 minutes which means that the game could work as a filler game.

As for strategy versus luck it is kind of hard to exactly pinpoint where Farming Dice lies. As pretty much all of the gameplay relies on what symbols you roll on the dice, luck will play a role in the outcome. A player that does a good job rolling blank sides when it is their time to roll will have an advantage in the game. Players who keep rolling symbols that force them to give up tokens will have a hard time winning. Rolling the dice is not the only thing that determines a winner though. How the players decide to move the tokens between the piles has a huge impact on what happens in the game. Only one dice face really gives you a choice of taking tokens from the other players’ piles. Most of the sides force you to move a token from your pile to another pile. Your decision making mostly comes from which tokens you decide to pass. Players that do a good job manipulating the positions of the tokens can improve their odds in the game quite a bit. This won’t be able to overcome bad dice roll luck, but players do have some impact on their fates.

I ultimately had some mixed feelings about Farming Dice. I had some fun with the game, but it is not the most engaging game. I give the game some credit for creating an unique gameplay experience. Figuring out how to manipulate the positions of the tokens can be interesting and provides some strategic options. I could see some people finding the gameplay to be really interesting. The problem is that the gameplay became boring rather quickly. I don’t know exactly what it is but it just feels like the game is missing something. After a while it just feels like you are rolling dice and moving tokens around. Your decisions feel a little obvious where the game feels like it plays itself. Farming Dice is not a bad game as I would play it if someone else wanted to. I don’t really see it as a game that I would actively pursue playing though.

One thing that doesn’t help Farming Dice is that the game’s theme is basically nonexistent. The gameplay really has nothing to do with farming. If you took the crop symbols off the dice you could apply any other theme to the game and it wouldn’t impact the gameplay in the slightest. I am not usually a big stickler for themes but the theming in Farming Dice just feels kind of lazy. It just feels like the designers decided to go with the farming theme to try and attract people interested in a farming theme. I think the idea of a farming dice game actually sounds really interesting. Its too bad little effort was put into making Farming Dice that game.

As for the components I would say that they are pretty average to a little below average. The game may not utilize a lot of artwork, but I think it is pretty good. I like that the dice are pretty large and the symbols are easy to interpret. The symbols are only painted on though so they will likely fade off after extended play. The dice also feel a little light where they feel kind of cheap. The crop cards don’t serve much of a purpose outside of reminding players which color they chose. The tokens also feel a little cheap. Basically the components serve their purpose but don’t do much else.

Should You Buy Farming Dice?

Farming Dice is one of those games that I can’t quite put my finger on. There are things that I like about the game and yet it feels like the game is missing something. When you look at Farming Dice it looks like your typical dice rolling game. In action the game plays quite a bit differently as outside of rolling dice it doesn’t share a lot in common with your typical dice rolling game. Farming Dice is basically a game about manipulating the positions of the tokens. You want to hold enough tokens that you can roll dice and not be eliminated. It is more important though to get the other players’ tokens into the same pile (not controlled by them) as this can eliminate them from the game. This leads to a simple game that is easy to learn and quick to play. It relies on quite a bit of luck like most dice rolling games, but there are decisions to be made that will have an impact on the outcome. Farming Dice deserves some credit for doing something new, but there is just something missing from the game. The game just became kind of boring after a while.

I thought Farming Dice was an okay game but not something that I will actively pursue playing again. If you don’t really like dice rolling games or think the game’s concept doesn’t sound all that interesting, the game probably won’t be for you. People who think the concept sounds interesting though may enjoy Farming Dice and I would recommend they pick it up if they can get it for a good price.