Place each monster machine card in the center of the table with the + symbol face up. Shuffle all of the creature cards and deal cards out based on the number of players:

The game consists of as many rounds as there are players. Each player will start one round. On a player’s turn they play one card if they are able to. If a player is unable to play a card they must pass their turn. The rules for playing cards are as follows:

If a player is able to play a card of the exact same number as the card on the top of a pile, the player has the choice of a special ability. 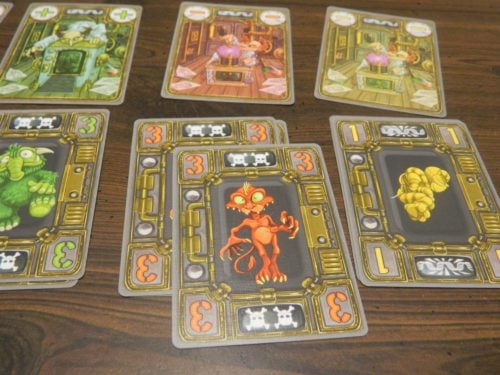 The play can either:

This player had three cards in their hand at the end of a round. This player would get three penalty points due to two skulls on one card and one skull on another card.

A new round is then played if each player has yet to start one round.

The game ends when each player has started one round. Players compare their scores and whichever player has the least negative points wins the game.

Crazy Creatures of Dr. Gloom is like most casual card games like Uno whose goal is to be a quick easy distraction. While Crazy Creatures of Dr. Gloom plays quite a bit differently than Uno, it does have a very similar feel to it. The game is really easy to play. The game takes just minutes to learn and only requires very basic math skills so younger children can play the game. The game has a recommended age of 7+ but younger children could play the game if they have solid counting skills.

While it is not highly original, I had fun with Crazy Creatures of Dr. Gloom. While it feels like Uno, I think the game has more strategy to it than Uno does. The strategy is not particularly deep but you have more impact on the outcome of the game than you do in a game like Uno. Most of the strategy comes from deciding which cards to play at a given time. In most cases you are going to want to play a middle card (2-5) if you can since they are the hardest cards to get rid of in the game. Plus these are the cards that give you negative points at the end of the game if you don’t get rid of them. If you can match a card already on the table though, you should take advantage of that.

One rule I like in the game is the fact that everyone gets one final turn once a player plays their final card. I like this idea because it makes it more likely that all of the players will get the same number of turns. Otherwise the players who play earlier in a round would get an advantage in the game. While the player who plays first in a round probably has an advantage, I don’t see a significant advantage since the first player did not win every hand of the game that I played. There was actually one hand where no one was able to get rid of all of their cards.

While the game has some strategy, it shouldn’t come as a surprise that there is quite a bit of luck in the game. The player who is dealt the best cards has the best chance of winning a hand. The two best cards are ones and sixes. These two cards are the best since they are the easiest to play and they don’t give you any negative points if they are in your hand at the end of the round. Another benefit of these cards is that since they are easier to play it seems more likely that you can play them to match other cards and thus get one of the two bonus abilities. The middle cards are considerably harder to play and are worth negative points at the end of the round which means a player that is dealt a lot of them doesn’t have a good chance of winning a round.

I think the game’s biggest problems come from the abilities you get by matching a card. The biggest problem comes from being able give other players cards. I personally think this mechanic creates a serious problem and should be removed from the game. The problem comes from the fact that the mechanic allows players to gang up on the player in first place. The best way to illustrate this is to give an example. After two rounds one player was considerably ahead of the other three players. All of the other players then had to gang up on this player in order to catch up. Almost every player choose to give this player another card when they had the chance to. This player ended up going from first place to third place. I don’t have a problem with games having a catch up mechanic but I hate it when games make the catch up mechanics so powerful that it makes you not want to get an early lead and lets players go from first to last easily.

On the other hand I think the ability to flip over one of the machines is not powerful enough. Being able to flip a machine card can really help a player. The problem is that by the time it gets back to the player who flipped it, it is likely that one or more players have already played on that pile which might have already ruined the player’s strategy. This might be a little too powerful but I think the player who flips one of the machine cards should also be able to play another card on that pile so they can at least benefit a little from flipping over the card.

Components wise the game is what you would expect from casual card games. The card quality is good. The game’s theme doesn’t play any real role in the game, but the artwork is well done. I appreciate that the game included different artwork for each color/number combination since most games would have just had one piece of artwork for every card of a particular color. The card layout is also well done making it easy to find what you need on any particular card. I am also kind of a sucker for tins and the tin is quite small so the game doesn’t take up a lot of room on your shelf.

Crazy Creatures of Dr. Gloom is the basic definition of a solid but unspectacular game. The game is a fun filler if you need a quick easy card game. The game doesn’t do anything particularly new though. The game plays a lot like Uno or other simple mainstream card games. That is not necessarily a bad thing but Crazy Creatures of Dr. Gloom doesn’t really do anything to jump out and make you have to play the game.

If you would like to purchase Crazy Creatures of Dr. Gloom you can purchase it on Amazon, here