How to Play Bulldog Dozer

Place one I beam on each space around the edges of the board. Each player chooses one of the corners of the board and takes the corresponding floors. Place the bulldozer in the center of the gameboard. The youngest player gets to start. 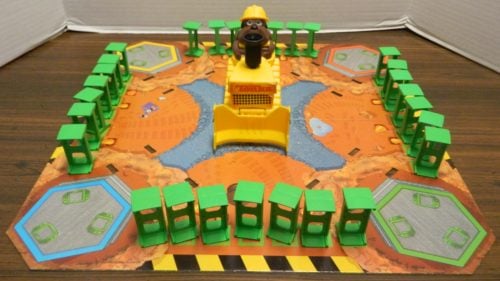 A player’s turn begins by spinning the spinner. The player takes an action based on what they spin.

Take One: The player chooses one I beam on one of the spaces around the board (not part of another player’s building) and adds it to their own tower. If the I beam is the third beam on the current floor you add the next floor to your tower. 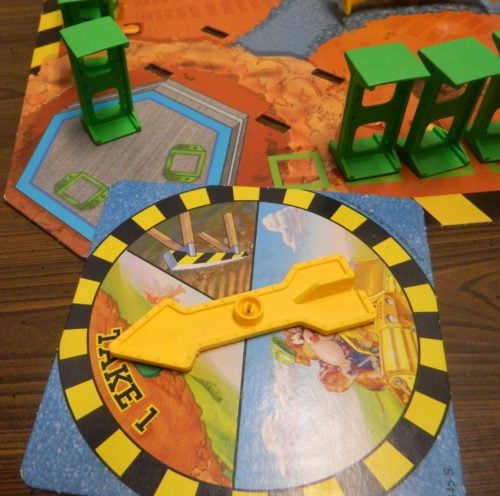 The player has spun take one. The player takes one I beam and adds it to their section of the gameboard.

Sawhorse: Take “Freddy the Foreman” and place it in front of your building which will prevent your tower from being knocked down by the bulldozer. 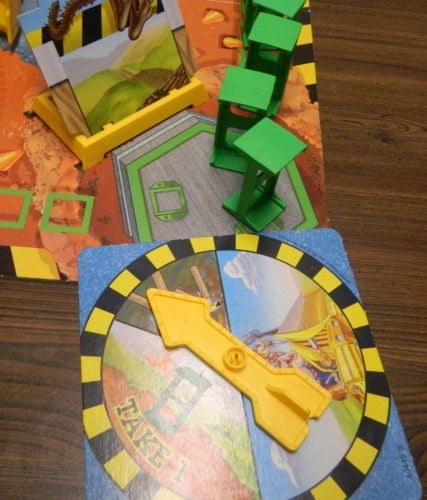 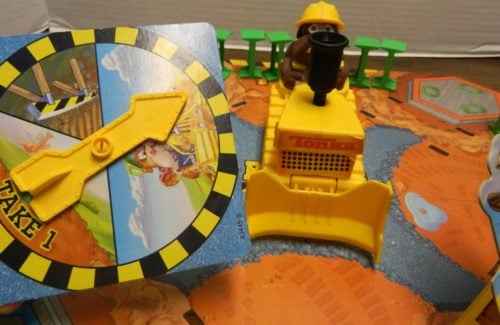 The player has spun the bulldozer which allows them the opportunity to knock some I beams off the gameboard.

The player who spun the bulldozer will take I beams as follows:

When a player has completed all three levels of their tower (three beams per tower), they place the top floor/flag on the top of their tower and they win the game. 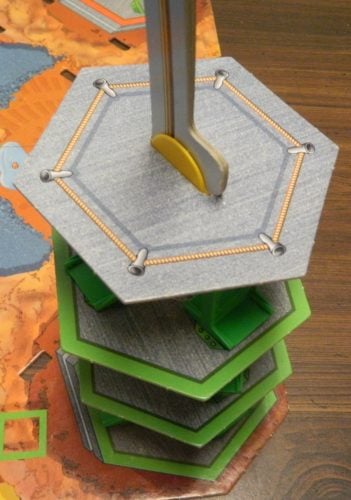 My Thoughts on Bulldog Dozer

While I was hoping that Bulldog Dozer would be a good children’s game, it just doesn’t work for two reasons.

Outside of the issues with the bulldozer, the game’s components are decent. The plastic beams are nothing special but they are sturdy and should take the beating of getting regularly knocked around. The cardboard pieces are pretty thick but they will take quite a beating with extended play. Otherwise the artwork is basically what you would expect out of a 1990s Parker Brothers children’s game.

It is too bad that Bulldog Dozer isn’t that good of game since the idea of knocking over other player’s towers with the bulldozer could have made for a good children’s game. It is kind of fun to see the bulldozer knock down the towers but there just isn’t anything else to the game. This is why I think Bulldog Dozer will only possibly appeal to three types of people. First young children (8-10 and under) could enjoy the game quite a bit more than I did. Second I could see parents enjoying the game with their younger children mostly because their children are enjoying the game. Finally adults who have had quite a bit to drink or under the influence of another substance might have some fun with the game. Otherwise I have a hard time believing that an adult or older children would get much enjoyment out of Bulldog Dozer.

Should You Buy Bulldog Dozer?

Personally I just don’t see Bulldog Dozer being a good game. The game had some potential since the idea of using a bulldozer to knock down other player’s towers could have made for a good children’s game. The problem is there is so little to the game. You basically just spin the spinner and hope to use the bulldozer to knock a lot of beams off the gameboard. The game relies almost entirely on luck. While young children and their parents might get some enjoyment out of the game, I can’t really see adults or older children getting much enjoyment out of the game.

Basically if you don’t have young children who enjoy these type of games, I wouldn’t recommended Bulldog Dozer. If you can get a good deal on the game though and have younger children to play the game with, it may be worth picking up.