Originally created in 1970 the children’s board game Buckaroo! has been in print ever since. Over the years the game has even went by several names including Ali Baba, Crazy Camel, and the Kangaroo Game. While Buckaroo! is a pretty popular children’s game I never actually played the game when I was a child. Having no fond memories of the game from my childhood I can’t say I had high expectations for it. It just looked like another generic children’s dexterity/stacking game. I can see Buckaroo! working well with children but it doesn’t do enough to appeal to anyone other than the youngest children.

How to Play Buckaroo!

The first player will have to place the saddle on the blanket. 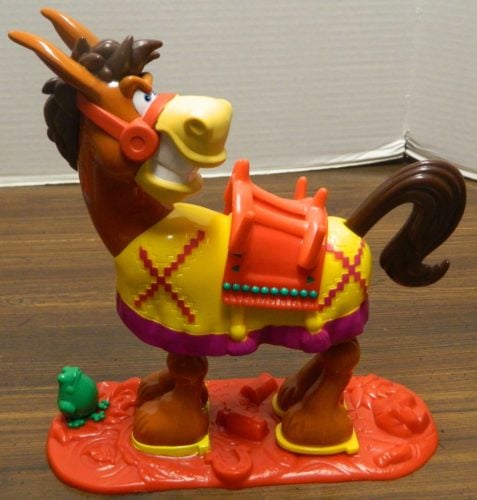 The first player has added the saddle to the mule.

Afterwards each player chooses an item and places it on the mule. The player can either place the item on one of the hooks on the saddle, place it on the saddle itself, or they can hang it off another item. 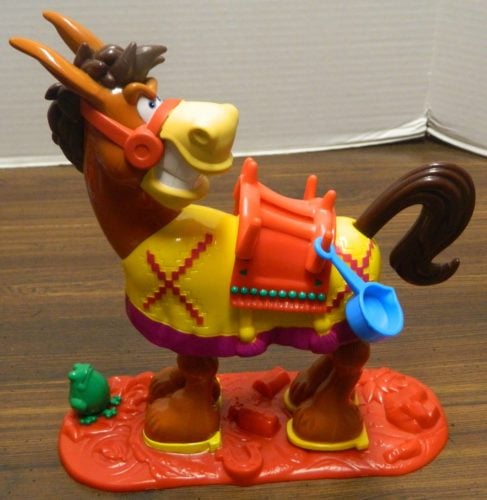 This player has added a pot to the saddle.

After placing a piece one of three things will happen:

A player can win the game in one of two ways:

My Thoughts on Buckaroo!

While it should be pretty obvious due to the fact that the game has an age recommendation of 4+, Buckaroo! is a game made for younger children. The game is pretty much your basic children’s dexterity/stacking game. Players take turns placing items onto the back of the mule. They try to place the items in a way where they won’t fall off the mule. The players also need to be careful to not put too much pressure on the mule’s blanket though because it will trigger the mule to buck which will eliminate the player. As this is basically all there is to the game young children should have no trouble understanding how to play the game.

I didn’t play Buckaroo! with any young children but I believe they would enjoy the game. The game is simple to play and I think a lot of children will like the theme. The game is also quite short with most games lasting less than five minutes. The only concern I would have for younger children is it is possible that they would be scared when the mule bucks. I like to compare the mule to a Jack-in-the-Box. The mule can suddenly buck which could startle and scare some children. Basically children that would be scared by a Jack-in-the-Box might not like this aspect of Buckaroo! While some kids might be scared, I actually think a lot of young children will laugh when the mule does decide to buck.

The lack of strategy is disappointing but is to be expected from a game that was clearly made for children. The bigger problem comes from the gameplay itself. The problem is that unless you are extremely careless it is going to be hard to ever make the mule buck. We first tried the game using the easiest difficulty and we didn’t even have to be that careful when placing items on the saddle and the mule never bucked. Outside of purposely pushing down on the blanket I don’t see you making the mule buck under the easiest difficulty. We then moved the difficulty up to the highest level. At this level the mule bucked once but it was after most of the items were already placed on the saddle. While the mule will occasionally buck at the highest difficulty level it is still too easy to place items without having to worry about triggering the mule to buck.

If you want an easy game this might not be that big of a problem. For most people though this hurts the game quite a bit. Stacking games just aren’t that interesting when there is not that much risk of knocking off/triggering the contraption. I am actually kind of curious if this was intentional or not. I could see the game being designed in this way to make it easier for young children as that is the target audience after all. I don’t know why they made the highest difficulty still pretty easy though. The other option is that the mule was just not designed that well which is why it is hard to trigger. I ended up playing the 2004 version of the game and it sounds like the earlier versions of the game were easier to trigger so I have a feeling it might be some of both.

Since it is surprisingly hard to get the mule to buck, most games are going to come down to placing the items in a way where they don’t fall off the mule. Outside of the one time that the mule bucked, all of the other players were eliminated due to a piece falling off the mule. It is really easy to place the first items on the mule but it becomes quite a bit harder once all of the pegs on the saddle have been used. The problem arises since there is not a lot of room on the saddle and some of the items that you have to place are pretty bulky. Thus you will eventually run out of spaces where you can safely stack items. Unless the players do a good job maximizing the pegs, you will likely get to the point where you have to just stack items on top of one another. When you get to this point players need to hope that they get lucky that the item they placed doesn’t slide off the mule.

In some ways I like that the game limits the available space on the mule and in other ways I think it really hurts the game. The good thing about limiting the space is that this is basically the only mechanic that adds any difficulty to the game. If the game gave you plenty of room to place the items, it would be almost impossible to eliminate any of the players. The problem though is that it becomes kind of random who ultimately wins as players will be eliminated because they were unlucky and had their item slide off.

This adds to the already high reliance on turn order. Turn order can play a large role in how well you do in the game. First off the players that get to play more pieces before the saddle is completely covered have an advantage since they don’t have to place their item in a riskier area where it is more likely to slide off. The bigger reason why turn order matters involves the end game. For some reason the designers decided that if all of the pieces are added to the mule the player who plays the last piece wins. I think this a terrible way to end the game since all of the other players still in the game didn’t mess up either. So why does the last player to play a piece get to automatically win the game just because they got to place the last piece? Most of these type of games just keep the game going by having the players start to take off the pieces if they all are successfully added. While I don’t love this option it is better than what Buckaroo! decided to do.

Should You Buy Buckaroo!?

Buckaroo! is the very definition of a very generic dexterity/stacking game. If you have played one of these games before you should already have a good idea of what it is like playing Buckaroo! With how simple and quick the game is I think young children could enjoy the game quite a bit. Unfortunately the game doesn’t really appeal to anyone else. It is not surprising that the game has next to no strategy and relies pretty heavily on luck. The biggest problem is that the stacking mechanic doesn’t really even play that big of role in the game. Unless you are careless it is really hard to get the mule to buck. Players will mostly be eliminated due to them having no area to place an item which leads to items sliding off the mule. This means that turn order is regularly a determining factor in who wins. Ultimately you are left with a very generic game in a genre that has significantly better options.

If you don’t have young children who like these type of games I would not recommend purchasing Buckaroo! If you do have younger children though I would only recommend Buckaroo! if you can find it for a couple dollars.

If you would like to purchase Buckaroo! you can find it online: Amazon, eBay