During its run Milton Bradley published a lot of board games. Some of these were huge hits that are still printed to this day. Many others are not so well known as they were basically forgotten to time. Most of these games were forgotten for a good reason as they aren’t particularly good games. Occasionally you will find a diamond in the rough though which is why I like to check out these games every so often hoping to find a true gem. Today’s game is Back Off! Buzzard which was released back in 1990. I can’t say that I had high expectations as it looked like your typical children’s game. I was a little intrigued though because the game reminded me of Loopin’ Louie which was arguably one of my favorite board games growing up. Back Off! Buzzard has some interesting ideas and the buzzard mechanic will probably please children, but the game lacks any sense of substance leading to a pretty dull game.

How to Play Back Off! Buzzard

Back Off! Buzzard is played over a number of rounds. Each round consists of the following six steps.

#1 Draw Cards – Each player will draw the top card from their draw pile. Players can look at their own card, but they should keep it secret from the other players.

#3 Move An Explorer – Starting with the player with the Buzzard Card and moving clockwise each player will play their card and take the following action. See the Moving An Explorer section below for more information.

#4 Discard Cards – After everyone has finished taking the action printed on their card all of the cards will be discarded. Each player forms their own discard pile. When a player’s draw pile runs out of cards they will shuffle their discard pile to form a new draw pile. 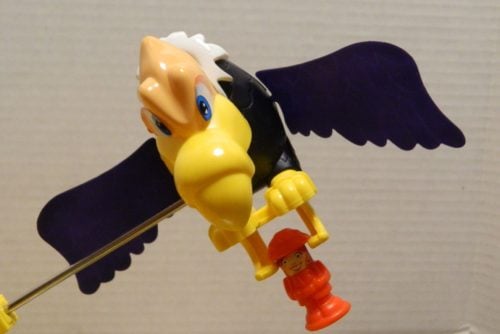 This red explorer was picked up by the buzzard. When it is dropped it will be returned to the red player’s start space.

In Back Off! Buzzard there are three types of cards. Each card allows a player to take a different action with one of their explorers. 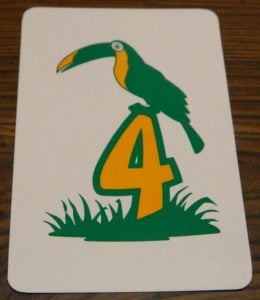 Number Card: When a number card is played the player will be able to move one of their pawns clockwise around the board the corresponding number of spaces. Each space that features an arrow counts as a space. 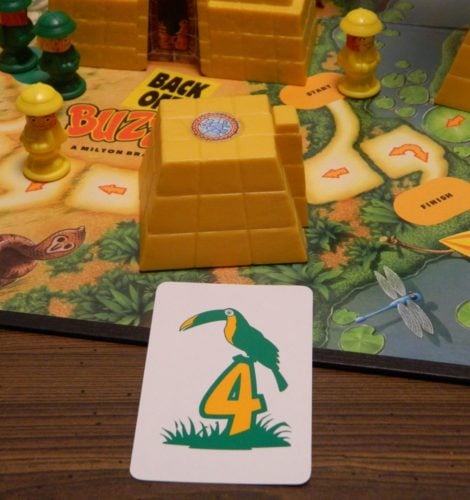 The yellow player played a four card so they moved one of their explorers four spaces.

When moving an explorer the following rules must be followed: 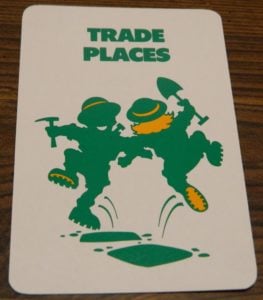 Trade Places Card: When this card is played you must swap the position of one of your explorers with the explorer of another player. Only explorers on the gamepath or on the top of a pyramid can be exchanged. If there are no valid exchanges the player takes no action with the card. 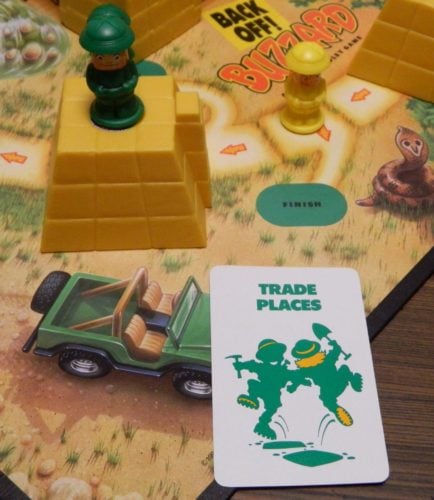 The green player played this Trade Places card. They should use the card to swap the position of their green explorer on the pyramid with the yellow explorer next to their finish space. 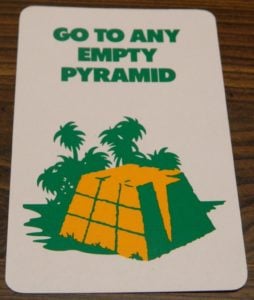 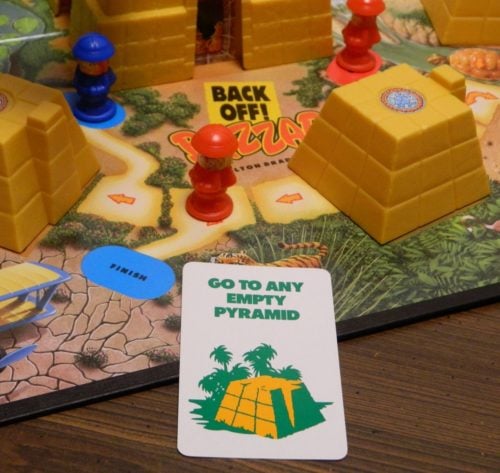 The blue player played the Go to Any Empty Pyramid card. Their best option is probably to take the pawn from their start space and move it to the pyramid on the right as it is the closest to their finish space.

The first player to get both of their explorer pawns to their corresponding finish space wins the game. 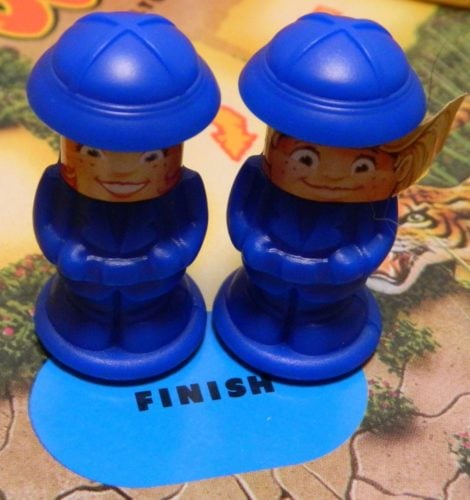 The blue player has gotten both of their explorers to their finish space so they have won the game.

My Thoughts on Back Off! Buzzard

As I mentioned at the beginning of this review I had mixed feelings about Back Off! Buzzard. For the most part I thought it was going to be your traditional “roll and move” game where players had to reach the finish with their pawns. Obviously this was with the dice rolling being replaced with playing cards. With regards to this element of the game my initial expectations were spot on. This aspect of the game is similar to many children’s games. In a lot of ways Back Off! Buzzard reminded me of games like Sorry!.

Outside of the mechanical aspect which I will get to later, the thing that intrigued me about Back Off! Buzzard was the fact that the game used cards. Using cards for a roll and move style game is not highly original. What I found interesting though was the fact that the game actually added a little decision making to drawing and playing a card. Instead of just drawing and immediately playing a card, the current player gets to choose whether they want to play the card they drew or whether they want all of the players to pass their card. I found this to be pretty interesting mechanic for a children’s game released in 1990 as this seems more like a mechanic that would be used in more recent games.

In this regard I give the game some credit. I will admit that it doesn’t add a lot of strategy/decision making to the game as it is usually really obvious what decision a player should make. I applaud the effort though because most children’s games in that era would just have players draw cards and do what they said. Giving players this option reduces the amount of the luck a little as you can choose to pass cards if you get stuck with a bad card. This also adds some basic risk reward as you need to decide whether it is better to stick with the card that you already have or try for a better card. Unless the other players have an obvious tell you are still making a random guess, but choosing between keeping your own card or passing cards will likely have a pretty big impact on who ultimately wins.

While I liked this little twist, the cards for the most part don’t help Back Off! Buzzard. The game relies almost entirely on luck as the cards you have to play will determine who will win. There are a couple minor decisions here and there, but the cards ultimately decide who is going to win. I attribute a lot of this to the fact that most of the cards don’t really give you many options for what you can do with them. With a number card you can only choose which of your pawns to move. The empty pyramid cards give you an obvious decision as you might as well move one of your pawns to the pyramid that is closest to your finish. The trade places card gives you a few more options, but there is usually a really obvious best option.

In addition to having few decisions to make, the cards themselves are not balanced at all. The number cards are almost always the worst cards to get stuck with. Except for when you get close to your finish space they don’t serve much of a purpose as you move much quicker using the other cards. The empty pyramid cards are really strong especially if the pyramid right next to your finish space is open as it allows you to ignore most of the board. These do carry a little risk though as the buzzard can take your explorer sending it back to your start space. The risk isn’t that high though as you will likely sooner or later draw another of the cards which will put you right back to where you were. The trade places cards are also quite powerful as you can really help yourself while hurting one of the other players.

Due to the lack of decisions and the reliance on luck there ultimately isn’t much to the game. Back Off! Buzzard really lacks substance as the game basically boils down to playing a card and taking the corresponding action. In many ways the game almost plays itself as there are no really meaningful decisions in the game. Thus Back Off! Buzzard becomes boring pretty quickly. As the game only has three different types of cards it eventually feels like you are doing the same things over and over again. You will make some progress which will then be undone by another player landing or your space, a card being played, or the buzzard picking up your pawn. This back and forth continues until one player eventually wins the game. Outside of nostalgia or getting enjoyment through the children that you are playing the game with, adults aren’t going to get much out of Back Off! Buzzard.

That said I think younger children could really enjoy the game. The game is really simple as it can be taught in just a couple minutes. Children only need basic reading skills and the ability to follow a couple basic rules in order to play the game. The game also only takes around 15-20 minutes to finish so it doesn’t drag on. I think the main reason that children will enjoy the game is the buzzard itself. Its impact on the gameplay is kind of minor as it only hits two pyramids every turn and follows a predictable pattern. Even as an adult I still think the buzzard is kind of cool in how it picks up the explorers and moves them around the board. I think younger children will really like that aspect of the game.

Should You Buy Back Off! Buzzard?

At the end of the day it isn’t all that surprising that Back Off! Buzzard was mostly just forgotten about. There are some elements of the game that I found to be interesting. I thought the idea of players choosing between keeping their own card or passing cards was interesting as it feels a little before its time. The buzzard mechanic doesn’t play a huge role in the game, but it is kind of cool especially since it likely lead to the creation of Loopin’ Louie. The problem is that there just isn’t much to the actual gameplay. You basically just play a card and do what it says until someone gets both of their explorers to the finish. The game has a couple decisions, but they are usually really obvious. Thus the game relies almost entirely on luck and is ultimately kind of boring. I could see young children having fun with the game as it is really easy to play and kids will like the buzzard mechanic. Ultimately I didn’t really care for Back Off! Buzzard as its problems overshadow its positives.

For most people I would recommend passing on Back Off! Buzzard as they won’t get much out of the game especially since it appears to be somewhat rare. I can only see recommending the game in two situations. First if you had the game when you were a kid and really liked it, I could see nostalgia overcoming the game’s other problems. Otherwise I think young children will probably enjoy the game.

Buy Back Off! Buzzard online: Amazon