How to Play Ad-Lib Crossword Cubes

Each turn will begin with the current player rolling all of the cubes. The sand timer is then turned over. 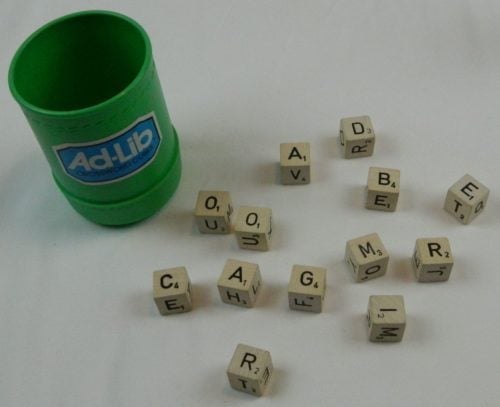 This player has rolled the cubes. They will have to try and form words with the letters that were rolled.

The current player will look at the top face of all of the cubes that they rolled. They will try to form words with the letters in a crossword fashion. Players may only form words that can be found in a standard dictionary. They may not use proper nouns, abbreviations, slang, or foreign words.

This player began by forming the word “game”. 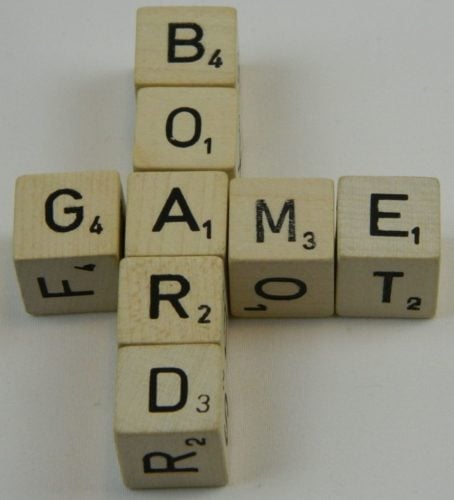 For their second word this player formed the word “board”.

Dice that feature a diamond shape are treated as wilds and can be used for any letter. If the wild is used for two different words though, it must represent the same letter for both words. 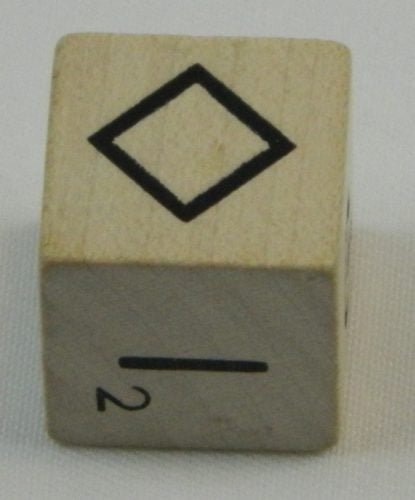 Here is a picture of the wild symbol from the board game Ad-Lib.

Players may rearrange their cubes as many times as they want until the timer runs out. All of the formed words must be a part of one crossword.

When the timer runs out, players will determine their score. Each cube has a small number printed on it which is how many points it is worth. Wild dice are worth zero points. Each player will count up the points from all of the horizontal and vertical words that make up their crossword. The letters used in two words will be scored twice.

The player will then subtract points from all of the cubes that they weren’t able to use in their crossword.

The current player will record their score and will pass the dice to the next player to the left/clockwise.

The game ends when the agreed upon number of rounds/points have been completed. The player that scored the most points wins the game.

My Thoughts on Ad-Lib Crossword Cubes

In many ways Ad-Lib Crossword Cubes shares a lot in common with your typical word game. Players are given a set of letters which they have to try and form into a crossword. In a lot of ways it reminds me of Scrabble. The game tries to differentiate itself by utilizing dice instead of tiles. Basically players take turns rolling the dice and trying to quickly form words with the letters they rolled. Players will score points based on the dice that they are able to form words with, and they will lose points for those letters that were left unused. None of this is particularly original as there are many other word games with a similar premise.

The one area where Ad-Lib Crossword Cubes tries to differentiate itself is with the scoring. The scoring in a lot of ways reminds me of Scrabble. In fact the game plays a lot like a speed solitaire Scrabble. Basically each letter in the game is assigned a value based on how hard it is to use. When you use one of these tiles you will score the value of the token. If you use the letter in two words, you will score the points twice. As the game rewards you more points for using more difficult letters, this ultimately leads you to try and use the most valuable letters in a way where you can use them for two different words. To increase your score you really need to try to maximize these high value letters.

I personally had some mixed feelings on the game’s scoring system. I do think it was wise to reward players with more points if they are able to use more difficult letters. Some letters are considerably harder to use than others, and you should be rewarded if you are able to use them in time. Spill and Spell relies more on creating long words. The length of words doesn’t matter all that much in Ad-Lib Crossword Cubes as it is much more important to try and create words that utilize the valuable letters twice. This seems to create a greater emphasis on knowing more words to give yourself more flexibility.

I wouldn’t say that Ad-Lib Crossword Cubes has much strategy as it is pretty obvious what you should try to do on every turn. Whether you are successful at that though, really depends on how skilled you are at the game. The game actually relies on quite a bit of skill. Players who generally are pretty good at word games are likely to be better at the game than those who generally struggle with these types of games. Players with a large vocabulary will have an advantage in the game as they will be able to come up with more options for how to use the letters they roll. The game also relies on a speed element though. As you only have a limited amount of time, you need to think of words quickly or you are going to get stuck with a lot of unused letters. The player that does the best job combining their vocabulary with the ability to come up with words quickly, will greatly improve their chances of winning the game.

As the basic gameplay boils down to rolling dice and using the letters that were rolled, it should not be all that surprising that it is a fun yet simple little word dice game. Those who have played another similar dice game before, should be able to pick up Ad-Lib Crossword Cubes within a minute or two. Those that haven’t played one of these types of games before, should still be able to pick up the game really quickly. The game has a recommended age of 8+ which seems about right. As long as you have decent spelling skills you shouldn’t really have any trouble playing the game. I think the game could even have some educational value as it could help children with their spelling skills. Due to the game’s simplicity it also plays pretty quickly as I would estimate that most games can be finished in 20-30 minutes. Ultimately Ad-Lib Crossword Cubes is a fun little game as the basic mechanics of trying to rearrange the dice to form words quickly is satisfying.

I had fun with Ad-Lib Crossword Cubes, but it does have many of the same issues as most of the other dice rolling word games.

As Ad-Lib Crossword Cubes relies on rolling dice, it is not that surprising that the game relies on quite a bit of luck. More skilled players can improve their odds, but there is nothing that a player can do to overcome bad luck. Luck comes from a couple different areas. First you need to hope that you roll letters that work well together. If you roll few vowels or letters that don’t work well together you are going to have a hard time using most of your dice. The other area where luck comes into play is with the more valuable letters. These letters are harder to use so you don’t want to get too many of them. They are also the key to scoring lots of points so if you don’t get any your score will be limited no matter how well you do. Luck will play a pretty big role in how many points you ultimately score in a round.

The second problem I had with Ad-Lib Crossword Cubes can be summed up by the fact that I just reviewed Spill and Spell. Like Spill and Spell, Ad-Lib Crossword Cubes is not a particularly original game. The basic gameplay between the two games are exactly the same. The only real difference is the number/distribution of the dice and the scoring. While each game’s scoring emphasizes different things, this does not drastically change the game. It is not just Spill and Spell though, as there are a bunch of other word dice games that have been released which don’t really differ all that much from one another. In fact while it has a different name, Scribbage is apparently the exact same game as Ad-Lib Crossword Cubes. Because of their similarities, if you have played one of these type of games before, you pretty much have already played Ad-Lib Crossword Cubes.

The final problem is that while Ad-Lib Crossword Cubes can support any number of players, it is not really much of a multiplayer game. Basically players take turns playing the game, and then comparing their scores at the end of the game. There is literally no player interaction in the game. Therefore a lot of the game entails waiting around for the other players. For this reason I would highly recommend limiting the number of players. I honestly think the game would work best as either a two player or even a solitary game. Playing the game by yourself would just entail comparing your score to previous games to see if you can beat your previous high scores.

Should You Buy Ad-Lib Crossword Cubes?

For the most part Ad-Lib Crossword Cubes is pretty similar to most other word dice games. You roll the dice and try to create words with the letters that you rolled. Outside of some slight tweaks to the scoring, the game doesn’t really change all that much about the formula. Despite this I still found the game to be fun. It is easy to play and there is just something satisfying about trying to form words quickly with the letters that you end up rolling on the dice. There is a decent amount of skill to the game as it emphasizes trying to use the letters that are harder to use in two words whenever possible. Players who generally do well in word games will likely have an advantage in the game. Ad-Lib Crossword Cubes does rely on a decent amount of luck though as the letters you end up rolling will play a role in how well you do. The game is also more of a solitary game than a competitive game as there is quite a bit of sitting around and waiting for the other players. 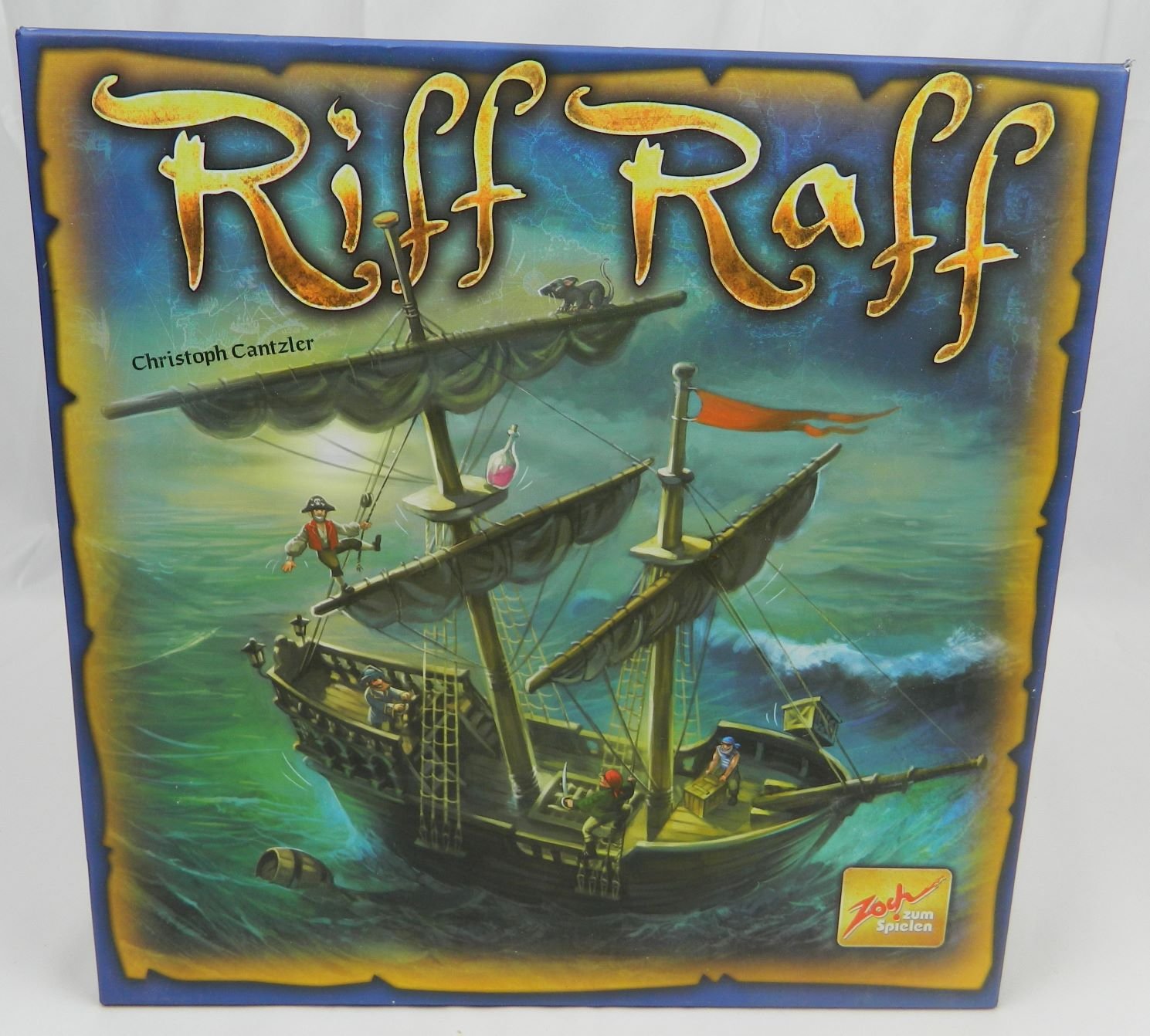